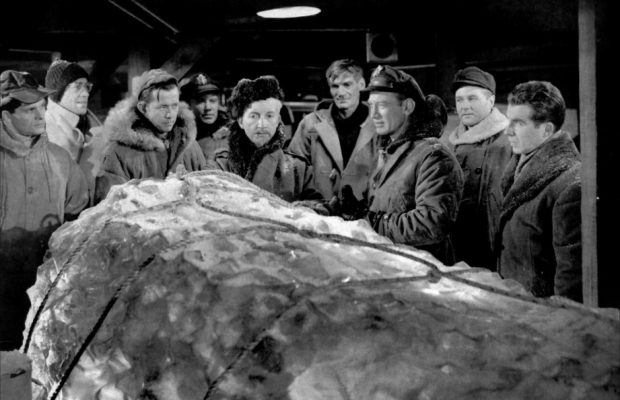 Toronto Film Society presented The Thing from Another World (1951) on Sunday, October 30, 2016 in a double bill with The Body Snatcher as part of the Season 69 Sunday Afternoon Film Buff Series, Programme 2.

Considered one of the all-time great science fiction pictures, tonight’s film ranks second only to King Kong as RKO’s finest genre achievement.  The feature was co-produced by Howard Hawks’ Winchester Pictures Corporation and the main filming was done at the RKO Ranch in Encino, California.  Scientific equipment was borrowed from Cal Tech and three electronics companies were consulted before filming.  Although Howard Hawks took no directing credit for himself, he closely collaborated on most of the filming with credited director Christian Nyby.

In Michael R. Pitts RKO Radio Pictures Horror, Science Fiction and Fantasy Films, 1929-1956 he says: The Thing from Another World is based on a 1938 short story, Who Goes There? by John W. Campbell, Jr., written under the pen name of Don A. Stuart.  Hawks only used the framework of the story and made it more topical by tapping into the then-current UFO-sighting phenomena.  Perfectly paced, wonderfully acted and establishing just the right balance between the horrors it presents and the protagonists who must deal with them, the movie was perfect for its time and retains great entertainment value.

Philip Strick wrote in Science Fiction Movies (1976): The most memorable science fiction movie dealing with the resuscitation of aliens.  It is as splendid to listen to as to watch, for the sheer pace and enthusiasm of its dialogue.

Baird Searles wrote in Films of Science Fiction and Fantasy (1988): Adding to the verismo are Howard Hawks’ uncredited direction, and the realistic, overlapping dialogue that give a near documentary feel to much of the action.  These factors, plus the claustrophobic device of the isolated circumstances, make for a truly scary film.

The film is set in an Arctic Research Station where the crew discover a UFO buried in the ice. When they expose the UFO, an alien begins to wreak havoc on the crew. Kenneth Tobey is Captain Hendry, the military commander of the Air Force group sent to investigate the crash of the UFO. Tobey is a familiar actor who appeared in a number of 1950s science-fiction movies, including The Beast from 20,000 Fathoms and It Came from Beneath the Sea. After appearing on Broadway in a number of flops, he was in a hit called Janie (1942) that ran for nine months. He left that to appear as Gregory Peck’s brother in Irwin Shaw’s Sons and Soldiers (1943) and Elmer Rice’s A New Life (1943). He appeared in two Maxwell Anderson plays: Truckline Café (1946), alongside newcomer Marlon Brando, and Joan of Lorraine (1946), which was a hit for Ingrid Bergman.

Tobey began playing bit parts in movies shortly after WWII, including as a police photographer in Robert Siodmak’s noir, The File on Thelma Jordan (1950). He had a bit part in I Was a Male War Bride (1949), directed by Howard Hawks. He caught Hawks’ attention, and Hawks told him that he would cast him in a more substantial role. He was given the role in The Thing from Another World in 1951. He was cast in John Ford’s The Wings of Eagles in 1957, opposite John Wayne and Maureen O’Hara. In 12 O’clock High, he played a sentry who is reprimanded by Gregory Peck, his co-star in the play Sons and Soldiers. He was a familiar face in many western films, as well as starring opposite the likes of Audie Murphy. His strong physical appearance often had him playing military men and law enforcement officers.

Throughout the 1950s and 1960s, he had a strong career in television, appearing in many of the popular shows of the era. He had guest roles on Perry Mason; Lawman; Stoney Burke; Biff Baker, U.S.A.; Jefferson Drum; The Rebel; Gunsmoke; and many more. He was given his own series for CBS, Whirlybirds, which ran for three seasons, from 1957 to 1960. It was a major hit in the U.S.A, as well as abroad. It then went into syndication for many years. He worked for Walt Disney, starring as Jim Bowie on the Davy Crockett series. After the Alamo episode, he was cast as a friend of Crockett, called Jocko, in the “prequel” episodes of Crockett’s life. He continued to appear in television shows well into the 1980s and 1990s; most notably on LA Law, Night Court, Star Trek: Deep Space Nine, and Falcon Crest.

Many of today’s directors were weaned on television and the old science-fiction movies that were shown so often. These directors remembered Ken Tobey and often cast him in their films. Joe Dante cast him in the Gremlin movies and The Howling.  Jim Abrahams and David and Jerry Zucker cast him in Airplane. In The Lost Empire (1984), a direct-to-VHS production, and The Naked Monster (2005), a low-budget science-fiction spoof, Ken Tobey appeared in both films as Captain Hendry, his character name from The Thing from Another World. Kenneth Tobey died of natural causes in Rancho Mirage, California in 2002. He was 86 years old.