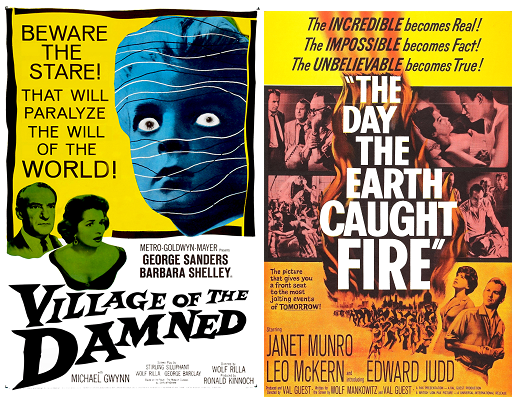 Toronto Film Society presented Village of the Damned (1940) on Sunday, March 4, 1990 in a double bill with The Day the Earth Caught Fire (1962) as part of the Season 42 Sunday Afternoon Film Buffs Series “A”, Programme 7.

Science fiction is essentially a paranoid form.  Whether the destructive force comes from outer space or from our own Mother Nature, it still represents something hidden attacking us–the nice fair-haired boy could be an alien bent on taking over the world, and so could that pile of pumpkins in the back of the truck.  The atomic age, in which man has brought the destruction upon himself, has for obvious reasons been rich in the paranoid: the Bomb lurks in every corner; it is our fault that Godzilla has been unearthed from his cavernous tomb; and any minute now we may be on a collision course with the sun.  Noticed any wild climatic changes lately?  They’re all caused by the Bomb–replaced in the 1980s by “pollution”–you know.

These two films of the early 1960s, both British, beat the drum of paranoia with skillful hands.  And both invoke cult American films of the 1950s to do so more effectively: Village of the Damned, based on John Wyndham’s novel of The Midwich Cuckoos, looks back on that most paramoid of cold-war, but anti-McCarthy pictures The Invasion of the Body Snatchers; and The Day the Earth Caught Fire alludes through its title to The Day the Earth Stood Still, Robert Wise’s no less earnest sermon on the necessity of international understanding and good will; ten years after, perhaps the cataclysm ambiguously approaching at the end may be the fulfillment of what Klatu promised Sam Jaffe (–“You will be eliminated.”–“Such power exists?”)

Village of the Damned explores the oldest of racial (or husbandly) fears, that there is a taint of blood in the family background (or that one’s wife has committed adultery).  That however, enlarges the fear, and has been duly explored in a wide range of works from ancient myth, to The Scarlet Letter, Rosemary’s Baby, and the adolescent fantasies of H.P. Lovecraft (may I avoid the curse of Cthulu for so describing them!).  Village of the Damned opens with an idyllic English village deep in sleep, but no natural sleep, for selected women of the neighbourhood are being impregnated by some supernatural force (so we gather later).  What is produced in the fulness of time is of above-genius intelligence, with burning eyes; and these young cuckoos bid fair to take over the nest.  “Father, I want to talk to you,” one says sternly and patronizingly to his earthly parent, rather chillingly turning the familial tables.

Amidst a group of moderately familiar English character players (Laurence Naismith, for instance, is the village doctor), is George Sanders in a none too common sympathetic role, as the scientist, and “father” to the leader of the precocious band, “whose infant treble,” as The New York Times opined, “is the most ominous human sound we’ve heard since Orson Welles welcomed  in the Martians.”  Killing large groups of attractive looking children can be rather a dicey business–as Laurence Olivier illustrates even in The Boys from Brazil (another analogue for its this picture)–and it is not an act likely to win sympathy for its perpetrator.  But something must be done, and Sanders sequesters these prodigies in an isolated schoolhouse, and there the final duel of wits between the highly intelligent human being and the still more intelligent pupils is played to its finish.  Can they use their power of mind reading to learn what action he is planning against them?  Or will he be able to fix his mind on innocuous subjects and so defeat their powers?  The ending of the film is exciting, and not entirely reassuring.  There may be more where they came from. 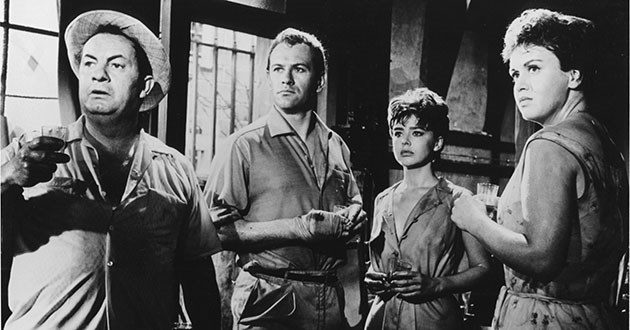 The Day the Earth Caught Fire is much more realistic, and consequently much more plausible.  Indeed, the documentary quality is reinforced by the solid presence of the newsroom and office of the London Daily Express, where much of the action takes place, and by the even more convincing presence of Arthur Christiansen, the actual former editor of that paper, playing the editor.  One can see the amateur actor, but the editor himself conveys an authentic intensity which ranks his performances with the like ones of Harold Russell in The Best Years of Our Lives and Joseph Welch in Anatomy of a Murder.  We are likely to believe what this obviously experienced man of the press has to tell us.

The plot carries conviction too, and could easily be transferred, as one watches it twenty-five years later, into the context of the Greenhouse Effect and global warming.  Sudden floods, unseasonable temperatures, and innumerable other climatic anomalies seem to have turned the world topsy-turvy.  And that is roughly what has happened: two simultaneous atomic explosions set off by the Soviet Union and the United States have tilted the earth on its axis, thrown it out of its normal path, and set it on course for the sun.  The event of the title does not, in the film, happen, though at the end we are awaiting the result of a cooperative blast (the Yanks and the Russkis are working together at last) which is supposed to put the earth back where it belongs.

The principal figures carrying the human drama are a rather beefy and cynical reporter and his girlfriend, who has passed on to him secrets from the Air Ministry which reveal part of the unfolding disaster.  But the most memorable performance in the film is that of the reporter’s superior, the science writer for the Express (an actor this time), who is the prime ferret getting at the root of the matter (reporters moved by highminded considerations may be the only breach of realism in the film!).  This part is played by Leo McKern, an actor known to all through John Mortimer’s television series “Rumpole of the Old Bailey”, but rarely given top billing, despite a career which spans four decades (I had the pleasure of seeing him play Iago in his native Australia in 1949).  In the past forty years he has played a large variety of mostly supporting roles, from Cromwell in A Man For All Seasons (he played the Common Man in the stage production) to Professor Moriarty in a piece of sacrilege called Sherlock Holmes’s Smarter Brother (the other Wilder does this kind of pastiche very much better); a culminating recent performance was in the leading role in Travelling North, a film based on a play by his compatriot David Williamson.

As the end of the world seems to approach, people engage in the kind of activities you would expect them to: drunkenness, sexual license, plunder; there is a general relaxation of law, and people behave rather less inhibitedly than they did in On the Beach a couple of years earlier.  The film The Day the Earth Caught Fire challenges comparison with is certainly not The Towering Inferno, and other such “disaster movie” disasters, but rather Abel Gance’s The End of the World (1931), another film made in a dark moment of man’s history, and the comparison at least on the point of convincing realism is not to the discredit of this afternoon’s film.