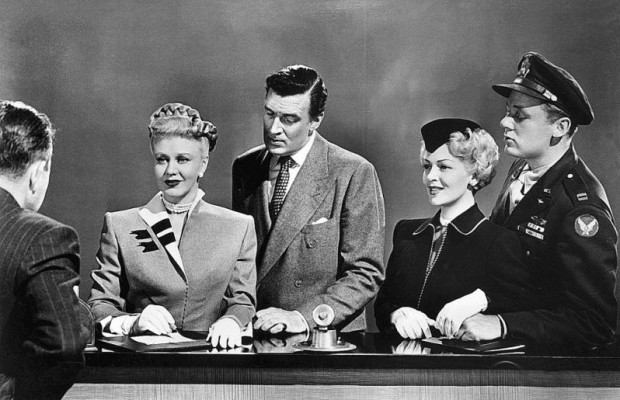 Toronto Film Society presented Week-End at the Waldorf (1945) on Sunday, January 4, 1981 in a double bill with The Stars are Singing as part of the Season 33 Sunday Afternoon Film Buff Series, Programme 5.

“This considerably refurbished variation on Grand Hotel, Vicki Baum’s inspiration for jamming a crowd of picturesque and melodramatic characters together under one roof, may not have reached the classic proportions of its lofty predecessor, but it did bring a lot of pleasure to escapist movie audiences of 1945, not to mention Metro-Goldwyn-Mayer stockholders.

“Lavishly produced, carefully written and directed, and studded with some of the most attractive stars of the period, Week-End at the Waldorf was an extremely powerful box–office entrant in what appeared to be a then-current film cycle dedicated to the glorification of New York landmarks (The Stork Club and Billy Rose’s Diamond Horseshoe had been released earlier in the year).  Not only did Week-End at the Waldorf enjoy a record-breaking nine-week run at Radio City Music Hall but its special look into the inner workings of the world’s most famous hotel had non-New Yorkers flocking to it as well and it was the sixth largest grossing film of 1945.

“A good deal of its success must be attributed to the ingenuity of the screenplay authors, Sam and Bella Spewack, and the film’s adapter, Guy Bolton, in creating a modern American picture plot out of Miss Baum’s European stage drama of 1930 [on Broadway] and of its picturization which followed two years later.  In transforming the Grand Hotel of pre-Hitler Berlin into the Waldorf-Astoria of New York City in the ’40s, only the general pattern of Miss Baum’s original was retained, along with a few reminiscent characters.  Although the story was still episodic, its treatment was light with the accent on glamour.  Accordingly, the film was peopled with a more Hollywood variety, an easy-to-live-with group bearing little evidence of the world-weariness that characterized their 1932 counterparts.  The roles that Greta Garbo, Joan Crawford, John Barrymore, Lionel Barrymore and Wallace Beery first played on the screen [on the Broadway stage, these parts were held by Eugenie Leontovich, Hortense Alden, Henry Hull, Sam Jaffe and Siegfried Rumann] were divertingly recreated by Ginger Rogers, Lana Turner, Walter Pidgeon, Van Johnson and Edward Arnold, but with markedly Americanized, up-to-date alterations.

“Garbo’s bored ballerina Grusinskaya became Miss Rogers’ Irene Malvern, a famous but lonely Hollywood star; her light-fingered lover, the Baron, done earlier by John Barrymore, was transformed into Walter Pidgeon’s Chip Collyer, a debonair news correspondent who, in this version, is merely suspected of being a jewel thief; Miss Crawford’s amoral stenographer, Flaemmchen, became Lana Turner’s Bunny Smith, the luscious Waldorf hotel typist; and the bull-headed Preysing (Wallace Beery in the ’32 film) reappeared in the form of Edward Arnold as Martin X. Edley, the pompous promoter who, like his earlier facsimile, had quite an eye for the ladies.  But it was the pathetic figure of Lionel Barrymore’s aging Kringelein, out for a last fling at life, who underwent Waldorf‘s biggest transformation job.  An apparent bow to the almost obligatory ’40s element of young romance, Kringelein became the boyishly appealing Captain Jimmy Hollis (Van Johnson), a lonely soldier with a fifty-fifty chance of survival from a war injury.

“A number of fresh secondary plots were also introduced in the film, the action of which took place over a period of nearly three days as opposed to the thirty-six hours of Grand Hotel.  The story opens on a Friday, and closes on a Monday morning with much of the action focusing on Irene Malvern, a glamorous film star whose fame and fortune have brought her nothing but loneliness…

“Other guests involved in the hotel’s ceaseless activity were either new script additions or reworkings of old characters.  …Week-End at the Waldorf had, in fact, so many extraneous subplots that one filmed episode involving character actress Constance Collier as Madame Jaleska, an ex-diva doomed to an old folks’ home, wound up on the cutting-room floor.

“In its review, Cue said: ‘…authors Sam and Bella Spewack have whipped together a bright, amusing and elaborately frothy three-corner comedy drama.  Enhanced by a million-dollar production and luxurious Waldorf sets, Week-End at the Waldorf may be no great drama but it is first-rate entertainment.  There’s plenty of color and comedy as the mosaic of life in a great hotel falls into a neat kaleidoscope of lively plot and counterplot, mixing drawing room comedy, a touch of slapstick, and a bit of soulful romance…Most interesting aspect of the picture, and almost as entertaining as the stories, is the astonishing realism of the Waldorf sets, as recreated by MGM’s set designer Cedric Gibbons and staff.’

“Like Garbo and Crawford, their Grand Hotel counterparts, Rogers and Turner never had any scenes together in the 191 pages of Waldorf‘s script.”

The Films of Lana Turner by Lou Valentino, Citadel Press, 1976.