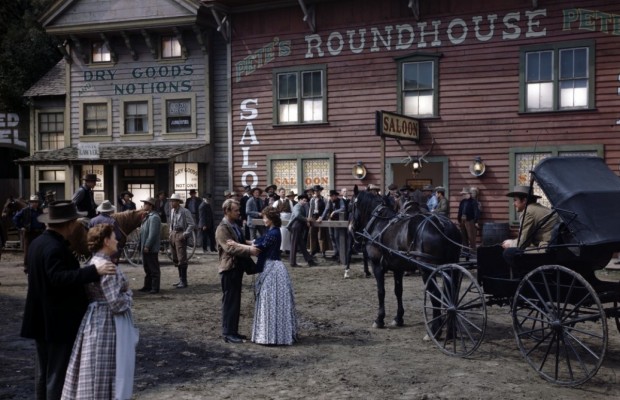 Toronto Film Society presented Whispering Smith (1948) on Monday, March 14, 2016 in a double bill with When the Daltons Rode as part of the Season 68 Monday Evening Film Buff Series, Programme 6.

This picture was Alan Ladd’s first colour film and his first starring western.  Something of a horseman, with a stable of horses on his ranch, he was looking forward to freshening his image by moving west.

Spearman’s novel, Whispering Smith, concerned a real-life figure of legend, a railroad detective who earned the nickname of “Whispering Smith” because he was fast on the draw and spoke in a low, hard voice.  The real Smith was, apparently, neither hero nor heel, although some historians felt he was perhaps more the latter than the legend allows.  Smith was, in fact, exactly the sort of ambiguous character Ladd played so well.

There had been a silent version of Whispering Smith, produced by Signal Films and starring J.P. McGowan as Smith, with Helen Holmes as Marian Sinclair.  In 1936 George O’Brien did a film called Whispering Smith Speaks, but it had little to do with the original character.

There is something uncanny in the way this 1947 film presaged the production of Shane, 1953.  The Shane qualities are more than suggested in the Smith character.  The film presages Shane visually as well.  From the opening shot the titles roll over a panorama of majestic hills rimmed by snow-covered mountains.  Far to the top right of the screen is a figure on a horse, riding closer.  The music swells, the scenery is breathtaking.  As the music fades and the credits cease rolling, we see a gun drawing a bead on the lone rider.  There are other similarities.  The unavailable woman in both films have the same name: Marian.  And Smith’s gentle way with children, his loyalty to a friend, his need to hide his emotions and do what must be done–all bear comparison to Shane.

The Screen Writers Guild nominated Whispering Smith for their award as Best Written American Western of the year.  Ladd looks great in colour and his many fans were enthusiastic about his journey into the West.  It all proved that he was at home on the range.