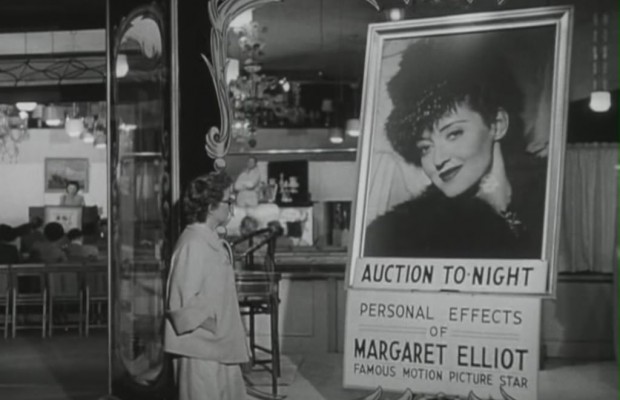 Bette Davis plays the role of an actress named Margaret Elliott, a once great screen star reduced to nothing but her belief in her own status as a star.

This film was a tough and relentless indictment of Hollywood of the time.  However, like Bombshell, it was far too “inside” to get much appreciation from audiences.  The Star was a film that was shot cheaply, in twenty-four days, but one of its chief merits was that it gave a seedy, authentically grim view of Hollywood in the 1950’s.

Even though the spotlight is on Miss Davis, there are some interesting performances in the supporting roles.  Sterling Hayden, in the role of the man who comes to her aid, plays a former actor who was once Miss Davis’ co-star.  He has given up the screen for a life on the sea, and tries to persuade Davis to go with him.  In real life, Mr. Hayden had a great love for the sea and eventually took off for a long tip around the world on his sea-going sail-boat.

Natalie Wood stars as the daughter.  During the shooting, Miss Davis took a great liking to the girl and became good friends.  Natalie Wood was 15 years old at the time, and The Star was already her 19th film.

Although the film did not do that well on its initial release, Miss Davis’ performance was well-received.  In fact, she received an Oscar nomination for her role, but lost out to Shirley Booth in Come Back Little Sheba.  Bette Davis was offered the lead in Come Back Little Sheba, but turned it down in favour of The Star.  Davis later stated that her turn-down of the part was “…one of the really great mistakes of my career.”  The role of Margaret Elliott was offered to Joan Crawford originally, but she turned it down to star in Sudden Fear, for which she also received an Oscar nomination that same year. Such are the coincidences of the film industry…

Although a lot of material has been written about Bette Davis, and much has been said against her, she remained unrivalled as a screen actress.  She broke old molds for female stars in Hollywood.  Unlike women such as Garbo who was glamorous on the the screen, or Janet Gaynor, who, for the most part, wanted to be sympathetic, Miss Davis dived into her work.  She once told a reporter that one of the reasons she works so hard was because, “…there were so few real actresses in film.”  She never disappeared into a role, but shaped her roles to herself.  From this, she received a total of ten Oscar nominations, beaten only by Katherine Hepburn for total nominations.