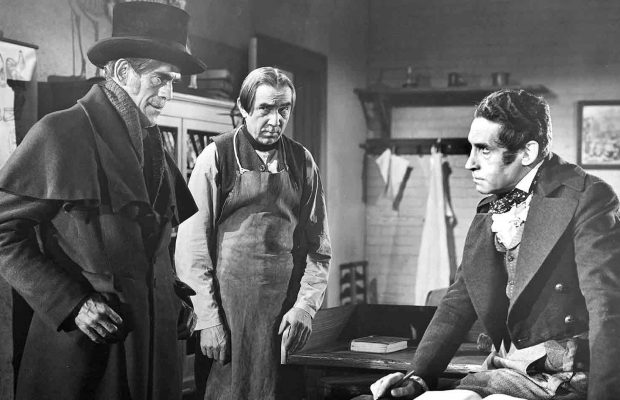 Toronto Film Society presented The Body Snatcher (1945) on Sunday, October 30, 2016 in a double bill with The Thing from Another World as part of the Season 69 Sunday Afternoon Film Buff Series, Programme 2.

The 1881 short story by Robert Louis Stevenson was considered so gruesome a subject matter that it wasn’t published until 1884.  There are almost always changes made between a novel and screen version and in this rendition, the relationship between Dr. MacFarlane and Donald Fettes who, in the story had at one time in their youth been studying medicine together, become mentor and pupil in the film.

With Karloff secured in the role as John Gray, producer Val Lewton thought it would be a good idea to find a supporting role for Bela Lugosi so that the movie could be advertised as another pairing of these two legendary actors which also turned out to be their last.  Both were suffering from different afflictions at the time.  Karloff was suffering from terrible back problems and Lugosi was addicted to morphine but in the blackmailing scene, one of the most powerful and well-acted moments in the film, you would never guess that they were both going through such a tough time.

Although tonight’s film is part of a series of nine horror films directed by three of the best, protégés Robert Wise and Mark Robson, and classic director Jacques Tourneur, all were produced by Val Lewton, one of the few producers whose name is synonymous and inclusive of a series of films.  Born in Russia on May 7, 1904, Lewton came to the US with his mother Nina after she left Val’s gambling and womanizing father.  Later she became the head of MGM’s story department in New York.  Meanwhile, Val grew up with his mother and famous aunt, the actress Nazimova.  As a writer, Lewton did it all—reporting for New York newspapers with topics ranging from the cosmetic industry to stigmata, penning a 1923 book of verse, producing nine novels including one in 1932, No Bed of Her Own which became the 1933 film No Man of Her Own the only film starring future husband and wife Clark Gable and Carole Lombard, cranking out radio scripts and magazine features, engaging in PR work, and even dabbling in pornography.  He married his high school sweetheart Ruth Knapp at the age of 24, had two children, and fit a lot of living into his life when he suddenly died of a heart attack at the rather young age of 47.

Source material: The Pleasure and Pain of Cult Horror Films: An Historical Survey (2009) by Barlomiej Paszylk; Thirteen Horror Films from the Genre’s Gold Age: Hollywood Cauldron (1994) and Bela Lugosi and Boris Karloff: The Expanded Story of a Haunting Collaboration (2009) by Gregory William Mank.

The film is about doctors in Edinburgh: Henry Daniell and Russell Wade, who teaches anatomy. They purchase bodies for classes from a grave robber, played by Boris Karloff. Bela Lugosi plays a blackmailing lab assistant to Daniell’s doctor character. Stevenson’s story and the film are loosely based on true events that took place in Edinburgh, Scotland from November 1827 to November 1828. William Burke and William Hare murdered 16 people and sold their bodies to Doctor Robert Knox, an anatomist at the Royal College of Surgeons in Edinburgh. Burke and Hare were eventually caught and Hare turned King’s Evidence to secure immunity from prosecution. Burke was hanged at 8:15 a.m. on January 28, 1829. French author Marcel Schwob wrote about them in his book Imaginary Lives (1898). Contemporary, Edinburgh-based author Elizabeth Byrd used the events in her novels Rest Without Peace (1974) and The Search for Maggie Hare (1976).

Director Robert Wise is now considered one of the finest American film directors. His career started at RKO in 1934 as a sound and music editor and moved into editing content. It was ten years later that he directed his first feature, The Curse of the Cat People.  As well as directing The Body Snatcher and The Curse of the Cat People, he made The Haunting of Audrey Rose. His versatility and talent as a director are evident in the number of genres he worked in. He did the westerns Two Flags West and Blood on the Moon; films-noir Born to Kill, The House on Telegraph Hill, and Captive City; and the musicals West Side Story and The Sound of Music. He also did the war movies Run Silent, Run Deep and The Desert Rats.

He directed Steve McQueen in perhaps his finest performance, in The Sand Pebbles (1966); the film was nominated for a Best Picture Academy Award. Out of seven Academy Award nominations, Wise won four, as well as two Golden Globe Awards. He was the president of the Directors Guild of America from 1971 to 1975 and the president of the Academy of Motion Picture Arts and Sciences from 1984 through 1987. He received the American Film Institute Life Achievement Award in 1998.

Wise was married to actress Patricia Doyle from 1942 until her death in 1975. They had one son, also named Robert, who is an assistant cameraman. In 1977, he married Millicent Franklin, and they were together until his death. He died of heart failure on September 14, 2005, just four days after his 91st birthday.