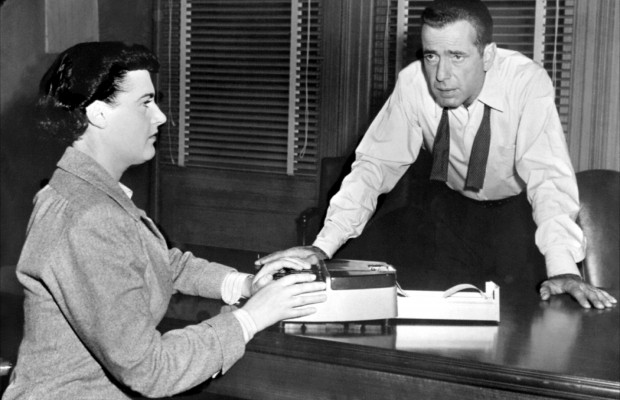 Ed Hutcheson (Bogart) is the editor of the New York ‘Day’ a “crusading paper with a mission”. Finding out that the late owner’s heirs are selling out to their rival a strictly commercial tabloid Hutcheson is at first relieved, feeling that his pending unemployment will give him time to win back the affections of his estranged wife Nora (Hunter).  This plan is turned upside down when a reporter friend of Hutcheson is badly beaten while pursuing a lead against the gangster Tomas Rienzi (Gabel).  Acting the crusading friend, Hutcheson vow’s to take down Rienzi, hoping to tie him to a woman’s murder in the last three issues before the paper is sold.

Deadline – U.S.A. was originally titled ‘The Newspaper Story’.  In order to increase the feeling of authenticity the actual shooting of the film took place in the newsroom and the printing planet of The New York Daily News, with real members of the press playing themselves.   This was augmented by an almost perfect reproduction of a newsroom on a Hollywood soundstage.  Bogart who wanted to nail his role, decided to hang out for a while, to watch the daily routine at the paper.  As a humorous aside, Bogart admitted to Richard Brooks on the first day of shooting that he had been out drinking a little late the night before and that he had not learned his lines.

Ethel Barrymore was the second of the three Barrymore children destined to form what to this day has become one of Hollywood’s leading dynasty’s. Alongside her older brother Lionel and younger brother John Ethel would go on to perform in many memorable pictures.   Although at the outset Ethel’s acting career didn’t seem as foreordained as at first she planned on becoming a concert pianist.  The acting gene runs strong in the Barrymore’s, however, and so she made her acting debut during the New York City season of 1894.  Her natural talent and striking stage presence almost guaranteed her success and Ethel went on to perform in many great roles such as the Clyde Fitch play “Captain Jinks of the Horse Marines” (1901), which brought her initial American acclaim. Lead roles, such as Nora in Henrik Ibsen’s “A Doll’s House” (1905) and starring in “Alice By the Fire” (also 1905), “Mid-Channel” (1910) and “Trelawney of the Wells” (1911).

Although Ethel’s first love was always going to be the stage, it wasn’t long before she devoted a bit of her considerable talent to the silver screen. She was able to win over audiences from the very first with her appearance in The Nightingale (1914).   Ethel’s early film roles, although steady throughout 1919, still took a back seat to her accomplishments on stage.   As Ethel reached middle age during the 1930s, she was able to transition her roles to reflect this, often portraying elderly mothers, grandmothers, dowager ladies, and spinster aunts.   The consummate actress continued to work steadily throughout the mid-40s and much of the 1950s.   Then, as the mother of Cary Grant in None But the Lonely Heart (1944) she received the Oscar for Best Actress in a supporting role, although asking her she would state that she was not truly satisfied with her effort.  When she passed away in 1959, she was interred near her brothers at Calvary Cemetery in East Los Angeles.