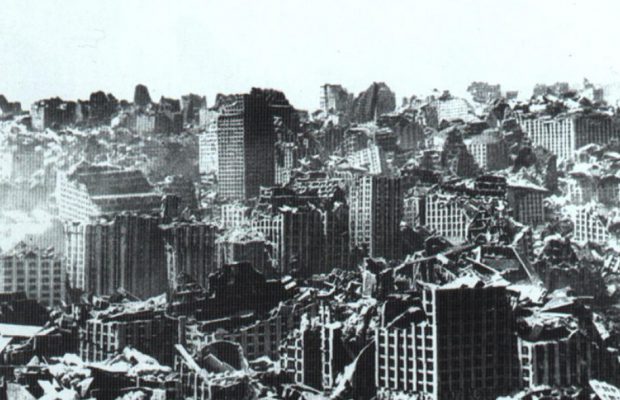 Toronto Film Society presented Deluge (1933) on Monday, January 15, 2018 in a double bill with Back Page as part of the Season 70 Monday Evening Film Buff Series, Programme 4.

The Film Notes you received today tell you the interesting facts about Deluge and its restoration.  What I thought I would talk about is the actress who plays the title role, Peggy Shannon.

Although she had acted in seven shorts and 30 feature films between the years 1930 and 1940, other than the 1939 The Women in an uncredited role, there are no famous films that Shannon played in.  The first time I saw her was at the 2015 Cinefest Film Festival in Syracuse, NY in the 1932 film with Spencer Tracy called The Painted Woman.  A true pre-Code film, Shannon played a showgirl who is treated like the proverbial piece of property by men, and whenever she seems to escape one situation, must ward of rapes and seductions by others.

Later during Cinefest, they screened a second Peggy Shannon film, tonight’s second feature, Back Page where she plays a completely different role.

So who was she and why had the majority of us never heard of her?  In the 1974 book They Had Faces Then by John Springer and Jack Hamilton, they wrote:

“Peggy Shannon was one of the girls (Sylvia Sidney was the other) who were introduced to the screen as replacements for an ailing Clara Bow.  Miss Shannon had the beauty of a Follies girl, which she had been—shapely, with red hair, large brown eyes and a tip-tilted nose.  Unfortunately, her personality and acting ability remained those of a showgirl.  Still she was extremely easy to look at, and as long as she didn’t have to worry about performance, she decorated pictures very prettily indeed.  But she was down to bits by the end of the thirties.”

My first reaction to her in The Painted Woman didn’t leave me thinking she was a lightweight.  I thought she handled her role with intelligence and talent.  And Back Page confirmed it.

She was born Winona Sammon in Pine Bluff, Arkansas on January 10, 1907.  At 16, while she was visiting her aunt in New York, she was hired as a chorus girl by Ziegfeld.  The following year she was cast in the Ziegfeld Follies followed by a role in Earl Carroll’s Vanities.  While on Broadway in 1927, she was spotted by Paramount production head B.P. Schulberg and was offered a contract.  When Clara Bow became ill while shooting The Secret Call in 1931, Shannon was hired to replace her.

Shannon married actor Alan Davis in 1926 with the marriage ending in divorce July 1940.  She then married cameraman Albert Roberts in October 1940 which only lasted until her death just seven months later on May 11, 1941 at the rather young age of 34.  An excessive drinker, which was a big factor to her decline in Hollywood, she died from a heart attack.  Her autopsy revealed that she had a serious liver ailment caused by her alcoholism.  Three weeks after her death, Roberts committed suicide by shooting himself sitting in the same chair at their kitchen table, the exact same place where Shannon had died.  His suicide note read, “I am very much in love with my wife, Peggy Shannon.  In this spot she died, so in reverence to her, you will find me in the same spot.”  It’s rather sad.

Cast in the leading male role is Sidney Blackmer, an actor that mostly played character roles in well over one hundred films before switching over to television in the late 40s.  The famous film that he might be best known for, acting along with fellow contemporaries Ralph Bellamy, Maurice Evans, Patsy Kelly and Elisha Cook Jr., is Roman Polanski’s 1968 Rosemary’s Baby where he played warlock Roman Castevet, husband to Ruth Gordon’s witch.

So besides seeing a newly restored, once thought a lost film, I hope you enjoy becoming acquainted with Peggy Shannon if you already haven’t had the pleasure. 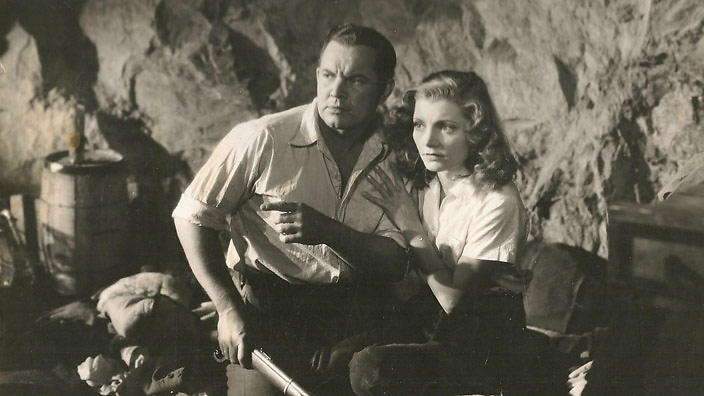 Deluge, the original end-of-the world thriller, is a curious and often fascinating artifact.  Produced in 1933, before the production code came down on Hollywood, on a relatively modest budget, it imagines not just the destruction of civilization in (unexplained) earthquakes and cataclysmic storms but life after the flood, so to speak.  It’s based on a popular 1920s science fiction novel by the now forgotten Sydney Fowler Wright and can claim the title of the first disaster movie.

Scientists are in a panic as barometers plunge and reports of cities flooded in tidal waves and hurricanes are breathlessly reported in radio broadcasts.  In these opening scenes, the only destruction we witness is the lavish house in the woods of Martin and Helen (Sidney Blackmer and Lois Wilson), crushed under trees blown over by high winds.  Then the real spectacle begins: New York collapses in primitive yet evocative miniatures that are more expressionistic than realistic, like an avant-garde short dropped into a science fiction thriller.  Crude travelling mattes put people amidst the destruction, fleeing collapsing buildings or getting crushed by debris, and a magnificent miniature gives us a God’s eye view of New York City swamped by a tsunami.  By modern standards it’s not realistic but it’s mesmerizing in part because it’s a cinematic imagining of something no filmmaker had attempted on screen before.  It’s a first try at the kind of disaster spectacle we now take for granted and these technicians create it all from scratch, not just the technical matter of the physical special effects but the very visualization of the end of the world.

The rest of the film shifts to survival drama and it is savage.  In the calm of the aftermath months later Claire (Peggy Shannon), a professional swimmer, washes up on an island where a brutish thug (Fred Kohler) lays claim to her and kills the only other man on the island for trying to molest her (it’s not out of any sense of justice, mind you, just outrage for pawing his property).  Her escape leads her to Martin, now separated from his family, and the brute follows.  Unlike the familiar disaster movie formula, there’s no more spectacular destruction, but what we get is just as interesting in its own way.  Deluge is pre-code and made outside the studio system, which gives the creators a little more freedom to imagine life after the fall in terms a studio would resist.  There’s a marauding gang that preys upon survivors and rapes and murders women (not shown on screen but the implications are clear) and a community of survivors trying to rebuild from the rubble of a ruined town and re-establish society, which means putting aside traditional ideas of marriage.  Peggy Shannon is paraded about in swimsuits that anticipate the bikini and shows more skin than almost any lingerie scene in the sexiest pre-code films.  None of this would have survived the censors just a year later.  Just to cover themselves, however, the filmmakers cite the Bible the opening credits to reassure audiences that this is fiction that could never actually happen in real life: “We the producers present it now purely for your enjoyment, remembering full well God’s covenant with Noah.”

This was the directorial debut of Felix E. Feist, who went on to a career that spanned specialty shorts (Crime Does Not Pay), B-movies, a couple of star vehicles: Tomorrow Is Another Day (1951) and This Woman Is Dangerous (1952); lots of TV work, and directed a couple of cult movies: the lean, hard-edged film noir The Devil Thumbs a Ride (1947) another film that acknowledges the savage side of human behavior; and Donovan’s Brain (1953), a science fiction drama with a cold-blooded dimension.  Feist makes effective use of striking locations to give the film the feeling of a world out of time and the production a scope bigger than its budget would suggest.  The human drama is a little more awkward, sustained largely by Peggy Shannon’s confidence and strength—this is a woman who doesn’t wait for men to come along and save her—and by the atmosphere of a truly savage world where Darwinian brute force rules until the rest of the survivors can get their collective act together.  At times the dialogue is arch and the performances tentative, in other moments it can feel unstable and unpredictable, a portrait of a world where we can’t assume a happy ending.  That’s no small thing.

Once thought a lost film and for decades only available in an Italian language print with English subtitles, Deluge was recently restored from a newly-discovered 35mm nitrate negative with an English language soundtrack by Serge Bromberg’s Paris-based Lobster Films.