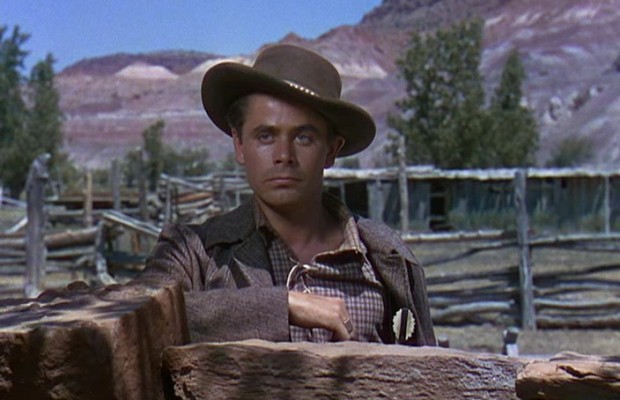 It took nine years after the introduction of full color Technicolor film before semi-poverty row studio Columbia Pictures got around to making their first Technicolor movie.  That movie

was The Desperadoes and it could have been just another typical oater under candy-coloured western skies but someone at Columbia had the sense to throw in a few more goodies, like an interesting and intriguing script, a director with an excellent sense of pace, a rising star and a cast of great character actors.  The result was one of the best Westerns made in the time between John Ford’s Stagecoach (1939) and that director’s return to the genre in the late 1940s.

Charles Vidor was the director of The Desperadoes.  The Hungarian film helmsman, born Karoly Vidor and no relation to that other famous filmmaker King Vidor, is now best known for musicals like Cover Girl (1944) and Love Me or Leave Me (1955) but here he shows a talent for the American Western, creating a lively, action-filled spectacle.  Meanwhile, Robert Carson’s script introduces a complex plot unusual in the genre for its time with morally ambiguous characters–a sheriff with a checkered past, an outlaw who wants to go straight and an upstanding citizen who is actually the mastermind behind a bank robbery.

Another strange touch in the script, different from the norm, is a strong accent on humor in the action scenes.  More even than the humorous satire Destry Rides Again (1939), there are

a lot of laughs during action scenes, particularly in a barroom brawl while a table of gamblers in the middle of it all try to keep playing even as they lose members to flying bottles.

The actors are game as well.  Randolph Scott is the nominal hero but, even as sheriff, he seems ineffectual next to second-billed youngster Glenn Ford playing the outlaw-turned-good-guy Cheyenne.  Ford was then an up-and-coming contract player at Columbia and he dominates this movie.  Director Vidor must have been impressed as three years later he gave Ford the male lead in the star-making Gilda (1946).  Evelyn Keyes is the love interest although Claire Trevor makes much more of an impression as “The Countess.”  Dressed in Technicolor finery, she underlines all the dropped hints about her character that Hollywood’s Breen Offic was trying to keep from the public.

trying to protect his virginal daughter while hiding his own crimes. It’s a fascinating portrayal that tempers his character’s villainy with sympathy and pity.

The Desperadoes is full of great moments and lively performances, far more than a movie that could have just been the announcement that Columbia now had color, too.  The studio took the trouble to deliver an “A” picture despite its “B” classification and its stature deserves to be elevated to that of the other great westerns of the forties.