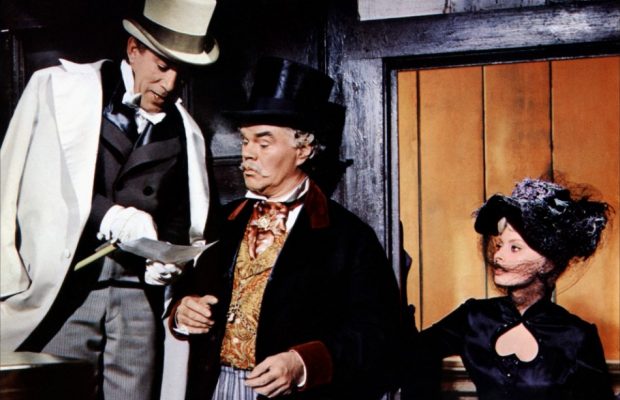 I have never been a fan of Margaret O’Brien but it was interesting to read about her role in tonight’s second feature in Allan R. Ellenberger’s book Margaret O’Brien: A Career Chronicle and Biography.

George Cukor was one of her favourite directors and he used her as a technical expert on certain scenes.  In the one where she’s having an altercation with her mother, played by Eileen Heckart, she told Cukor, “When I’m having a row with my mother, I break off to smile very sweetly at anyone who passes, then go back to the row.”  This impressed the director, who knew that of his principal actors, and despite her youth, Margaret had the most years as a star before the camera.

The only actors in the film who had more experience were Edmund Lowe and Ramon Novarro, star of the silent Ben-Hur.

One particular feature of the alluring Sophia Loren that Margaret coveted was her doe-like eyes.  One day she had her make-up man pull her eyes up with her hair and secure it underneath the wig.  When Sophia saw Margaret’s new look, she was not pleased and remarked, “Your eyes are up”. “The eyes come down.”

Paramount utilized its famed Western Street and also built a frontier theatre complete with balcony, box seats, gaslights and stage.  Location filming sites included Bronson Canyon in Griffith Park and Tucson, Arizona.  When filming on location in the mountains where it was quite cold, Margaret was the only one of the cast not affected by the biting wind.  Actually enjoying frigid temperatures, Cukor had to call for her face to have more grey put in it and her hair to look mussed.  He needed her to “look” cold whether she felt it or not.

Because Heller in Pink Tights was not the typical western, Paramount did not know what to do with it once filming was completed.  They edited the film to fit their mold instead of using Cukor’s vision.  Cukor called the cuts idiotic but knew he did not have control and had to accept it because there was nothing he could do about it.

Interestingly, the role of the gunslinger played by Steve Forrest, was, apparently, originally intended for Alan Ladd.

It will be interesting to see Margaret O’Brien in a film all grown up.  Perhaps this experience will make me a fan after all.

The movie was adapted from the western novel Heller With a Gun written by prolific western author Louis L’Amour.  Many of L’Amour’s novels have been adapted to film.  One of the most notable is Hondo (1953) starring John Wayne, Geraldine Page, Ward Bond and Leo Gordon.  Other L’Amour novels adapted to film include Catlow (1971) with Yul Brynner, The Burning Hills (1956) with Tab Hunter and Natalie Wood, Stranger on Horseback (1955) with Joel McCrae, The Man Called Noon (19793) with Richard Crenna and Stephen Boyd, Kid Rodelo (1960) with Don Murray and Janet Leigh, Four Guns to the Border (1954) and Apache Territory (1958) with Rory Calhoun.  Ted Turner produced a number of television films adapted from L’Amour’s novels featuring Tom Selleck and Sam Elliot in starring roles.

Heller in Pink Tights was not a commercial success but is considered to be George Cukor’s most lavishly visual film.  Cukor hired Russian fashion photographer, illustrator and expert in art and design George Hoyningen-Heune and costume designer Edith Head to create a look not usually found in western films.  Cukor had Sophia Loren lose 20 pounds and wear a blonde wig for her role as Angela Rossini the lead actress in Anthony Quinn’s troupe of travelling actors.

While Heller in Pink Tights is a visually impressive film it is still a western with all the usual plot contrivances; gunslingers, dancehall girls, poker games, Indian, revenge, chases and gunfights.  In this film, Steve Forrest plays the mysterious gunfighter and gambler Clint Mabry.

Steve Forrest was an American actor and younger brother of actor Dana Andrews.  Forrest had a strong career in film and television.  He joined the US Army during WWII at age 18 and fought in the Battle of the Bulge (December 1944 – January 1945).  In 1950 he earned a Bachelor’s Degree with honours in theatre and psychology.  He was working as a theatre stage hand at the La Jolla Playhouse in San Diego where he was discovered by Gregory Peck.  Peck cast him in a play and that led to a screen test and contract with MGM.

He appeared in a number a number of uncredited roles and minor roles until his breakthrough role in the Robert Wise directed film So Big (1953) starring Sterling Hayden and Jane Wyman.  He won the Razzie Award in 1981 for his role in the Joan Crawford bio Mommy Dearest.

Forrest went on to play many strong roles in film and television.  On television, he has the distinction of being the only man to outdraw sheriff Matt Dillon (James Arness) on the TV show Gunsmoke.  He guest starred on most of the television westerns during the height of their popularity in the 1950’s and 60’s.  He was Elvis Presley’s half-brother in the western Flaming Star (1960).  Veteran actors John McIntire and Dolores Del Rio played their parents and a young Barbara Eden was the love interest.

Forrest had his own television show S.W.A.T. (1975-1976).  He played Hondo Harrelson, head of a Special Weapons and Tactics police unit.  In the 1986-1987 season of the television show Dallas, Forrest appeared as ranch foreman Wes Parmalee.  He also had a cameo appearance in the 2003 films S.W.A.T., starring Colin Farrell and Samuel L. Jackson.

In his personal life, he was an accomplished golfer and played in many charity tournaments.  He was married for 65 years to his wife Christine Carilas and they have three children.  He died in May 2013 from undisclosed causes.