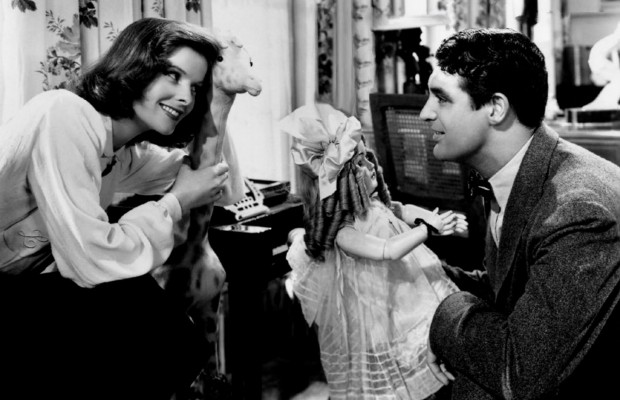 More coolly violent was the unending duel between Warner Brothers’ Sylvester and Tweety, whose passive but nonetheless murderous innocence is like a reincarnation of Harry Langdon’s–but Harry reborn into a faster, harder, big-city world…  The Aesop Fable atmosphere [of Disney] is ousted by a raging Machiavellianism, in which Tweety’s innocence became a weapon.  Sentimental Grandma is still a devastating enemy of Sylvester’s schemes, but seems to have little more idea of the true ferocity of the combat raging about her than Mr. Magoo.  These films lyricize a world of cat-eat-mouse (and vice versa) and the innocent forces of good exist, as it were, exterior to the conflict.  Not that the cartoons are ‘immoral’: almost invariably, the bully or the aggressor is defeated by the more peace-loving animal, except that the ‘cool’ defeat the ‘angry’ and the ‘suckers’.  Still, the cartoons function as a method of attack against the over-simple pieties characteristic of small-town morality.  They’re anti-fairy-tales…(Raymond Durgnat’s World of Comedy – “Life’s a Drag, Isn’t It?”, Films and Filming, January 1966.)

In Gift Wrapped, Friz Freleng and his cohorts demolish Christmas, tearing into that most-cherished of institutions with relentless satire.  This is a vintage Warner Brothers cartoon, made in the period when the style had developed out of the traditional cartoon into something absolutely personal and unique, ruthlessly sophisticated and devilishly funny.  (Just re-issued in May of this year: art theatres please take note.)

Oliver Norvelle Hardy, a would-be lawyer, born in Atlanta, Georgia, in 1892, and Stanley Jefferson, one-time child actor, born in Ulverston, Lancashire, in 1890, became the greatest comedy team of all time because of one day in 1926 when by sheerest accident they appeared together in a Hal Roach short comedy.  “Babe” Hardy had been a singer and, from 1913 on, a movie actor, playing “heavies” and comics and eventually winding up at Roach’s studio.  Stan Laurel had years of experience in English music halls and came to America in the same Karno troupe as Charlie Chaplin in 1913 (he was Chapin’s understudy).  He stayed in the U.S. doing vaudeville and entered the movies as a comedian in 1917, eventually ending up with Roach also.  By the time of that fateful day in 1926, Stan had completely given up acting in favour of directing.  Hardy was appearing as a lead in Stan’s current directorial assignment, but suffered an accident (the scars of which he wore to his death), Stan took over (can you imagine Stan subbing for Ollie!), Ollie returned before shooting was finished, Roach suggested they both stay in the picture and…the rest is history.  They had both had reasonably successful movie careers prior to that time, had even appeared in the same movie together in 1917 (A Lucky Dog) but it was this teaming of their unique comic talents that started their fantastic success story.  What was the secret of their success?  Probably, like all great art, it is indefinable.  It seems to me, though, that they had that magic touchstone that only the very great comedians have–they did not have to do anything funny, they were funny.  They could simply walk into a scene and make you laugh.  Whatever they had came from some deep wellspring of their own characters.  then, too, they had a unique concept of the comedy team–they were not the usual combination of comedian and straight-man–who could say who was the straight-man between these two goofs?  That, I think, is why the numerous two-man comedy teams that tried to follow them never reached their standard–only Jackie Gleason and Art Carney ever approached it.

One of the most notable things about their comedy is perfectly illustrated by The Music Box and that is that, whereas most of the silent comedy greats were destroyed by sound, Laurel & Hardy moved into the sound era without batting an eye.  If anything, they were better with sound.  Their voices turned out to be perfectly matched to their characterizations and they utilized dialogue and sound effects, rather than allowing these techniques to hog-tie their visual gags.  The Music Box, which was Stan’s favourite two-reeler by the way, is virtually a scene-by-scene remake of one of their 1927 silents, Hats Off, and it is the better for sound.  They saw no reason to talk any more than they ever had merely because they could now be overhear and the piano which the Laurel and Hardy Cartage Company is attempting to deliver has a voice of its own!  The Music Box is also typical of their best work in another respect, too.  The story is nothing more nor less than the delivery of a piano and out of that one simple situation is a symphony of gags is created, all revolving around the obstinacy of inanimate objects. 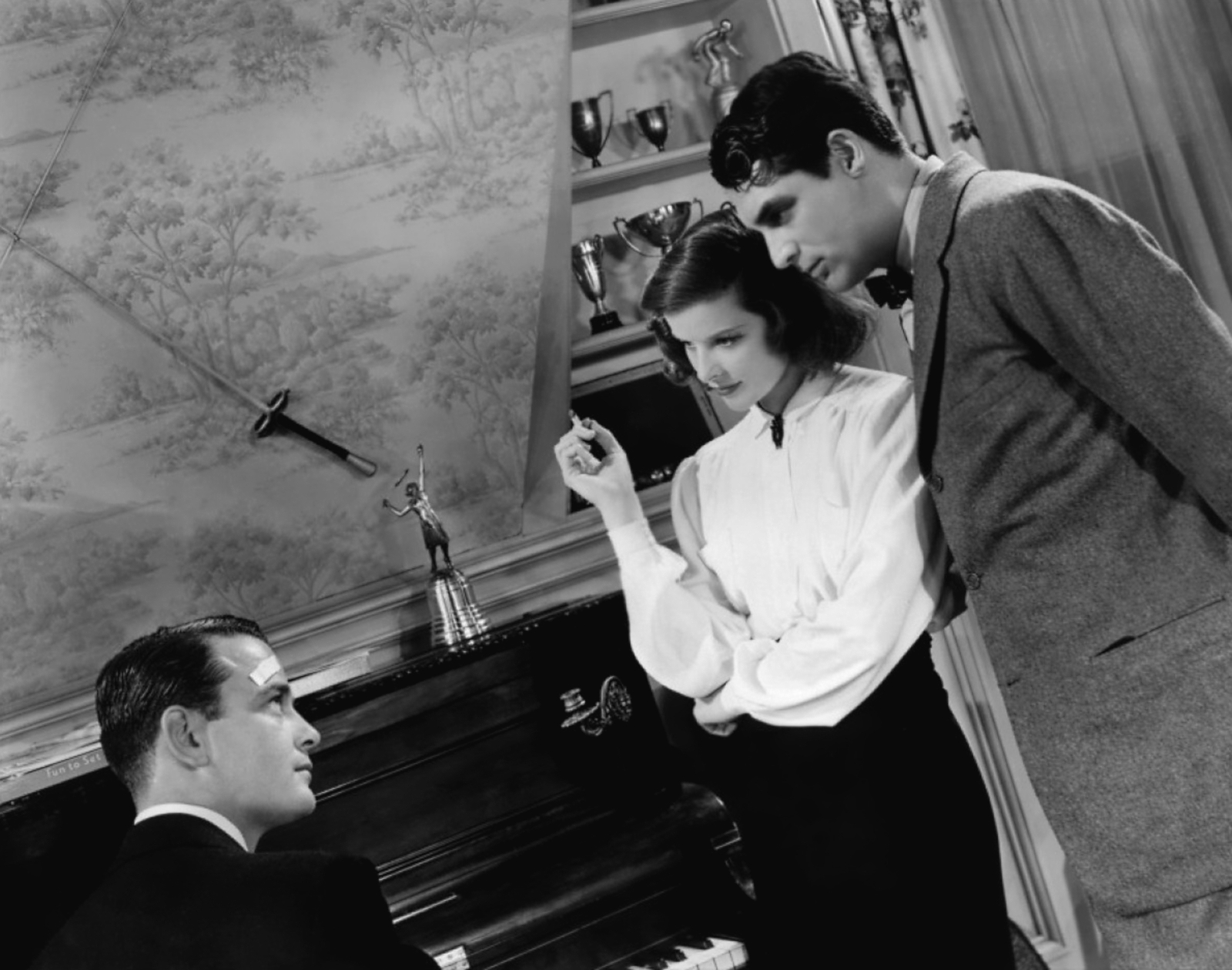 The late Philip Barry was (save for the late S.N. Behrman) America’s most felicitous confector of witty and civilized stage comedies.  His three Broadway hits of the late Twenties and early Thirties–Paris Bound, Holiday and The Animal Kingdom–were all filmed with great success by actress Ann Haring and director Edward H. Griffith.  Remade eight years later in the version we are seeing tonight, Holiday may well be the only remake of a movie success that is as good as or better than the original.  Techniques for expanding stage works for the film medium had improved since 1930 and director George Cukor took skilled advantage of them; also Donald Ogden Stewart, a good friend of Barry’s and no mean play-wit himself (“Rebound”) not only respected and retained the freshness and sparkle of the play but deftly brought it up to date with references to the CIO and the Depression era–as well as dreaming up such bright new scenes as the church sequence.

The lighter-than-air story (with overtones of anti-conformism) concerns a bright young man, slated to marry the conventional daughter of a wealthy family, who shocks all and sundry with the announcement that, rather than work hard now for a pleasurable retirement, he intends to go on a long holiday now, enjoy life “while I’m young and feel good all the time” and work later–shocks all, that is, but his fiancee’s sympathetic, emancipated older sister, who backs him up with glee.  Kate Hepburn never had a more likeable and form-fitting role than this and she makes an enthusiastic meal of it.  Cary Grant, of course, is right in his element as the ingratiating non-conformist, while the oft-wasted Lew Ayres takes sensitive advantage of one of his better opportunities as the sardonic, alcoholic brother.  The cast too is enormously strengthened by the happily astringent presence of Edward Everett Horton and Jean Dixon as ebulliently married middle-aged friends of the hero.

George Cukor had directed Hepburn successfully before in A Bill of Divorcement and Little Women.  Although by 1938 she had bee labelled “box-office poison” in the trade, Holiday went over well enough to inspire its star to buy the film rights to Barry’s later comedy The Philadelphia Story which she sold to M-G-M on the condition that she repeat the role she had played on the stage.  The rest, as they say, is history, with years of profitable Hepburn stardom at M-G-M, often teamed with Spencer Tracy (in Barry’s Without Love among others), often directed by Cukor (in The Philadelphia Story, Keeper of the Flame, Adam’s Rib, Pat and Mike).  Later came memorable performances in The Rainmaker, Suddenly Last Summer, Long Day’s Journey into Night.

George Cukor‘s screen career dates from the early talkies–dialogue director on Milestone’s All Quiet on the Western Front, he was soon making his own films which have included David Copperfield, Camille, Romeo and Juliet, Dinner at Eight, The Women, Susan and God, Born Yesterday, The Marrying Kind, It Should Happen to You, A Star is Born and My Fair Lady.