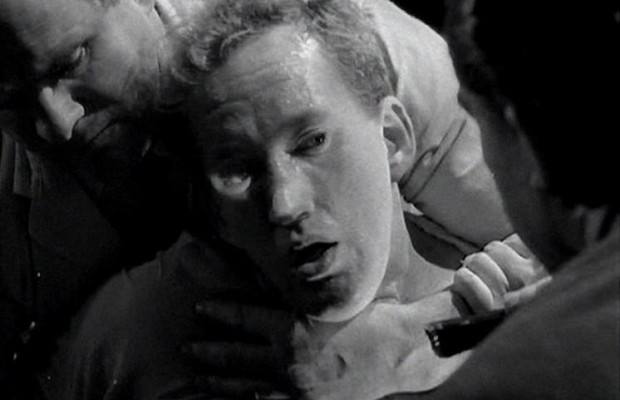 Toronto Film Society presented Night of the Demon (1957) on Monday, October 27, 2014 in a double bill with The Seventh Victim as part of the Season 67 Monday Evening Film Buff Series, Programme 2.

Based on the story “Casting the Runes” by M.R. James, the plot revolves round an American psychologist (Dana Andrews) investigating a satanic cult suspected of more than one murder and hoping to expose the cult leader Julian Karswell as a fraud. Karswell manages to insert into Holden’s papers a parchment that imposes a runic curse on him and summons up a demon to attack him, a tactic that he has successfully employed previously to rid himself of Henry Harrington, another sceptic and colleague of Holden.

Clashing ideas about the treatment of the story between director Tourneur and script writer Bennett on one side, and producer Chester on the other revolved largely around whether or not to show a literal demon, an argument won by Chester over the objections of Bennett, Tourneur, and star Dana Andrews. The film was cut from 95 minutes to 83 for American release, re-titled Curse of the Demon, and shown without fanfare as part of an obscure double bill.

Montague Rhodes James, a medievalist and antiquarian scholar, and provost of King’s College, Cambridge and later of Eton College, is widely considered the finest writer of ghost stories in the English language, rivalled perhaps only by Henry James in such works as “The Turn of the Screw”. Although he used contemporary settings rather than the Gothic clichés of his predecessors, his characters and plots tend to reflect his own antiquarian interests, and his stories remain genuinely chilling even today. Collected under Ghost Stories of an Antiquary and similar titles, they usually centre round the discovery of an old book or similar object that attracts or calls down the wrath of a supernatural and malevolent menace, often from beyond the grave. James was an admirer of the 19th Century ghost story writer Sheridan Le Fanu and in turn influenced and was much imitated by H.P. Lovecraft, Ruth Rendell, Stephen King and many others. Several of his stories have been adapted for radio, television and film, with Night of the Demon generally considered to be far the most successful of the films.

Son of the great silent film director Maurice Tourneur, he was born in Paris but moved to the United States at the age of 10 with his father, and began work in film as an editor and assistant director, making his debut as a director  in  a French short film in 1931 before returning to Hollywood in 1934, where he had a contract with MGM and made his first feature, They All Came Out, in 1939 He was then dropped by MGM, but picked up by Val Lewton [see under The Seventh Victim], whom he had met while working as second unit director on A Tale of Two Cities, and directed for Lewton, Cat People, I Walked With a Zombie and The Leopard Man. Promoted to the A-list at RKO, he made Berlin Express, Experiment Perilous, and what is probably the finest of all “films noirs”, Out of the Past, before becoming freelance in the 1950s and directing Great Day In The Morning, Night of the Demon and The Comedy of Terrors (starring Vincent Price), among others. He then worked in television for some years before retiring to France, where he died in 1977

Born Augusta Margaret Diane Fuller in Wales, but of Irish parents, and educated in London. She appeared as a child on the London stage and made her film debut in 1930 at the age of 13. She was brought to Hollywood by Darryl F. Zanuck and made six films there, the best known being the now classic Gun Crazy (1949) directed by Joseph H. Lewis. In 1950 she returned to London to marry and appear in British films such as Meet Mr. Lucifer and Night of the Demon. She made her last film in 1961.

Born Carver Dana Andrews on a farmstead in Mississippi, his family moved to Texas where he attended Sam Houston State University and then, hoping to find work as an actor he moved to California, where he studied theatre and acting at the Pasadena Playhouse, and became an acclaimed member of the company, attracting the attention of Samuel Goldwyn, who offered him a movie contract. His first film role was in The Westerner (1940) and this led to his finest period as an actor in the following decade with Ball of Fire (1941–as a gangster), The Oxbow Incident (1943–as a lynching victim), Laura (1944–as an obsessed detective), The Best Years of Our Life (1946–as an air force veteran) and State Fair (1945–as a singer in a musical in which he starred with Jeanne Craine). His career began to stall in 1950s as a result of his alcoholism, and, after Where the Sidewalk Ends in 1950 he moved more into B-movies, though he had success in Fritz Lang’s While the City Sleeps (1956) and Beyond a Reasonable Doubt (1957) and Jacques Tourneur’s Night of the Demon (1957). His later work was mostly in radio, after he had brought his alcoholism under control, and he died from heart failure in 1992 at the age of 83.  [Notes adapted from previous TFS screenings].

A British actor who appeared in over one hundred films as well as innumerable television and radio programmes, he was described in a Daily Telegraph obituary as “one of the most intelligent, expressive, subtle and versatile actors of his generation; he could add a depth to scenes that was far beyond the reach of the dialogue….Tall, bald, bright-eyed, puckish, pixie-face, gnomish and quizzical, Denham had a remarkably wide range of expression, facial and vocal, which enabled him to convince in all manner of roles.”

“He also” [another critic commented] “had one of the most listenable and controlled of English-speaking voices, a legacy from his many years in radio.”

A British playwright and screenwriter whose play Blackmail was filmed by Alfred Hitchcock n 1929. He worked with Hitchcock later as writer of some of his most famous films, such as The Man Who Knew Too Much (1934), The 39 Steps (1935), Secret Agent (1936), Sabotage (1936), and Young and Innocent (1937). His scripts attracted the attention of Hollywood and he worked with Hitchcock in America on Foreign Correspondent (1940) and also for David O. Selznick and Cecil B. DeMille. He stayed in Hollywood as writer and occasional director for both film and television, with Night of the Demon considered the best of his later work.