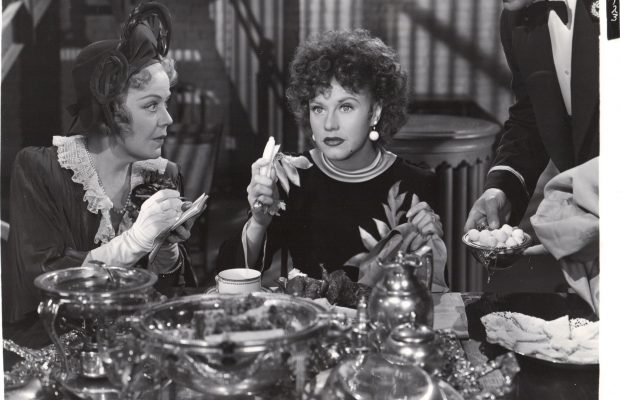 Toronto Film Society presented Roxie Hart (1942) on Sunday, February 10, 1985 in a double bill with The Canary Murder Case as part of the Season 37 Sunday Afternoon Film Buffs Series “A”, Programme 8.

William Wellman (1896-1975) was primarily a director of action pictures, from Wings (1927) through Beau Geste, The Ox-Bow Incident and The Story of G.I. Joe to The Lafayette Escadrille (1958).  His idea of comedy, as W.C. Fields once remarked, “would be watching a parachute fail to open.”  Nonetheless, his direction of the classic screwball comedy Nothing Sacred in 1937 prompted Nunnally Johnson to ask Wellman to direct his scenario from the old play Chicago, which had already been given one screen treatment, under its original title, in 1927, with Phyllis Haver.  Johnson’s distinguished career as a screenwriter had begun fifteen years before Roxie Hart, and would eventually extend over forty years, in which he wrote for such directors as Ford, Hawks, King, Lang (all of whom also emphasised action), as well as producing and directing himself.

Wellman’s direction of Roxie Hart is as fast-paced as any of his action films, and shares with them his overriding interest in the criminal or semi-criminal classes: frauds, parasites, sensation seekers; not so different a set, after all, from the cheats and dupes of Nothing Sacred.  Sifting attitudes towards self-seeking (now known as self-realization) have made the film more popular than it was on its first appearance.  Then that great barometer of middle-class taste, Bosley Crowther, deplored it as “a lot of coarse nonsense,” “a raucous and tasteless travesty”; and even Variety conceded that it would not play well with “audiences in the hinterlands” (scarcely their constituency), though they thought, overlooking ol’ Bos, that “metropolitan patrons should take to it.”  But the word “burlesque,” which both the New York Times and Variety used, correctly identifies the genre, and explains the swiftness and subtlety of the patter.  A line of Adolphe Menjou’s aptly suggests both the level of sophistication and the self-serving ethos of the characters: “When you came in here, I didn’t ask you is she guilty or innocent….I simply said, ‘Have you got $5,000?'”

In truth, the proper genre for this story of a woman who confesses to a murder she did not commit, for the sake of publicity and the profit of a whole set of seedy hangers-on, is screwball comedy, and Wesley Ruggles had done a better job of it five years before in True Confession, with Carole Lombard.  Ginger Rogers can only look girlish when she tries to be comic (a fact Billy Wilder triumphantly capitalized on a year later in The Major and the Minor); her comid talents were certainly not for burlesque, and after the partnership with Astaire, she found her best roles in a series of rather dark films–Kitty Foyle, The Primrose Path, Lady in the Dark.  Roxie Hart finally belongs to the actor who demonstrated for over forty years that he was equally adept at stylish comic roles (A Woman of Paris, The Marriage Circle) and at sinister confidence-man (A Star is Born, State of the Union)–Adolphe Menjou.