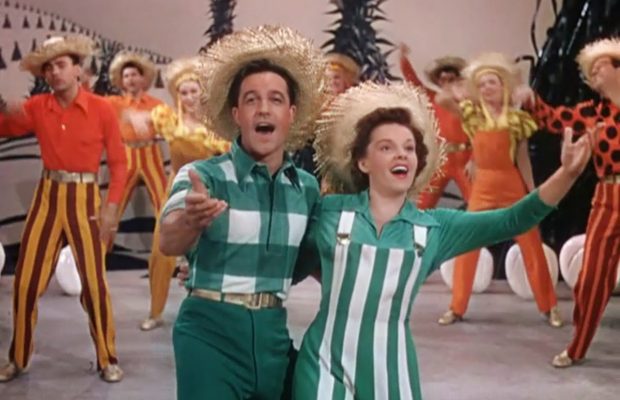 Toronto Film Society presented Summer Stock (1950) on Monday, March 17, 1986 in a double bill with Without Reservations as part of the Season 38 Monday Evening Film Buffs Series “B”, Programme 9.

Waterloo at MGM was inevitable for Judy Garland.  Her growing emotional problems and bouts of ill health had combined to make her an increasingly hazardous risk to any film production.  Shooting The Pirate (1948) had been a near overwhelming trial for the Arthur Freed-MGM unit and Easter Parade (1948) was not much better, but at least the latter project was a financial and artistic success.  Because Garland had enjoyed a harmonious working relationship with Fred Astaire in Easter Parade, it was decided to reteam them in The Barkleys of Broadway (1949), but eventually it was necessary to replace her (with Ginger Rogers) while Judy sought to recuperate.  Then came her fiasco with Annie Get Your Gun (1950).  After she was removed from the musical and replaced by Paramount’s Betty Hutton, Garland was shipped to Peter Brent Brigham Hospital in Boston to undergo amphetamine and barbiturate withdrawal.  It was an extremely painful experience for the frightened actress.  When her health had improved sufficiently she was allowed visits from her director-husband Vincente Minnelli and from their little daughter Liza.  Another visitor was Arthur Freed.  He informed Judy that MGM wanted her back and that a script was awaiting her return.

The vehicle was Summer Stock, to be produced by Joe Pasternak.  At one point, it had been hoped to reunite Mickey Rooney with Garland in the venture, but he had left the lot by the time the musical could get into production.  Then Pasternak turned to Gene Kelly, a Garland favorite who had been with her in For Me and My Gal (1942), The Pirate, and initially Easter Parade (before he broke his ankle and was replaced by Astaire).  Everything was done to provide Garland with a sense of security.  Charles Walters, who had directed her in Easter Parade and The Barkleys of Broadway (before she left the cast), was assigned to the project, as was old friend Phil Silvers and such Garland (working) pals as Johnny Green and Saul Chaplin, both involved with the film’s music.  Also in the cast was Marjorie Main, the rambunctious on-screen (but very understanding off-screen) soul who had supported Judy in Meet Me in St. Louis (1944) and The Harvey Girls (1946). 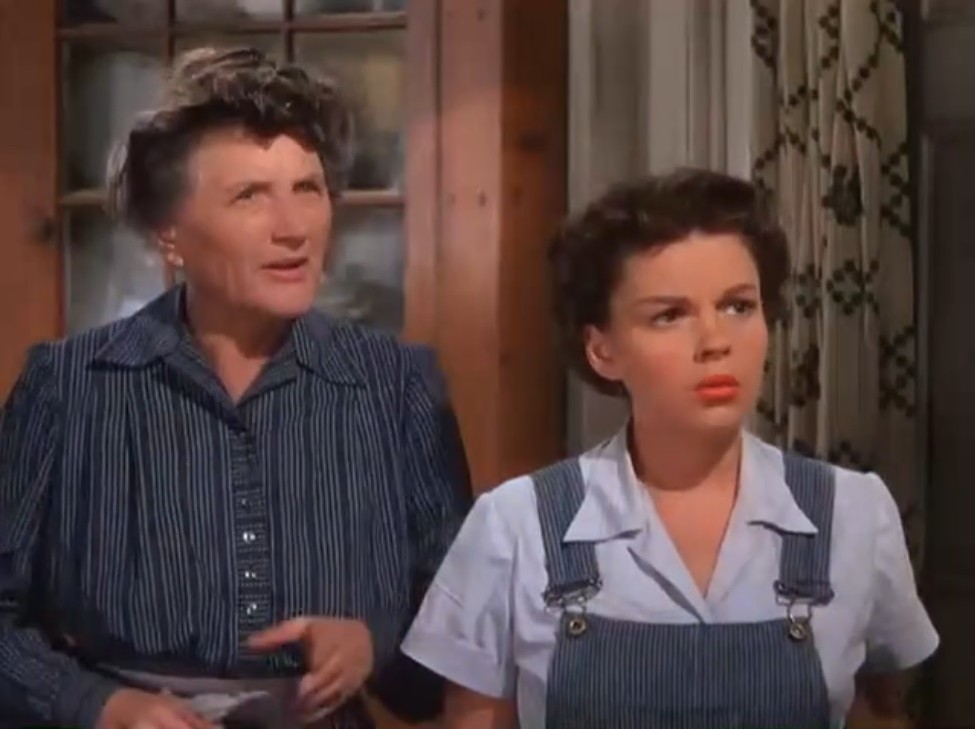 What promised to be a relaxed situation soon deteriorated into chaos.  For starters, MGM insisted that a psychiatrist (one who had dealt with Garland in Boston) be on the set at all times to oversee the star’s mental condition.  The situation embarrassed Judy, who begged to be left alone and not be publicly humiliated.  Adding to her problems was her weight.  She was in obvious need of dieting and when she did so, it led to an increase in the use and dependence on drugs, all of which made her emotionally unstable again.  Soon the unreliable Garland of old was in the fore.  She would report to the studio late, some days not showing up at all.  She required the consultation of Minnelli at any given moment.  When she could bring herself to concentrate on the script and filming, she became depressed.  She had decided that the project was a waste of her talents, that it was merely a continuation of Babes On Broadway (1941) type of movie.  Director Charles Walters later recalled:

God, she was a problem on that picture–her nerves were shot, there was the weight thing, everything.  We never knew what time she’d com in–or whether she was prepared for anything when she did.  She’d come storming in and say, “Looky, buddy.  If you expect any acting out of me today, forget it!”  And I had to sort of josh her out of it, had to pretend that I didn’t care if she worked or not….You always had to keep her spirits high.  Once you had her in the mood for work, you had to keep here there.  Not that it was always easy.  What was the number on the tractor?  Oh, “Howdy Neighbor!”  The days we spent on that!  I can see her sitting on that damn thing mumbling, “What am I doing here?  Please send for Vincente to take me home.”

The film limped to completion and despite all the problems became a big money earner.  Joe Pasternak remarked that when production was completed “we discovered we needed another number.  Judy had lost about fifteen or twenty pounds between the two months before we had finished cutting the picture that everybody thought it was a stock shot.  When we previewed the picture with an audience, they didn’t’ care what she looked like.  They loved her.  I don’t think any actress was as loved by the American people as Judy.”

The Best of M-G-M The Golden Years by J.R. Parish and G. Mank