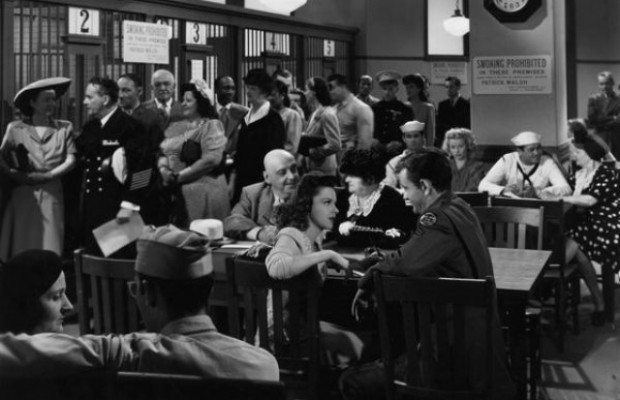 Toronto Film Society presented The Clock (1945) on Monday, July 6, 2015 in a double bill with On The Town as part of the Season 68 Monday Summer Series, Programme 1.

Its wartime and young people are rushing into hasty – sometimes unwise marriages, but not pretty, level-headed Alice. Then she meets Joe, a G.I. on a two-day pass, and falls heart-over level-head in love. Garland and Walker are sweet hearts for the ages in this glowing valentine of a movie.

A tender and refreshingly simple romantic drama has been woven around a soldier on a forty-eight-hour furlough in Manhattan and his chance meeting with a lonely girl, in the new Metro film, “The Clock,” which opened yesterday at the Capitol. The atmosphere of the big town has seldom been conveyed more realistically upon the screen than in this picture. Much of the background footage actually was made here, and the director, Vincente Minnelli, has recorded the pulse beats of Manhattan—the roaring elevators, the screeching police sirens, the basso whistling of big boats in the Hudson, the crashing of garbage cans on the midnight pavements and all the other voices of cosmopolitan life—with electrifying effect. The sound track of this film is a composition in itself, not just a mechanical device.

Robert Walker and Judy Garland, who, by the way, doesn’t sing a note, are the principals. While they make a very likable pair, this corner could not help feeling that Mr. Walker, the lad from Indiana on a final leave before shipping for England, plays the country bumpkin with an overabundance of juvenile bewilderment. But the chances arc this is a reaction few of the Capitol’s feminine patrons will experience. Though the boy and girl are the objects of attention, several equally arresting characters pass by from time to time. For instance, there is the soap-box type drunk in an all-night beanery, who is played to perfection by Keenan Wynn, and then there is the affectionate milkman interpreted unerringly by James Gleason. – N.Y. Times