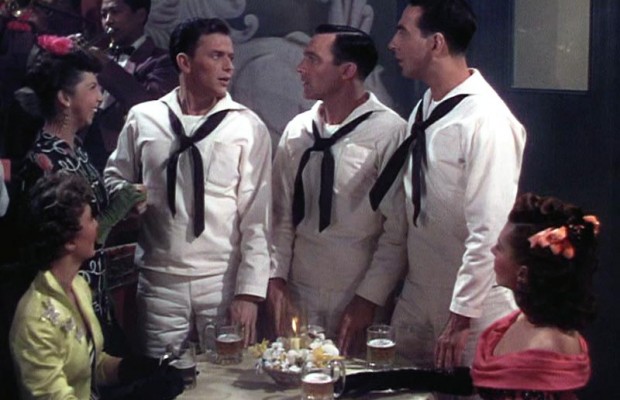 Toronto Film Society presented On The Town (1949) on Monday, July 6, 2015 in a double bill with The Clock as part of the Season 68 Monday Summer Series, Programme 1.

On the Town changed the landscape of movie musicals, opening the filmmakers’ eyes to what could be done on location. When brilliant location and studio production are blended it could be – as here – ebullient up – and at – ‘em perfection.

Three sailors have 24 hours to take in the sights and sounds of N.Y.C. Exuberant MGM musical, innovatively shot on location all over the City, isn’t much in terms of plot and discards some of the best songs from the Betty Comden Adolph Green Leonard Bernstein show on which it’s based . . . but it’s still terrific entertainment. Highlight: “New York, New York.” Oscar winner for Roger Edens and Lennie Hayton’s musical scoring. An impressive directing debut for Kelly and Donen. – Leonard Maltin

The Music Hall pulled the wrappings off its Christmas show yesterday and revealed a delightful entertainment for all ages, sexes and seasonal moods. It is Metro’s crackling screen version of the musical, “On the Town,” and a more appropriate all-purpose Yuletide picture would be hard to fashion or find. Gaiety, rhythm, humor and a good, wholesome dash of light romance have been artfully blended together in this bright Technicolored comedy. The holidays should be nicer for having “On the Town” around.

From the moment the picture opens, in the actual Brooklyn Navy Yard, with the three sailors cutting off for New York, the whole thing precipitately moves, with song, dance, comedy and romance ingeniously interwoven and performed. With Mr. Kelly playing the role of the principal tar, the excellence of the masculine dancing is immediately guaranteed. And with Vera-Ellen playing the little Manhattanite whom he meets—Miss Turnstile, the Subway Cinderella—his vis-a-vis is assured. – N.Y. Times