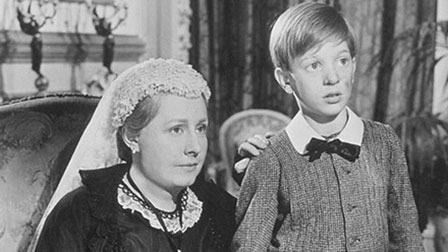 Toronto Film Society presented The Mudlark (1950) on Sunday, November 8, 2015 in a double bill with Vacation From Marriage [aka Perfect Strangers] as part of the Season 68 Sunday Afternoon Film Buff Series, Programme 2.

Toronto Film Society presented The Mudlark (1950) on Monday, February 12, 1979 in a double bill with Forever and a Day as part of the Season 31 Monday Evening Film Buff Series, Programme 6.

Mudlarks were small boys who scraped a living from the shores of the Thames River before it was embanked.  Theodore Bonnett wrote the story of one such mudlark, who one day finds a cameo of Queen Victoria.  An orphan, he feels that she looks so much like a mother that he decides to pay her a visit, little realizing that she is very hard to see, having sequestered herself in Windsor Castle since the death of the Prince Consort, Albert.  He becomes the innocent pivot of a palace turmoil, a cause célèbre in a violent debate in Parliament, and the eventual agent to touch the heart of the Queen.

In the title role, Andrew Ray touchingly expresses the amazement and confusion of a humble guttersnipe caught in the stiff and ponderous meshes of an unsuspected trap.  He has a perfect face and an attractive personality.  In his small voice he chirps the shocking candour and independence of a cockney toff.

Irene Dunne does as well as she can with her portrayal of Queen Victoria but the character has been approached with such awe and veneration that too little personality, illusion, or real emotion is conveyed.

Alec Guinness as Disraeli gives a brilliant performance, endowing the famous statesman with great shrewdness and eloquence.  His rhythmic and clever histrionics in one long Parliamentary scene account for one of the film’s best parts and a speech that’s an actor’s dream.

The story (not based on fact), with its particular blend of whimsy, pathos and fairy tale has been skilfully and imaginatively turned into a warm and rewarding film.