Toronto Film Society presented The Royal Family of Broadway (1930) on Sunday, October 14, 1984 in a double bill with Rasputin And the Empress as part of the Season 37 Sunday Afternoon Film Buffs Series “B”, Programme 3.

On December 29, 1927 a delightful parody based on America’s leading stage family, the Barrymores, and appropriately titled The Royal Family, opened on Broadway, with Otto Druger in the role Fredric March was later to play on the road, in Los Angeles, and in the film based on the play.  The authors of the hit play were George Kaufman and Edna Ferber and their collaboration produced, among others, two further significant plays that would later be made into superb movies, Dinner at Eight (1932) and Stage Door (1936).  When The Royal Family was made into a movie, additional words were added to the title so that people would not think it was a story about the British monarchy!

George Cukor co-directed the picture with Cyril Gardner, with Cukor staging the scenes and Gardner shooting them.  Despite efforts to make the hit play less stagebound and despite Edward Dmytryck’s fine editing, the film was not a success; although it was an early “talkie” the film’s technique was still a bit primitive.  Cukor has stated that the smell of greasepaint isn’t real–it’s plastic.  But it represented what people at the time liked to believe about the theatre.  Possibly it was too specialized, and the satire on both the theatre and the “talkies” which punctuated the literate dialogue was perhaps too sophisticated for the mass audience to appreciate.  When Fanny Cavendish (Henrietta Crosman), the matriarch of the clan, refers condescendingly to the movies as “all singing, all dancing, all terrible,” the line may well have offended the Depression-ridden moviegoing public across the country for whom the “talkies” were a source of solace. 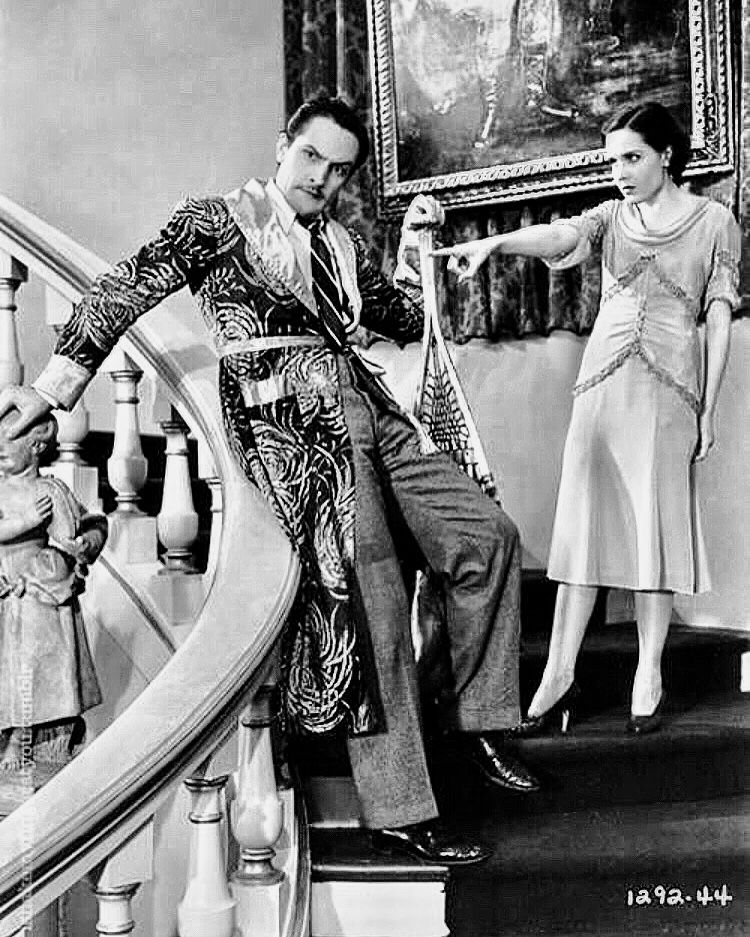 Paramount bought the film rights for Fredric March and he gives a brilliant performance as a thinly-disguised caricature of John Barrymore, with the lovely Ina Claire in an Ethel Barrymore-type role as a theatrical “First Lady.”  (When the play was first written, Ethel Barrymore asked George Kaufman if she might have a look at it.  After doing so she went directly to her lawyer, who studied the play carefully and informed Miss Barrymore that of the three–Ethel, John and Lionel–only John had the possibility of a case, of libel.  He couldn’t be bothered and thereafter Ethel was very cool to George Kaufman when they met at parties.  In fact, when originally casting the play, the part of Julia Cavendish was offered to Ethel who turned it down flat and threatened to sue.)

Fredric March received his first Academy Award nomination for his bravura performance and had the critics raving, and using such adjectives as “preposterous, glamorous, lunatic, tremendously vital, spirited, boisterous”, etc.  He has Barrymore down to a T–every lifted eyebrow, every gesture, every fey mannerism.  Although he played the role of Tony Cavendish on stage and screen, and much later on television, it is not among his favourite roles, reportedly because he regards it, for all its cleverness and virtuosity, as, basically, a spoofing lampoon of another personality, rather than a full-fledged interpretation of a character rooted in his own mystique.  If so, he underrates himself for it is a fine combination of inventive comedy and clever parody, a synthesis which, as any actor will admit, is not easy to get across.

Ina Claire, Henrietta Crosman, Mary Brian, Frank Conroy and other cast members are likewise excellent, with Miss Claire shining to a greater extent than her film stories usually permitted–which was the screen’s lose, not hers.  The story is a zany and wild and spontaneous as the keen wit of George Kaufman and Edna Ferber, as filtered through understanding screen adaptors Herman Mankiewicz and Gertrude Purcell, could make it.

A review at the time by Thornton Delehanty in the New York Post stated: “If (the film) had been shown to an audience in the mountains of Tennessee, they could hardly have failed to recognize any less quickly or forcibly than did last night’s audience gathering at the Rivoli just which of Broadway’s families was referred to in the title.  For, in addition to the many clues offered by the situations and dialogue, it only needed Fredric March’s sterling impersonation of America’s leading actor, an impersonation that was complete to the last detail of makeup and gesture, to settle the question beyond all doubt…not of course that any obscurity was intended.”