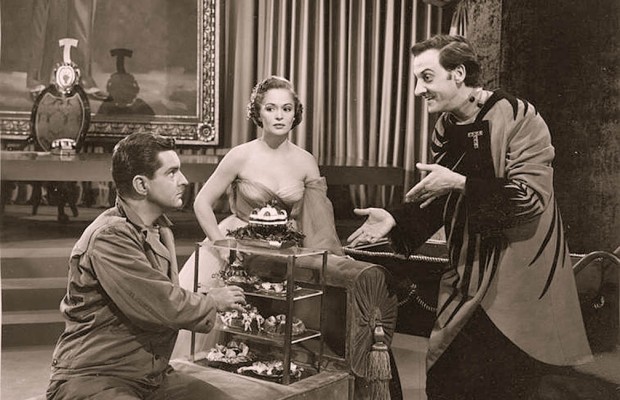 Toronto Film Society presented The 5,000 Fingers of Dr. T (1953) on Monday, December 3, 1973 in a double bill with The Dark Corner as part of the Season 26 Monday Evening Film Buff Series, Programme 2.

The really artistically successful, sophisticated fantasy (and in the case of The 5,000 Fingers of Dr. T a comedic one) is a rarity in the cinema, especially in America, so the relative neglect afforded tonight’s second feature has always seemed quite unjust.  Certainly several stalwarts of the T.F.S. programming committee, though they usually never agree on anything else, at least share a great enthusiasm for this deliciously delightful film, and we are pleased to finally include it in one of our series.

Unfortunately the initial critical and public reception was, in a word, disastrous, and Hans Conried tells us “it was comparable only to Wilson as one of the great money-losers of all time; it would stop conversation for some years thereafter at any Hollywood social gathering”.  However, most foreign critics thought otherwise and the film has gradually garnered its champions, including Raymond Durgnat.

There’s little need to hunt the “auteur” of this film.  It’s certainly not Kramer (no heavy social themes here, thank heavens), nor Rowland.  In fact one would be hard pressed to find any other modern film where original story, screenplay, lyrics, set design and costumes are the initial work of one man, Dr. Seuss.  Theodor Seuss Geisel began his career with the “Quick, Henry, the Flit” cartoons and his since become famous for his many wonderful children’s books (“The 500 Hats of Bartholomew Cubbins”, “Horton Hatches An Egg”, “How The Grinch Stole Christmas”, etc.),

The film abounds in extravagantly expressionistic sets, with endlessly amusing details: topless sky ladders, split staircases leading nowhere, and the monstrous curving double-tiered piano where Dr. T’s dream concert will take place with 500 boys all playing at once.  “Think of it!  Five thousand fingers!”.  Two sequences in particular are absolute gems: Eugene Loring’s magnificently bizarre ballet staged in the subterranean dungeon Dr. T has reserved for all non-piano playing musicians.  It’s pure Heironymus Bosch.  Equally memorable is Conried’s “Do-Me-Do-Duds” number which surely qualifies as the quintessence of (dare one use the word?) camp.  Thoroughly delightful.  The songs, by Dietrich’s long-time composer, Frederick Hollander, are all fine, and Dr. Seuss’s lyrics are amusingly satiric, though, again according to Conried, some eleven were excised from the final print.

For Conried it’s the part of a lifetime and he gives a remarkable performance, though Lassie’s latter day friend, Tommy Rettig, also contributes a very assured and controlled one for his age.  Only Hayes and Healey strike one as somewhat too bland.  And special praise to John and Robert Heasley as the Smith Brothers twins, as well as Henry Kulky (“Cuddles” in Cukor’s A Star is Born).

PLEASE NOTE – All members of the Film Buff Series are invited to attend the FRITZ LANG evening of the Main Series as guests of Toronto Film Society.  Just show your film buff membership card at The Theatre, St. Lawrence Centre for the Arts, before 8:00 P.M. on Monday, March 25th, 1974.  If you are already a member of the Main Series, then you may use your film buff membership card to bring a guest.  The program will be:

You Only Live Once (USA 1937)  Dir: Fritz Lang.  With Henry Fonda, Sylvia Sidney.  One of the great German’s most admired American movies depicts an escvaped prisoner and his girl on the run from the law.

Liliom (France 1934)  Dir: Fritz Lang.  With Charles Boyer.  A faithful interpretation of the Molnar play about the earthly and unearthly trials of a carnival barker and a servant girl.  (Under negotiation).