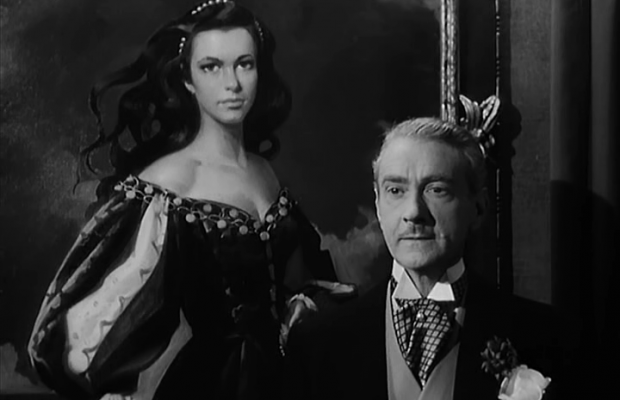 Toronto Film Society presented The Dark Corner (1946) on Monday, December 3, 1973 in a double bill with The 5,000 Fingers of Dr. T as part of the Season 26 Monday Evening Film Buff Series, Programme 2.

In 1946 French critics, seeing the American films they had missed during the war, noticed the new mood of cynicism and pessimism which had crept into the American cinema.  The darkening stain, most evident in routine crime thrillers, was also apparent in prestigious melodramas.  As the years went by, lighting grew darker, characters more corrupt, themes more fatalistic and the tone more hopeless.  By 1949 American movies were in the throes of their deepest and most creative funk.  Never before had films dared to take such a harsh, uncomplimentary look at American life and they would not dare to do so again for twenty years.

Film noir was an immensely creative period–probably the most creative in Hollywood’s history.  It seemed to bring out the best in everyone; directors, cameramen, screenwriters, actors.  Although it is also a sociological reflection, film noir went further than the gangster film.  It attacked and interpreted its sociological conditions and, by the close of the noir period, created a new artistic world, a nightmarish world of American mannerism which was by far more a creation than a simple reflection of its society.  The over-riding noir theme is a passion for the past and present, but also a fear of the future.  The noir hero dreads to look ahead, but instead tries to survive by the day, and if unsuccessful at that, he retreats to the past.  Thus film noir’s techniques, combining realism and expressionism, emphasize loss, nostalgia, lack of clear priorities, insecurity; then submerge these self-doubts in mannerism and style.

Film noir is not a genre.  It is not defined by conventions of setting and conflict but rather by the more subtle qualities of tone and mood.  It is also a specific period of film history and, in general, refers to those Hollywood films of the Forties and early Fifties which portrayed the world of dark, slick, city streets, crime and corruption.  Though all these dates over-lap, film noir can be divided into three broad phases.  The first, the wartime period, 1941-46, was the phase of the private eye and the lone wolf.  The studio look of the period was reflected in The Maltese Falcon, Laura and Phantom Lady.  The second phase was the post-war realistic period from 1945-49.  These films tended more towards the problems of crime in the streets, political corruption and police routine.  The urban look of this phase is seen in Force of Evil, The Killers and Boomerang.  The third and final phase, from 1949-53, was the period of psychotic action and suicidal impulse.  The forces of personal disintegration were reflected in They Live by Night, On Dangerous Ground and Sunset Boulevard.  The third phase films were painfully self-aware; they seemed to know they stood at the end of a long tradition based on despair and disintegration.

By the mid-Fifties film noir had ground to a halt; Americans were eager to see a more bourgeois view of themselves.  For a long time film noir, with its emphasis on corruption and despair, was considered an aberration of the American character.  It has recently become the subject of renewed interest as American movies are again taking a look at the underside of the American character, but compared to such relentlessly cynical films noir as Kiss Me Deadly or Kiss Tomorrow Goodbye, the new self-hate cinema of Easy Rider and Medium Cool seems naïve and romantic.  As the current political mood hardens, the Forties may become to the Seventies what the Thirties were to the Sixties.

Henry Hathaway is one of Hollywood’s most prolific directors with nearly 60 films to his credit from Wild Horse Mesa in 1932 to Shoot Out in 1971.  A robust, skillful director, his films run largely to action and adventure.  Kiss of Death, Call Northside 777 and Fourteen Hours are other films noir to his credit and The House on 92nd Street was the first film to  combine documentary techniques with the dramatic.