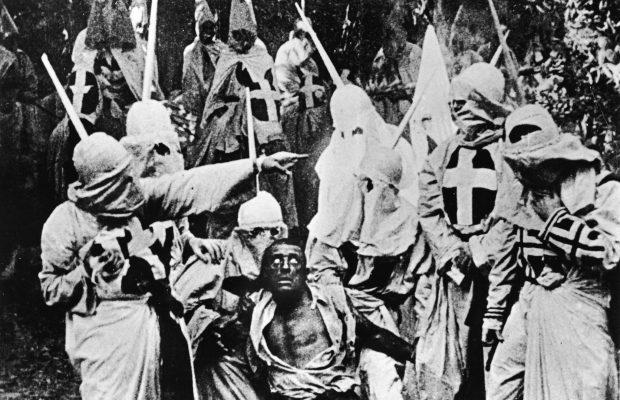 Toronto Film Society presented The Birth of a Nation (1915) on Monday, January 18, 1960 as part of the Season 12 Monday Evening Silent Film Series, Programme 3.

The Birth of a Nation (USA 1915).  Directed by D.W. Griffith.  Adapted by Griffith and Frank Woods from Thomas Dixon’s novel The Clansman.  Photographed by G.W. Bitzer.  Produced by the Epoch Producing Corporation (Griffith).

The Birth of a Nation was the first “epic” production of the American cinema; the first to be “road-showed” at advanced prices with a specially arranged musical score; the film in which Griffith, who produced it on his own, brought into full use all the cinematic techniques he had originated or developed through the years.  Generally considered by film critics and historians (then and now) to be one of the great motion pictures, it was a sensational money-maker.  It has also perhaps created more bitter controversy, again extending to our own time, than any film ever made, because of its treatment of the Negro’s role in the post-Civil War and “Reconstruction” period.  In the past it has caused race riots as well as vehement attacks by Negro and liberal white organizations and individuals (also, of course, by the Communists!)  It drew considerable criticism even recently in Toronto when it was shown by the University of Toronto Film Society, the United Nations Film Society, and several local theatres (in the latter case in a much-cut version).  Well, let’s face it–Griffith’s attitude toward the Negro was certainly biased, as one would expect from his traditional Southern upbringing–but it seems unlikely that he intended a deliberately “anti-Negro” film.  While he treats his unsympathetic Negroes melodramatically and his sympathetic ones patronizingly, he more specifically blames the white “Northern fanatics and carpet-baggers” for “encouraging” the Negroes to rise.  Generally he was probably telling the truth as he believed it to be, from his highly limited point-of-view.  (One has only to read Booker T. Washington’s Up from Slavery to realize the areas of intelligent, constructive Negro sentiment and activity utterly ignored by Griffith).  He does treat Lincoln with a sympathy and respect that must have given his Southern fans a few bad moments!  When, after the University showing here, a feminine film-society colleague was inveighing against the picture, I suggested that mostly the incidents the film chooses to portray were probably pretty authentic.  “Yes, I think all that happened!” she agreed, “but he only shows us one side of it!”  Suppose we say the lady hit the nail on the head and let it go at that.  I would lend no aid nor comfort to a showing of this movie sponsored by the Little Rock Segregationist Society; but there seems no reason why a mature and specialized Film Society group should not examine it.  As we did not show Triumph of the Will in order to promote a revival of Nazism, nor Potemkin to glorify the Soviet, so we do not show The Birth of a Nation to insult Negroes.  We have shown all, of course, because they are notable pieces of film-making with a legitimate place in film history.

The Museum of Modern Art calls it “unquestionably the most important film ever made–did not earn its great name because of its subject matter, length or complexity alone.  Here Griffith–forced this new medium of pictorial expression to essay its unique powers fully for the first time.  The Birth established once and for all the basic nature and capacities of t he motion picture, akin rather to musical composition than to a literary or dramatic style, and essentially disjunctive, with its unlifelike but emotionally effective succession of long shots, medium shots and close-ups, and its rapidly alternating cross-cut scenes,  This film convinced everyone that the film was indeed an entirely new form of expression, with unguessed power to stir the imagination.”

James Agee in The Nation wrote of Griffith’s “power to create permanent images.  All through his work there are images as impossible to forget, once you have seen them, as some of the grandest or simplest passages in music or poetry.  The most beautiful single shot I have seen in any movie is the battle charge in The Birth of a Nation.  I have heard it praised for its realism, and that is deserved; but it is also far beyond realism.  It seems to me to be a perfect realization of a collective dream of what the Civil War was like, as veterans might remember it 50 years later, or as children 50 years later might imagine it.  Griffith was a great primitive poet, a man capable, as only great and primitive artists can be, of intuitively perceiving and perfecting the tremendous magical images that underlie the memory and imagination of entire peoples.  There are many others in that one film: the homecoming of the defeated hero; the ride of the Clansmen; the rapist and his victim among the dark leaves; a glimpse of a war hospital; dead young soldiers after battle; the dark, slow movement of the Union Army away from the camera, along a valley which is quartered strongly between hill-shadow and sunlight; all these and others have a dreamlike absoluteness which, indeed, cradles and suffuses the whole film.  This was the one time in movie history that a man of great ability worked freely, in an unspoiled medium, for an unspoiled audience, on a majestic theme that involved all that he was; and brought to it, besides his abilities as an inventor and artist, absolute passion, pity, courage, and honesty.  The Birth of a Nation is equal with Brady’s photographs, Lincoln’s speeches, Whitman’s war poems; for all its imperfections and absurdities it is equal, in fact, to the best work that has been done in this country.  And among moving pictures it is alone, not necessarily as “the greatest”–whatever that means–but as the one great epic, tragic film.

Even if Griffith’s best work there is enough that is poor, or foolish, or merely old-fashioned, so that one has to understand, if by no means forgive, those who laugh indiscriminately at his good work and hi bad.  But I look forward to killing, some day, some specially happy giggler at the exquisite scene in which the veteran comes home in The Birth of a Nation.”

Lewis Jacobs in The Rise of the American Film says: “The raging controversy (over the film’s theme) awakened the nation to the social import of moving pictures.  But this was overshadowed by the great acclaim for the picture’s artistry, its rich imagery and powerful construction.  So advanced was the film structurally that even today it stands as an accomplishment of great stature.  All Griffith’s earlier experiments are here consolidated: the use of camera to build scenes, the pacing of shots, the sensitive manipulation of camera devices for transitions, simultaneous action, movement of all kinds–all fused by brilliant cutting.  The chief difference between this film and Griffith’s past efforts lies in the intensity and scale of the application of the cinematic elements.  His conception had ripened; an unerring command of the medium was now his.  The Birth of a Nation pulsates; it is life itself.  From the very beginning, shots are merged into a flux.  Either the actions within the shots have some sort of movement, or the duration of shots is so timed that the effect is one of continuous motion.  This motion creates a ‘beat’ that accents the relationships of the separate elements of the film and produces a single powerful effect.”

Just to top off, Woodrow Wilson said the film was “like writing history with lightning”.