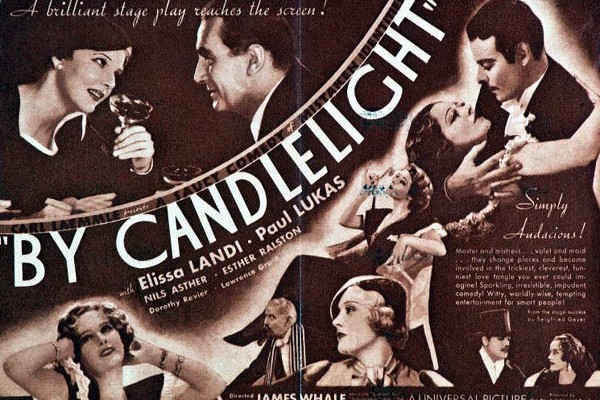 Toronto Film Society presented By Candlelight (1933) on Monday, November 8, 1976 in a double bill with Zoo In Budapest as part of the Season 29 Monday Evening Film Buff Series, Programme 2.

James Whale is still remembered by film-goers and film historians mainly for the two first (and best) versions of the Frankenstein story: Frankenstein (1931) and The Bride of Frankenstein (1935).  Yet his career covered a much wider range than that of the horror film and he was one of the top directors at Universal throughout the 1930s, turning out sophisticated comedies, dramas and even musicals that displayed the stylishness, the visual intelligence, and the control of divergent tones and moods that make his horror films still so superior to most of their competitors.  His comedy Remember Last Night? (which was shown at a recent TFS seminar) remains surprisingly modern in its combination of surrealism and black comedy, and other noteworthy and still rarely-seen films include Journey’s End (1930), One More River (1934) and Show Boat (1936).

Whale was born in England in 1889 (though the usual, and apparently inaccurate, date is given as 1896).  He began his career as a newspaper cartoonist, then served as an infantry officer in World War I.  While in the army, he became interested in acting and after the War turned to the stage for his career.  From acting, he moved to stage management and in 1929 scored a huge success with R.C. Sherriff’s play about trench-warfare, “Journey’s End” (he was to continue a collaboration with Sherriff in Hollywood, adapting another of his plays and using him as scriptwriter on other occasions).  Whale was invited to Hollywood to film Journey’s End and this began a very successful career that had the side-effect, however, of associating him, perhaps indelibly, with his most popular works, the Frankenstein films and The Invisible Man (1933).  His career began to falter around 1940, however, and in 1941 he abruptly retired from film direction and contented himself with intermittent work for the stage and an abortive involvement in only one further film, a few years later.  He died in mysterious circumstances in 1957, after a fall into the swimming-pool of his home, and the Film in Review biography of his life hints darkly at his involvement in a “scandal” during this period.

Although his comedies are rarely screened nowadays, they received a warm welcome on their first appearance.  Mordaunt Hall of the New York Times called y Candlelight: “a pleasantly amusing diversion.  It is shallow and somewhat obvious in spots, but its little intrigue is set forth with admirable cunning by James Whale and others.”  After summarising the plot, the review continues:

Mr. Whale shows a fondness here for wines and brandy, for whenever he wants some action, either Josef or the Prince indulge their fancy for a bottle of wine or a glass of cognac.  Marie does not dislike champagne and neither does Countess von Rischenheim, nor the Baroness von Balin, who appears in the early part of the story.  So far as the title is concerned, it is derived from the candles that are brought into the room when the fuses are intentionally burned out.  The Prince always favours the mellow old-fashioned illumination.

Tom Milne, in a more recent article that deals primarily with Whale’s non-horror films, says that: By Candlelight (1933), in Lubitsch rather than screwball style, is equally brilliant [he has just been discussing Remember Last Night?].  With the exception of The Great Garrick, this is probably th most consciously theatrical of all Whale’s films, and he of course allows his hero (played by Paul Lukas) to stage his own mise-en-scène.”  Milne praises in particular the opening sequence, with its deliberate misleading of the audience as to the identity of the characters, and the “marvellously funny” dénouement, with its “superb performances by the entire cast and a crackling display of wit.