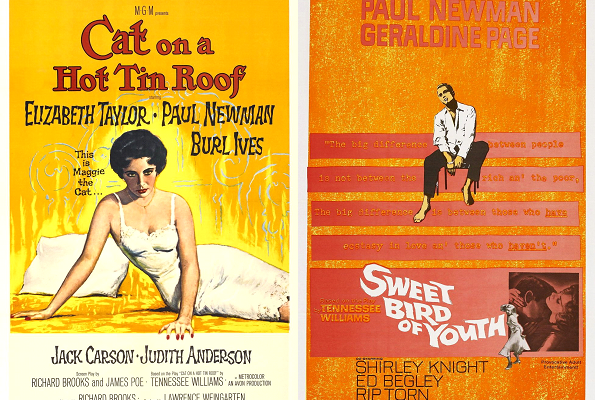 This afternoon’s programme is a tribute to the rich contribution made to the American cinema by the late Pulitzer Prize winner playwright, Tennessee Williams.  His name is attached to no fewer than 15 feature films, 13 of which are adaptations of his plays often done by other writers, one of which The Roman Spring of Mrs. Stone is from a Williams Novel, and another of which, Baby Doll, is a script Williams wrote directly for the screen (albeit from one of his early one-act plays).

When originally played on the Broadway stage, Williams’ plays could be readily identified by certain shared thematic and stylistic touches.  Seemingly genteel southern families riddled by guilt and repression encountered desire in steamy settings where greed or ambition would also play a role.  Some Williams watchers have said that most of his major female roles seem to have been written with the same actress in mind, Tallulah Bankhead.  Miss Bankhead, in actual fact, played only one of his heroines, Flora Goforth, inthe fourth production of “The Milk TrainDoesn’t Stop Here Anymore” (later made into the film Boom!).  But her special personality is evoked int he text of each of “The Glass Menagerie“, “A Streetcar Named Desire“, “The Roman Spring of Mrs. Stone” and “The Night of the Iguana“, as well as in today’s two films.

With such uniformity from play to play, one might expect that the resulting films would also bear a striking family resemblance.  The fact that they don’t attests more to the strong individuality of the films’ directors than to any weakness in the Williams’ pen.  For instance, veteran director Irving Rapper’s version of The Glass Menagerie for Warner Brothers bears more resemblance to Rapper’s earlier Bette Davis vehicles for that studio than to anything else.  Elia Kazan, who directed Williams plays on Broadway, gave Streetcar  and Baby Doll the dramatic lighting and method acting that are hallmarks of many of this director’s other films. Suddenly, Last Summer carries director Joseph L. Mankiewicz’s typical voice-over flashbacks to their ultimate exploitation.  And John Huston’s adaptation of The Night of the Iguana echoes his own Key Largo more than the other Williams-based films.  In other words, a quick glance at the filmic adaptations of Tennessee Williams’ plays lends credence to all those “auteurists” who claim that in film it is more than likely the director’s hand that will be master of the artistic creation.

The director of both of today’s films is Richard Brooks, who, as a writer-director, first attracted serious critical attention with such black and white working-class films as The Blackboard Jungle and The Catered Affair in the 1950’s.  His two Tennessee Williams films should, however, be grouped with his later Technicolor adaptations oft he other literary sources, such as The Brothers Karamazov, Elmer Gantry and Lord Jim.  One might even argue that the man-hungry heroines of Cat and Bird directly promise the restless housewife of The Happy Ending (1969) or the raving heroine of Looking for Mr. Goodbar (1977).  Underlying all these films from Jungle to Goodbar, we find a unifying rebelliousness in either sex.

Maggie the Cat, Chance Wayne, and the Princess Cosmonopolis do indeed seem at home, then, among the filmic protagonists of Richard Brooks.  But, as a result, does Brooks’ own style totally overshadow the Williams text?

The answer is, fortunately, no.  Brooks was extremely sympathetic to the material he was filming and tried to retain it as much as the prevailing moral codes and his own filmic (as opposed to theatrical) sense would allow.  Still, his flexibility in adapting material could be construed by some as excessively liberal.  For instance, when his own novel, “The Brick Foxhole” was made into the film Crossfire in 1947, Brooks objected not at all when the hero’s social problem–that of being a persecuted homosexual–was blithely transformed into that of a persecuted Jew. 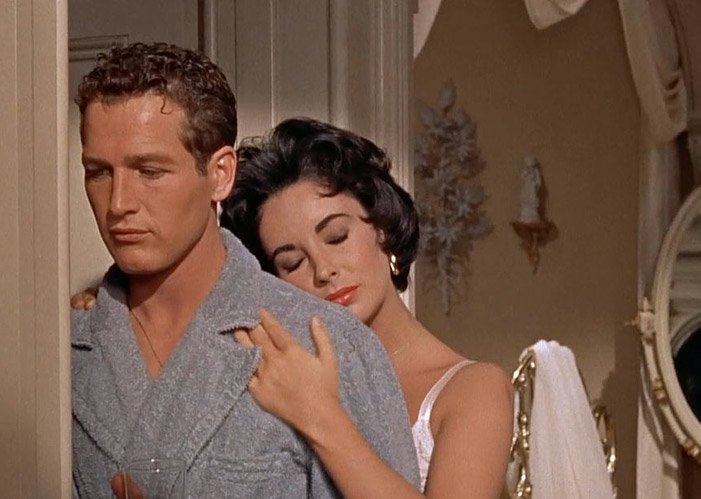 In adapting Cat on a Hot Tin Roof, Brooks was faced with how to treat the problem that was at the core of the Williams play: that Brick, the hero, is rejecting his wife because of his love for his dead football  buddy, Skipper.  The production code obliged Brooks to alter the embarrassing homosexuality to a kind of hero-worship and to, as he put it in a 1965 interview, “dramatize that Brick rejects Maggie not because he is incapable of loving her, but because he holds her responsible for Skipper’s death.”  Brick’s crime is to have let down his former chum in an hour of emotional need.  The resolution of the film can become much more up-beat than the play’s, as Brick’s sudden understanding of Maggie, of his estranged father and of himself allows him magically to embark on a more fertile future.

Tennessee Williams often cited Cat as the favourite of his plays.  In his Memoirs he says: “It is really very well put together, in my opinion, and all its characters are amusing and credible and touching….I believe that in Cat I reached beyond myself in the second act, to a kind of crude eloquence of expression in Big Daddy that I have managed to give no other characters of my creation.”

In the Kazan-directed Broadway production of 1955, Barbara Bel Geddes, Ben Gazzara and Burl Ives had played Maggie, Brick and Big Daddy, with Pat Hingle as Gooper, Mildred Dunnock as Big Mama and Madeleine Sherwood as Sister Woman.  In the cast changes that were made for the film (Elizabeth Taylor), Paul Newman, Jack Carson and Judith Anderson), the casting of Newman particularly pleased Richard Brooks because the actor could be photographed “for long periods of silent thought”.  The film received six Oscar nominations, including Newman’s first of many for Best Actor and Taylor’s second for Best Actress.  She had, incidentally, learned after two weeks of shooting that her husband, Mike Todd, had been killed in a plane crash.

Audiences flocked to gape at Newman’s blue eyes and rippling pectorals, to goggle at Taylor’s concealed grief, and to gasp at lines like, “When a marriage goes on the rocks, the rocks are there in the bed.”  Cat  was the top money-maker of 1958 and “no-necked monsters” became a household term.

And what did Williams think of all this?  “(It lacked) the purity of the play.  It was jazzed up, hoaked up a bit.”  But as Richard Brooks pointed out, considering the astronomical sum Williams had received for the screen rights, the playwright was no longer in a position to complain.

Richard Brooks was at first reluctant to undertake a filmization of Sweet Bird of Youth.  He felt that by 1962 interest in the 1959 Broadway success had lapsed.  But with four of the original cast available (Paul Newman, Geraldine Page, Madeleine Sherwood and Rip Torn), undertake it he did.  Ed Begley, replacing Broadway’s Sidney Blackmer, would win an Oscar as Best Supporting Actor in the fiendish role of Boss Finley. 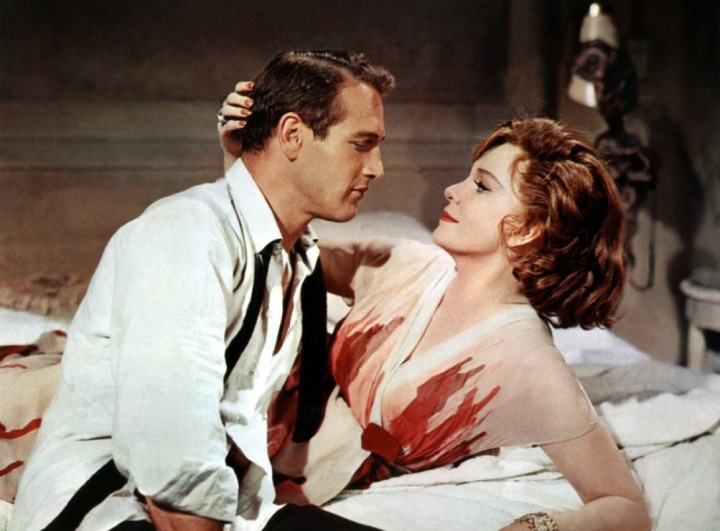 While in Bird, Director Brooks repeated the gaudy colour design and photography of Cat, this time he modified his camera style.  Cat‘s petting, which consisted of virtually only three claustrophobic rooms on three floors of the same house had inspired a great deal of camera movement in order to bring motion to this motion picture.  In Bird, however, Brooks found himself able to diminish the Williams dialogue (especially from the play’s first act), inroduce more variety in sets and reduce the “arty” camera work.

Sweet Bird of Youth is the story of an aging gigolo, Chance Wayne, who latches onto an even less youthful alcoholic movie-star.  the twosome improbably descend on the gigolo’s hometown, where the leading political family has reason to greet the local boy with a variety of boiling emotions.  Among the more readily “acceptable” substitutes that Brooks brought to the Williams play are an abortion for Boss Finley’s daughter (rather than syphilis and sterility), and permanent facial disfigurement for Chance (rather than castration).  The happy endings for both the films star and Chance are, of course, a reverse of the play’s.  The film also incorporates flashbacks to a younger, more innocent Chance.  And, even more importantly, Page’s filmic interpretation of Alexandra is lightened from the unremittingly bleak stage version to become one of the ultimate camp performances in film history.  Her final triumphant exit is a gem!

This time, did Williams object to Brooks’ changes?  Evidently not.  “The film is probably better than the play,” he said.