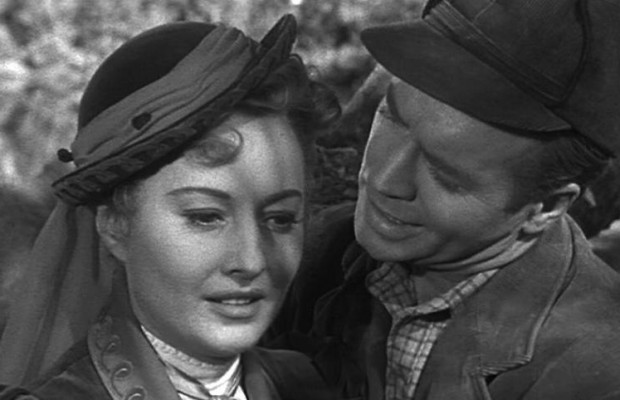 Toronto Film Society presented All I Desire (1953) on Monday, January 20, 1975 in a double bill with Kiss Tomorrow Goodbye as part of the Season 27 Monday Evening Film Buff Series, Programme 3.

Douglas Sirk (b. 1900) made ten films in Europe and thirty films in Hollywood between 1935 and 1959.  Although his films pleased an enormous audience at the time of their release, it is only since his retirement that Sirk’s achievements have received serious critical appraisal.  It should be remembered that, in his early Hollywood films, Sirk had little freedom to use his own ideas, with the notable exceptions of Summer Storm (1944), A Scandal In Paris (1946) and Lured (1947)–three films which predicted his extraordinary talents.  Only after the commercial success of Magnificent Obsession in 1954 did he acquire the freedom he needed to create his masterpieces Written on the Wind (1957) and The Tarnished Angels (1958).  His last film Imitation of Life (1959) was Universal’s bggest box-office success.  Perhaps Sirk’s knowledge of classic plays, gained through his career as a theatre director in Germany, empowered him to elevate the genre of the American melodrama to the level of Greek tragedy.

When I first saw Sirk’s films in the fifties, I dismissed them as made-for-the-masses pap.  But upon re-seeing them recently, I find them far more interesting than many acclaimed ‘art’ films.  I especially like Sirk’s smug, self-righteous American world-view; the way his films abound with cliché images; his larger-than-life characters often shown trapped in a setting of turmoil and decay; and the way he presents all this with the most extravagant use of emotional and visual style.

All I Desire is one of a series of films that Sirk made about small-town American life at the turn of the century (among them Take Me To Town [1953]).  On On the surface, it is a standard ‘woman’s weepie’ story full of heavy social drama and personal conflicts.  Barbara Stanwyck portrays Naomi, a woman who, having left her husband and children ten years previously for an unsuccessful career as an actress, returns home hopeful of fulfilling her dreams of reconciliation, and instead finds pretense and disillusionment.  Beneath the surface, it is an attack on the moralism of middle-class America.  The film’s original title was ‘Stopover’, a title that Sirk felt deepened the irony of the film.  In the original ending (which was changed against Sirk’s wishes) Naomi leaves–her homecoming has only been a stopover.

Barbara Stanwyck was born in Brooklyn in 1907.  Ladies of Leisure for Frank Capra was her first real success.  Her screen roles project a self-assured, independent woman, often susceptible to love, but not above using her wiles to manipulate men.  One of Hollywood’s better actresses, she has been nominated for an Academy Award in Stella Dallas, Ball of Fire, Double Indemnity and Sorry, Wrong Number, but has never won an Oscar.