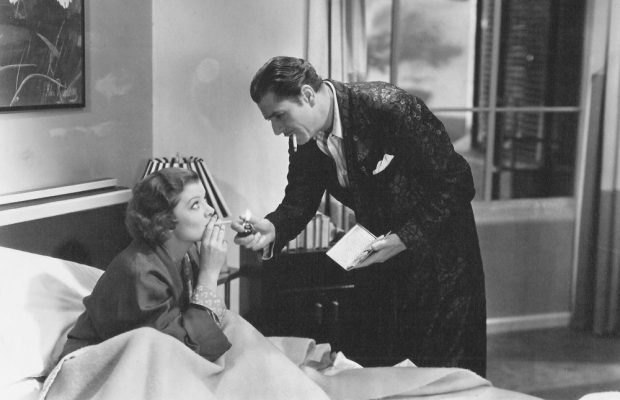 Toronto Film Society presented Penthouse (1933) on Sunday, November 4, 2012 in a double bill with Behind Locked Doors as part of the Season 65 Sunday Afternoon Film Buffs, Programme 2.

This film was made on a relatively low budget, and was enhanced by excellent character actors. Nat Pendleton has a rare chance to shine here, playing not just some half-witted henchman, but the actual leader of a gang. Dithery Charles Butterworth lends stellar support as a loyal manservant. But this is more than just a nifty little programmer. It was director W.S. “Woody” Van Dyke’s bid to launch unappreciated actress MYRNA LOY into the stardom he knew she deserved.

In her autobiography, Being and Becoming, Loy recalled that Van Dyke had a lot more faith in her than she did in those days. He startled her once by taking her into the studio commissary at lunchtime and loudly announcing “This girl is going to be a star!” He had a promising upcoming project he wanted to cast her in, but MGM balked; they were unsure Loy could handle a leading role. In response, Van Dyke made Penthouse a virtual 90-minute screen test, to show the studio her potential. It worked, too; Penthouse won Myrna the role that turned her career around completely, that of “perfect wife” Nora Charles, in Van Dyke’s The Thin Man (1934). Penthouse and The Thin Man have a lot in common: the same studio, director and female lead, as well as the same clever screenwriters, Goodrich and Hackett. Penthouse was filmed just before the strict Motion Picture Production Code went into effect, and its risqué dialogue and shady leading lady would not have been allowed after 1934. Since it did not have Code approval, Penthouse was not available to be shown on television for decades, and so is little known today.

Penthouse was hard-working Loy’s 49th film. For most of her movie career until then, she had been rather oddly typecast as a vamp, one of those deadly femme fatales who slunk menacingly across silent screens, luring men to their doom. For unfathomable reasons that have been lost in time, red-haired, green-eyed, freckle-faced Myrna Williams from Montana was usually cast as an evil Oriental (though she sometimes branched out to play evil Mexicans or other insidious “ethnics”). “They cast me as a Chinese in The Crimson City with Anna May Wong,” she later recalled. “Up against her, of course, I looked about as Chinese as Raggedy Ann.” The experience left level-headed Myrna with an abiding annoyance with racial typecasting. “Why does every black person in the movies have to play a servant?” she pointed out. “How about a black person walking up the steps of a courthouse carrying a briefcase?”

Her rancher father had been, at 21, the youngest person ever elected to the Montana legislature. He died in the 1918 Spanish Flu epidemic, when Myrna was 13 years old. Her mother moved the family to Venice, California, just west of Los Angeles. Myrna Williams studied to be a dancer, and attended Venice High School. While there, she was among the students chosen by acclaimed sculptor and Venice High art teacher Harry Winebrenner to pose for three sculptures. The statues were installed in front of the school in 1921, when Myrna was sixteen.

The dramatic central “Spiritual” figure she’d posed for was a diaphanously-gowned Venus, stylistically reminiscent of that era’s swanky chrome hood ornaments. It rose gloriously from a giant clamshell, flanked by two crouching figures (“Mental” and “Physical”). The trio were originally placed in the centre of a long reflecting pond, but the setting and statues were to change many times over many decades. The figures had been sculpted with metal rebar armatures, covered with cement and then painted – media that allowed for alteration or repair if necessary. Obsessive sculptor Winebrenner tinkered with them several times during his tenure at the school, changing Myrna’s hair and upraised arm and re-arranging the crouching figures.

Though the statues suffered damage in the powerful Long Beach earthquake of 1932, they came through much better than the school itself. Its fancy old brick facade and front porticos crumbled and fell, and some schoolrooms collapsed entirely. Luckily, the quake struck at 6:00 p.m., after everyone had gone home, so there were no fatalities. By the mid-1930s, the repaired school had a sleek Art Deco look, and the statues stood in an attractive garden.

Myrna’s statue appears very briefly in the movie Grease (1978), as Venice High School’s exterior was used to portray fictional “Rydell High”. If you look closely at the opening scene, just after the movie’s cartoon credits fade into an actual shot of the high school, you can see the white Myrna statue off to the side when John Travolta and other students arrive at school. At that time, she was minus her upraised left forearm.

In the 1980s, a devoted but somewhat heavy-handed school caretaker struggled to salvage the battered statue. By then, Myrna’s arm had been broken off repeatedly, her face chiselled off and sanded down, and she’d been decapitated more than once. He re-sculpted what was left of her, changing the arm position in an effort to keep it from being snapped off. He repaired the face, turned her upturned head to look forward, and gave her a new hairstyle. The clamshell was removed, leaving her standing on a plain brick pedestal. The two flanking figures remained, also perched on plain brick. The caretaker re-sculpted their nearly-obliterated features, making one appear black and one Hispanic, to better reflect the population of Los Angeles.

Though the result was surrounded by a cage-like metal fence, vandals ultimately prevailed, eventually blowing up the head entirely. The headless, rust-stained statue remained on its pedestal for some time, but the effect was depressing. In 2000, local Boy Scout Zachary Noel earned a merit badge by removing what remained of the statue, in an effort to “beautify” the school grounds.

The statue was much missed. Venice High School has always been very proud of its star pupil; it even calls its drama and speech awards the “Myrnas” in her honour. The school’s alumni association began a long fundraising campaign, and in 2010 a bronze replacement sculpted by artist Ernest Shelton was unveiled in front of a large crowd. The new statue is somewhat taller than the original, and is minus the clamshell and crouching figures. Among those speaking at the unveiling was actor Beau Bridges (son of Lloyd Bridges, brother of Jeff Bridges), another Venice High graduate. He recalled appearing in the film The Red Pony with Loy in 1949, when he was 6 years old, as well as passing her statue every day at school as a teenager. “I think it’s wonderful that you’ve done this,” he told the crowd. “I really believe that our journey begins with our history.”

The real Myrna lived a long, full life. Once The Thin Man was released, she became one of Hollywood’s greatest stars, even voted the “Queen of Hollywood” in 1937 (her frequent co-star Clark Gable was voted “King”). Her new “perfect wife” persona endured and became central to such classics as The Best Years of Our Lives (1946), Mr. Blandings Builds His Dream House (1948) and Cheaper By the Dozen (1950), as well as the popular string of Thin Man sequels opposite her most frequent co-star, William Powell. But realistic Myrna knew that the “perfect wife” typecasting was every bit as bogus as her “femme fatale” stint had been. “Some perfect wife I am,” she remarked. “I’ve been married four times, divorced four times, have no children, and can’t boil an egg.” 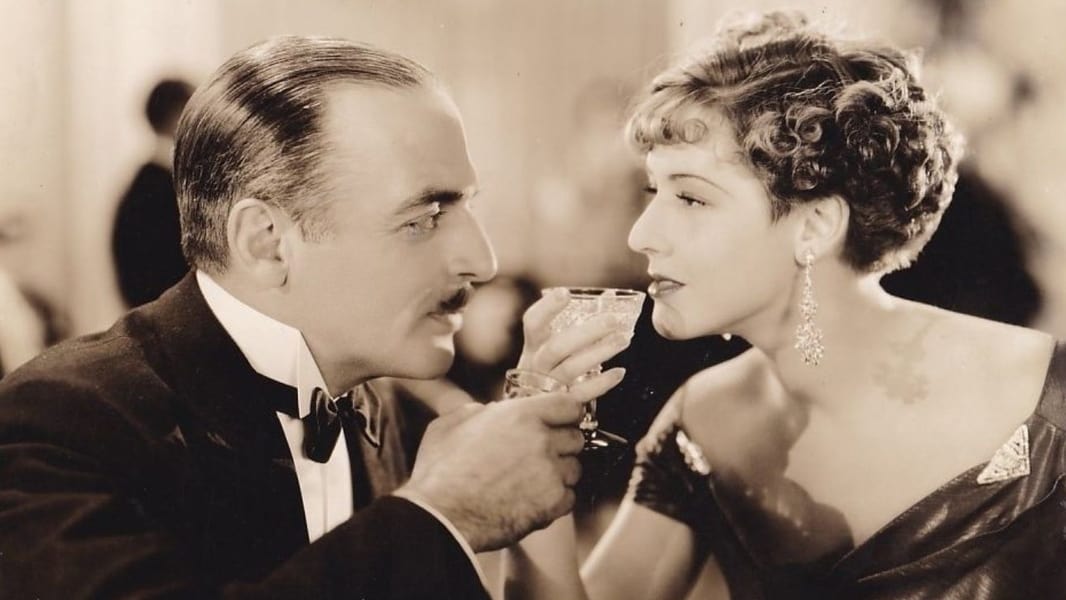 WARNER BAXTER joked that he had an early predisposition toward show business: “I discovered a boy a block away who would eat worms and swallow flies for a penny. For one-third of the profits, I exhibited him in a tent.” In 1898, his widowed mother moved the family to San Francisco. After the 1906 earthquake destroyed the city, the Baxters lived in a makeshift tent for weeks, “in mortal terror of the fire.” He began performing in vaudeville, then went on to Broadway, which led to silent films. Baxter soon became a successful matinée idol in the silents, but he was always uncomfortable with movie stardom. He was a shy man, and hated being gawked at in public. Like his closest friends, fellow introverts Ronald Colman and William Powell, he loved acting but shunned the limelight in his off-hours; those three were the despair of studio publicists, who preferred more outgoing stars.

Baxter won an Oscar as Best Actor playing the Cisco Kid In Old Arizona (1928), the first “all-talking” western. Raoul Walsh had been set to play the part as well as direct, but lost an eye in a freak accident when a jackrabbit leapt through t e windshield of his car. Walsh gave up acting and stuck to directing from then on. He hired Baxter to star instead, and the production was a big success.

Though Baxter was happy to win the Oscar, he wasn’t keen on making more westerns. He was uncomfortable working with horses, and glad to trade in his spurs for more urban roles. Baxter played theatrical directors several times, most memorably in 42nd Street (1933) where he barked out the classic line “You’re going out there a youngster, but you’ve got to come back a star!” to Ruby Keeler.

Many feel Warner Baxter’s best role came in The Prisoner of Shark Island (1936), playing the doctor who treated Abraham Lincoln’s assassin. In addition to acting, Baxter was an inventor. In 1935 he co-created a revolver searchlight which would allow a gunman to shoot in the dark. He later developed a radio device to allow emergency crews to change traffic signals from two-blocks away, allowing them to pass safely through intersections. Baxter financed its successful installation at an intersection in Beverly Hills in 1940. His health and career both slipped in the 1940s, and he moved to making B-pictures. He began making the successful low-budget Crime Doctor series in 1943. He had suffered a nervous breakdown, but the pace of making the series – two films a year – was relatively easy on him. He was also plagued by severe arthritis, and by 1951 was desperate enough to undergo a lobotomy (yes, really) to relieve the pain. Baxter died of pneumonia soon after the surgery, aged 62. He left his wife of 33 years, actress Winifred Bryson.