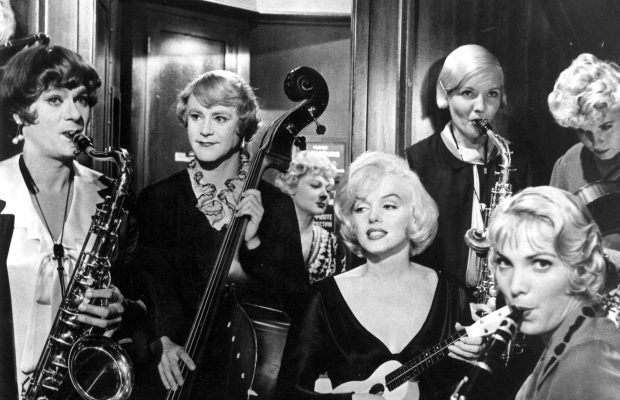 Toronto Film Society presented Some Like It Hot (1959) on Thursday, September 7, 1967 as part of the Season 19 Summer Series “And On to the Present”, Programme 4.

More than a quarter-century before Billy Wilder, that eminent brain surgeon Oliver Norvell Hardy rang the changes on the sexes.  This is the last in our summer festival of Laurel and Hardy movies, and perhaps is one of the strangest of them all.

The dialogueless cartoons in which the insouciant Roadrunner forever outwits the diabolically clever (?) Coyote are among the chief glories of the WB boys, relying as they do on sheer invention of action just as did the early silent comedies.

This is the last in our summer festival of WB cartoons, and we wish to thank Aldo Maggiorotti and Warner Brothers for their kind assistance in making the cartoon series possible. 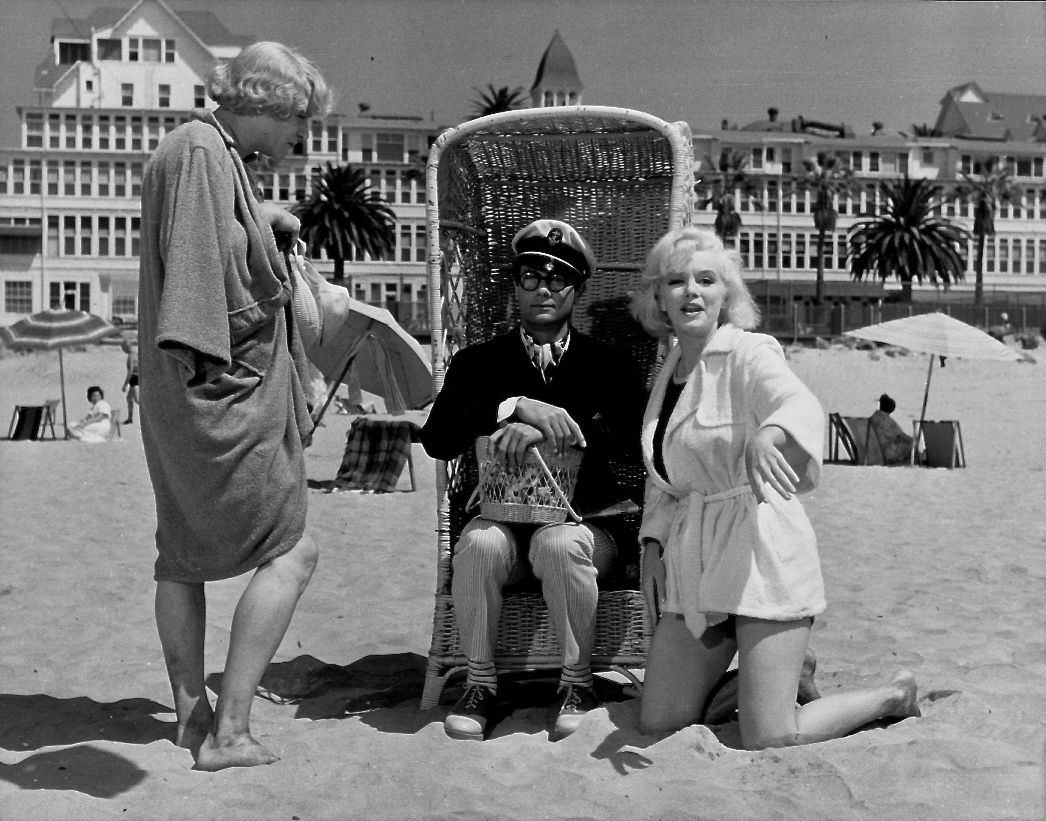 Popular legend used to have it that the dirtiest girls were the ones who exposed the most skin to male eyes.  The problem for Billy Wilder in writing, directing and producing a Marilyn Monroe flicker was how to expose Marilyn’s skin in all innocence.  The solution turned out to be quite elaborate and farcical.

If Jack Lemmon and Tony Curtis know that George Raft knows that they know that his mob has committed a St. Valentine Day-type massacre, wouldn’t Jack and Tony have to take it on the lam dressed as women with a troupe of sexy girl entertainers including Marilyn Monroe?  Of course they would.

Would it be dirty of Marilyn to expose her sexy skin before a couple of virile young men if she thought they were tomatoes?  Of course it wouldn’t.

The problem for Jack and Tony is that they cannot ogle without exposing their maleness.  Nor can they help ogling an exposed Marilyn because they really are male.  The problem for the male audience is how to see more of Marilyn before Wilder coyly draws the blinds.

The result is dirty innocence or call it innocent dirtiness–a clever cleaving unto of “Ladies’ Night in a Turkish Bath” with “Charley’s Aunt”.

To assure traditionalists, Wilder has fastened a subsidiary boy-meets-girl theme to the main plot.  In this one, Tony pretends to be a temporarily frigid Cary Grant so that he can make a species of the ordinary kind of time with Marilyn.  (Inside gossip informs the world that the world that the real-life Tony has a lifelong mimic of the aforesaid Cary.  Picture it: Tony’s natural argot is of the “Look at me, Mom, I’m dancin'” variety, whereas Grant’s is Bow Bell.)

But there’s nothing very farcical or even suggestively smutty in these tactics.  So a second subsidiary theme is fashioned in which Joe E. Brown–multi-millionaire stage-door john–falls for Jack Lemmon.  Lemmon resists for a while, but cannot hold out forever against Joe’s stocks and bonds.  This sets the screen for the most brilliant stroke of all–the last line of dialogue and probably the first line Wilder wrote: Jack pleads with Joe: “You can’t marry me.  I’m a man!”.  Joe replies, putting an end to Jack’s case:  “Nobody’s perfect”.

What is Wilder’s framework–the gangsters–doing while most of the movie is going?  Nothing, really.  Having provided the raison d’être for its farce and an opening and closing chase, we can only assume that the gangsters are mostly off pursuing their own droll but innocent merriment, to make room for Wilder’s Some Like It Hot.

Incidentally, frameworks have given Billy Wilder (Billy is his certificated name, folks) trouble before.  His narrator in the movie Sunset Boulevard is a dead man.