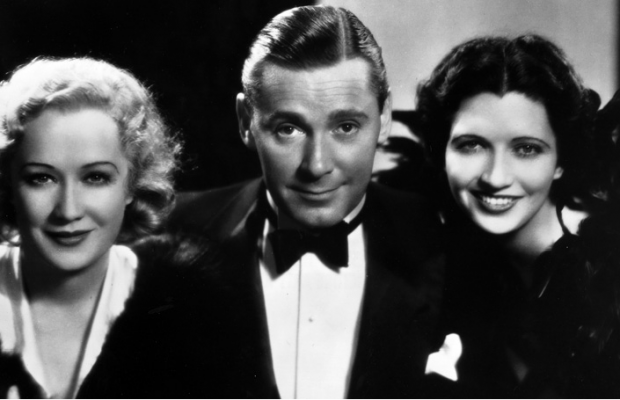 Toronto Film Society presented Trouble in Paradise (1932) on Monday, January 3, 1977 in a double bill with The Lost Squadron as part of the Season 29 Monday Evening Film Buff Series, Programme 5.

The range of Lubitsch’s art is without parallel on the screen.  Comedy, drama, satire, fantasy, tragedy, farce, spectacle–he has mastered them all.  Yet even such astonishing versatility would not have given his work so wide an appeal had it not been for his quasi-Shakespearean concern with people, the multi-colored characters who populate and quicken his films.  They are a raffish lot and he has delineated them with an acidity that makes them as real to us as our closest friends.  He has subordinated everything to them, frequently even the stories of his films.  In a Lubitsch film, the play is not the thing–it is but a device wherewith he can reveal people to us-their petty bickerings, their foibles and weaknesses, vanities, desires, dreams, disillusionments, in the “human-all-too-human” comedy of life.  But perhaps it is as a farceur that he is best known.  Most of the time he is content not to scratch the surface of his characters too deeply but just to show us how thin the veneer of their “respectability” usually is.  After that, he lets them go with a wink or a leer, and we laugh with him, recognizing these all-too-familiar traits in ourselves.  It is all good-natured fun and the world is at least that much better off for having had it.

Critics have marked his blending of Gallic zest with Attic wit, albeit it would seem that the culture of Gaul and Hellas are not the well-springs of his inspiration so much as a considerably more latter-day Hungary and the Balkans.  Lubitsch (a Balkan name, incidentally) employs a Central European harshness and irony of attack in achieving his effect–it is the repartee of the cafés and clubs as in that exclusive Budapest club with its sign, ‘Member may not bring their mistresses as guests unless they are the wives of other members.’

Gaston’s and Lily’s world is the amoral unemotional world of the comedy of manners, a world in which charm and acuteness are successfully pitted against vanity, pompousness and self-deception.  Trouble in Paradise is comedy in the classic tradition which Lubitsch inherited directly from the Austro-Hungarian drama.  However it contains no knockabout farce.  Incongruity is the commonest source of laughter, whether it occurs in frantic slapstick or in well-turned dialogue; and in Trouble in Paradise incongruity abounds.  The director has made Herbert marshall, Miriam Hopkins and Kay Francis voice any sentiment savouring of the romantic in a highly stylised way that deliberately burlesques the emotional, the more so in that the unromantic almost invariably occurs in the same speeches and is given exactly the same treatment, with ludicrous effect.  None of the players is for a moment out of key; and one never consciously notices the transitions from the stylised to the naturalistic.  Most of the wit arises from the central situations and the dialogue.  The script is a model of economy.  How swiftly, for example, the character of Mme. Colet is drawn.  The story is told against a background of opulence, a burlesque of the romantic in a conventionally romantic setting.  Though it is the product of a stage tradition and much depends on dialogue, it would be incorrect to describe Trouble in Paradise as a ‘dialogue film’.  Essentially it is a sound film, which effectively uses sound other than dialogue–the click of keys, the opera, Lily’s singing as she packs, the wheezing mumblings of the manservant, the noise of feet on the stairs, the door buzzer after the robbery, the hubbub of the Italians–and is accompanied almost throughout by music that indulges in variations on the two songs heard at the beginning and comically underlines the scenes with the suitors.  After 19 years the content of Trouble in Paradise still seems as fresh as the execution is masterly, and for me it remains not only the greatest work of one of the cinema’s few really great directors, but the best comedy of manners yet produced in the medium of the sound film.

After Lubitsch’s funeral in 1947, his friends Billy Wilder and William Wyler were walking sadly to their car.  Finally, to break the silence, Wilder said, ‘No more Lubitsch,’ and Wyler answered, ‘Worse than that–no more Lubitsch films.’

Pieces of Time by Peter Bogdanovich