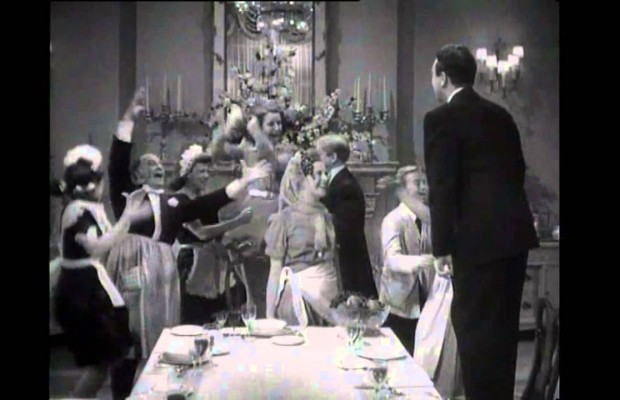 This film’s original advertising tagline–“THE SINATRA SHOW”–clearly shows its main attraction at the time of release.  This was the first RKO film for Sinatra, in what was to be a

3-pictgure deal.  However, Louis B. Mayer bought out his contract to bring him to MGM, and the remaining two films were never made.  With Sinatra in mind, RKO purchased the rights to this moderately successful Rogers and Hart Broadway musical (which had also starred Jack Haley) for $15,000.  Frank isn’t top-billed here because RKO’s contacts with Michele Morgan and Jack Haley prevented higher billing.  The studio jettisoned all but one of the original Rogers and Hart songs (keeping only “Disgustingly Rich”) and added new ones.  The four songs Sinatra sings were specially written by Jimmy McHugh and Harold Adamson to accommodate his singing style.  One, “I Couldn’t Sleep a Wink Last Night,” was nominated for an Oscar for Best Song, but lost to Alice Faye’s “You’ll Never Know.”

given lines and a character to play (admittedly, the character he’s playing here–“Frank Sinatra”–isn’t that much of a stretch).  The is the 1940s Sinatra, long before the Rat Pack/”Chairman of the Board” stuff, in the days back when he was a skinny, shy charmer with an amazing voice.  This remained his basic screen persona until the 1950s, when his Oscar-winning performance in From Here to Eternity (1953) ushered in much grittier Sinatra roles.  These in turn were supplanted by the Swinging ’60s “ring-a-ding-ding” Frank.

Multitalented Sinatra had both strengths and weaknesses as a film actor.  He was a very quick study, even able to learn to dance well enough to keep up with Gene Kelly at MGM.  But he

was hampered by impatience.  By the 1960s, after he’d earned the power to call the shots, not all actors could (or would) work with him.  Sinatra (a.k.a. “One-Take-Charlie”) thought rehearsals unnecessary and preferred to wing it in films like Ocean’s Eleven (1960) and Robin and the Seven Hoods (1964).  “I’m a performer,” he explained.  “I’m better in the first take.”  He was always a man of strong opinions, including some harsh ones about his own successes: he never liked the song “Strangers in the Night,” no matter how popular it was, and thought his huge hit “My Way” was “self-serving and indulgent.”

Like its Broadway predecessor, Higher and Higher suffers from a rather thin script.  But it features a group of fine comic actors and performers, able to inject life into it.  These include:

– Leon Errol, a former Broadway actor and director, best remembered in films for the “Mexican Spitfire” series opposite Lupe Velez.

– Blunt, lanky comedienne Mary Wickes, a Broadway veteran, and a great favourite of George S. Kaufman’s.  She was immediately in great demand in Hollywood after her feature debut in The Man Who Came to Dinner (1942), and remained so for the rest of her long life.  This was her eleventh film in just one year.

– Lovely Barbara Hale, years before she became familiar on ’50s TV as Perry Mason’s Della Street.  Hale became known industry-wide for her screams; her co-star Raymond Burr proudly claimed “She has the best shriek in Hollywood.”

-“Velvet Fog” Mel Torme, who made his movie debut in Higher and Higher, at 18.

– Comic Dane Victor Borge, who made his American film debut in the film.

– Dooley Wilson, familiar as “Sam” from 1942’s Casablanca, who plays the chauffeur.