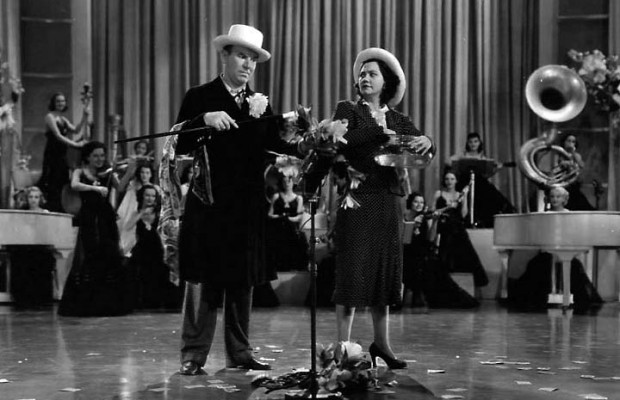 It was major news in 1935 when three-times-married John Barrymore began a whirlwind affair with an adoring, attractive brunette co-ed, Elaine Barrie.  They met when she wrote him

a fan letter while he was in hospital.  Elaine was 19, he was 53, and his divorce from Dolores Costello had not yet been finalized.  The  couple went to nightclubs, theatres and parties all over New York with the press in hot pursuit.  The Associated Press even dubbed Elaine (along with presidential candidate Alf Landon) one of 1935’s Most Interesting People.  After numerous wild press pursuits–including a cross country one, with the couple travelling by train, followed by reporters making hops in airplanes–they married in 1936.  At its peak, theirs was quite the romance.  As Elaine later recalled, “He made me unashamed of the natural.  He made me glory in my sensuality.  My head still whirls from the memories.”  But theirs was a stormy marriage, doomed by his womanizing and the heavy drinking that killed him (at 60) only two years after their 1940 divorce. Elaine was his only 3x-wife to attend the funeral, and she never remarried.

The madcap aspects of the Barrymore love story inspired much of Sing, Baby, Sing.  Darryl Zanuck, head of 20th Century-Fox, saw an opportunity to profitably spoof this “Torn  from the headlines!” romance.  The writers grafted some similar incidents and characters into a cute little musical about a struggling singer and her friends.  That oversized “no resemblance to actual persons living or dead” disclaimer seen before the movie was hooey, and savvy contemporary audiences were in on the joke.  Best of all, from Zanuck’s perspective, was that much of the publicity had already been handled by the press, at no cost to the studio.  Adolphe Menjou cleverly played a “Barrymore type.”  Fan favourite Alice Faye was cast as the leading lady (who, it should be noted, bore no resemblance at all to Elaine Barrie).  If Barrymore had any objections to all of this, he kept them quiet.  He had a self-deprecating sense of humour, and may not have minded at all.

One of the film’s flaws is the costumes, which author W. Franklyn Mosher compared to “nothing more than pick-me-ups from a bargain basement.”  That baby-doll dress Alice wears

while singing the title tune really is unforgivable, and the rest aren’t much better.  Many Alice Faye fans consider this her worst film wardrobe ever.  Alice herself did not disagree: “The costumes I was squeezed into were dismissed by one critic as ‘atrocious,’ and I think he was kind,” she later commented.  Happily, the success of Sing, Baby, Sing won her a much better studio contract, and she was never indifferently costumed again.

Clunky wardrobe aside, this movie marked a major turning point for 21-year-old ALICE FAYE, who earned her best reviews to date.  She recalled this “was the first picture in which I got good notices from the critics, and it was the first time that I really felt I’d made good in the movies.  Up to then, I’d been neither fish nor fowl.”  She sported a new, softer look that caught on with audiences and critics alike.  Gone was the dramatic platinum blonde hair she had sported since her film debut in 1934, with pencil-thin eyebrows and vivid red lipstick (much like Jean Harlow, though Alice later said she’d actually been aiming to look like Marlene Dietrich).  That look was originally devised by her old boss, bandleader Rudy Vallee, who wanted something that would look good on the bandstand and attract the audience’s attention.  In Faye’s previous film, the 1936 Shirley Temple charmer Poor Little Rich Girl, she had reverted to her own natural reddish blonde hair colour (dubbed “Amber Blonde” by studio publicists), though she still had the thin eyebrows. Sing, Baby, Sing saw her eyebrows revert back to their natural state, and they remained that way for the rest of her life.  She later said she was glad she changed her appearance when she did, in light of Harlow’s untimely death in 1937.

Did You Leave Heaven?”  Romance blossomed, though he had concerns about their religious differences.  He was born Alvin Morris in San Francisco, the son of Jewish immigrants from Poland, while Alice was an Irish-German Episcopalian from New York City.  Tony consulted George Burns, a Jew happily married to Roman Catholic Gracie Allen, for advice on how to make it work.  It runs out Tony needn’t have worried.  In short time, the marriage was in jeopardy–but due to his infidelities while on the road with his band, not religion.  The attractive couple co-starred in the popular musicals You Can’t Have Everything (1937) and Sally, Irene and Mary (1938) before their divorce in 1941.  They handled the split with dignity and there was no public finger-pointing.  Tony did later comment that, “To many people around town, I was Mr. Alice Faye.”  To their credit, both Alice and Tony had very successful, long-lasting second marriages–hers of 54 years to Phil Harris, and his of 60 years to Cyd Charisse.

The second important person Alice met was studio newcomer Tyrone Power, Jr.  She helped feed him lines for his screen test, and he won the role of reporter Ted Balke in Sing, Baby, Sing.  The two were delighted to find they shared the same birthday–May 5–and quickly became close friends.  But director Sidney Lanfield took a dislike to Power, and had him replaced in his debut role by Michael Whalen–at the time a bigger name–two weeks after production began.  The flimsy excuse given was that Power’s shoes made too much noise on the soundstage floor!  Power was devastated when he was fired in front of the entire

crew, and Faye was furious.  She immediately invited him out to dinner, also in front of the entire crew.  That night, over Chinese-Polynesian fare at the popular nightspot Sugie’s Tropics, she urged him not to let this setback get him down.  Her faith in him was not misplaced; not only did he become a major star, but Faye’s subsequent three films with Power were the most successful of her career.

After making a wildly successful starring debut soon after in Lloyds of London, Power told suddenly-avid interviewers his favourite song was “Sing Baby Sing”.  In part, this was studio loyalty, plugging a popular song from a recent Fox film.  But it also ensured that, for many years, whenever Power entered a nightclub, the band would swing into the tune as a tribute–and he’d be reminded of the job he lost back in the early days.  It was a sure way to keep from getting a swelled head.  It was also a reminder of the friend who stuck by him when he needed it.  In 1939, at a party celebrating his success, Power announced, “I’ve got one person to thank for where I am today, and that’s Alice Faye.”  Throughout her long life, Alice was often asked what it was like to kiss Tyrone Power, and usually responded, “He was the best looking thing I’ve ever seen in my life.  Kissing him was like dying and going to heaven.”

Zanuck, a mercurial dynamo who ran his studio like a dictator, usually had good instincts for filmmaking.  But he occasionally went briefly overboard with enthusiasm for performers he discovered.   The budding careers of such actresses as Simone Simon, Arleen Whelan and Annabella were hampered by too much of his ballyhoo and build-up.  Here, Zanuck’s new favourites the RITZ BROTHERS (his “answer” to MGM’s Marx Brothers) made their feature film debut.  They were allowed to run riot throughout the film.  In the process, they performed nearly all the material from their stage act.  This delighted their fans, but wore out their welcome with others.  In hindsight, some restraint might have proved beneficial.

The brothers were not triplets, but they sure looked like it.  Publicists didn’t even bother trying to tell them apart; publicity photos usually identify each merely as “a Ritz Brother”.  The

trio started out as a dance act, emphasizing precision dancing, and added comedy material as they went along.  By the early 1930s they were headliners in vaudeville.  Folllowing a successful 1934 short, Hotel Anchovy, they were signed by 20th Century-Fox and appeared in several feature films.  Their zany humour won a large following, and they were often compared to the Marx Brothers.  However, the Marxes always played contrasting characters.  In the Ritz act they behaved identically, making it hard for audiences to tell them apart.  Their ringleader was rubber-faced, mothy Harry, with Jimmy and Al enthusiastically following along.  They frequently broke into raucous songs and dances, and also did celebrity impersonations (including Peter Lorre, Tony Martin, Alice Faye and Katharine Hepburn).  Their most successful film was Fox’s 1939 musical-comedy version of The Three Musketeers, co-starring Don Ameche.  Later that year, the Ritzes staged a highly publicized walkout, complaining about the low quality of their latest script (The Gorilla, which really was a dog). The studio released The Gorilla anyway, and the Ritzes were out of favour (and “A” movies) from the on.  After making the “B” picture, Pack Up Your Troubles, starring Jane Withers, the Ritz Brothers left Fox for good in 1939.  They moved to low-budget Universal, where they made a handful of minor comedies before going back to work on stage.