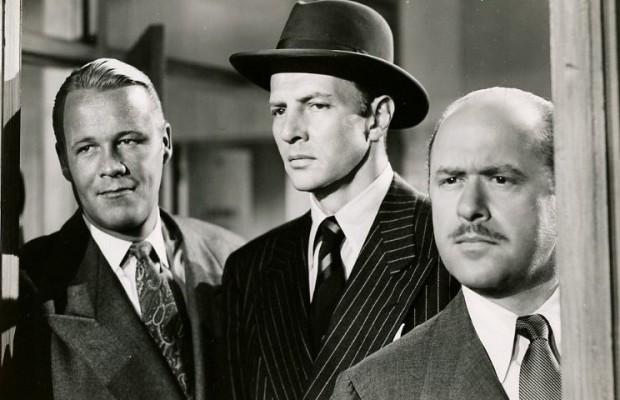 Toronto Film Society presented The House Across the Street (1949) on Monday, July 28, 2014 in a double bill with Front Page Woman as part of the Season 67 Summer Series, Programme 4.

Dave Joslin, the managing editor of a big-city newspaper, is demoted and moved to the Miss Lonely Hearts column-writing department by the newspaper’s publisher, J. B. Grennell, because Joslin refuses to desist in printing stories linking a gangster, Matthew Keever, to a murder. But Joslin, aided by Kit Williams, a newspaper woman with whom he is in love, investigate the murder case on their own time and, after several narrow escapes from death, finally solve it.

Wayne Morris was born Bert DeWayne Morris, Jr. on February 17, 1914 in Los Angeles, California. After graduating from Los Angeles High School he matriculated in acting at Los Angeles Junior College before receiving a scholarship to attend the Pasadena Playhouse.  Morris soon won a Warner Bros.’ contract and was cast in the title role in the Bette Davis

picture Kid Galahad (1937), an A-list boxing movie that co-starred Humphrey Bogart. Also that year, Morris was cast in his first Western, Beyond the Law (1934) as the second lead.  The year 1939 was a crucial one for Morris, as Warners did not pick up his contract. He had initially appeared in support of his Kid Galahad (1937) co-star Humphrey Bogart in the infamous stinker The Return of Doctor X (1939), with Bogart in the title role, which the soon-to-be great star Bogie categorized as the worst role he ever played. In 1941, Warner Brothers cast Morris in his second Western, playing Cole Younger’s younger brother Bob in Bad Men of Missouri (1941). Although Westerns would prove to be the genre that made his career, the movies would have to wait: Morris had been commissioned a reserve officer in the U.S. Navy.  After the war Morris returned to Warner Brothers, but the studio didn’t use him much and when it did it was on load-out to 20th Century-Fox.  In December 1952, Morris was cast by Republic’s Allied Artists subsidiary in his first, and ironically, his last B-Western series, starting with Star of Texas (1953). Five more pictures followed the initial film: The Marksman (1953), The Fighting Lawman (1953), Texas Bad Man (1953), The Desperado (1954), and Two Guns and a Badge (1954). In the latter part of his career Morris began steady work in TV Westerns and shot a pilot for a proposed Western TV series, New Comedy Showcase: They Went Thataway (1960). His new TV career was cut short when he died unexpectedly of a heart attack at the age of 45 on September 14, 1959.

This joyous scene-stealer started out playing rather bland film ingénues, but never seemed to be comfortable in those roles–she had too much snap, crackle and pop to be confined in such a formulaic way. Born in 1922 in Tacoma, Washington, Janis Paige was singing in public from age 5 in local amateur shows. She moved to Los Angeles after graduating from high school and earned a job as a

singer at the Hollywood Canteen during the war years. The Canteen, which was a studio-sponsored gathering spot for servicemen, is where she was spotted by a Warner Brothers talent scout, who saw potential in her and signed her up. She began co-starring in secondary musicals that often paired her with either Dennis Morgan or Jack Carson. Later she was relegated to rugged adventures and dramas that just seemed out of her element. Following her role in the forgettable Two Gals and a Guy (1951), she decided to leave the Hollywood scene. She took to the Broadway boards and scored a huge hit with the 1951 comedy-mystery play “Remains to Be Seen“, co-starring Jackie Cooper. She also toured successfully as a cabaret singer, performing everywhere from New York to Miami to Las Vegas to Los Angeles. Definitive stardom came in 1954 with the feisty role of Babe in Broadway’s “The Pajama Game” opposite John Raitt. Her old Warner Bros. rival Doris Day, however, was a bigger name and went on to play the role on film (The Pajama Game (1957)) with Raitt. After a six-year hiatus, Janis returned to films in tongue-and-cheek support, all but stealing Silk Stockings (1957) from co-stars Fred Astaire and Cyd Charisse. She then grabbed her share of laughs in a flashy role with the comedy Please Don’t Eat the Daisies (1960) opposite Ms. Day. Janis ventured on in summer stock, playing such indomitable roles as Annie Oakley in “Annie Get Your Gun“, Margo Channing in “Applause“, Mama Rose in “Gypsy” and Adelaide in “Guys and Dolls“. From the mid-’50s on, Janis also tapped into TV with such series like It’s Always Jan (1955), Lanigan’s Rabbi (1976) and Trapper John, M.D. (1979). In the 1990s, among other TV appearances, she had recurring roles on the daytime serials General Hospital (1963) and Santa Barbara (1984). Married three times, she was the widow of Disney composer Ray Gilbert, who wrote the classic children’s song “Zip-a-Dee-Doo-Dah.”