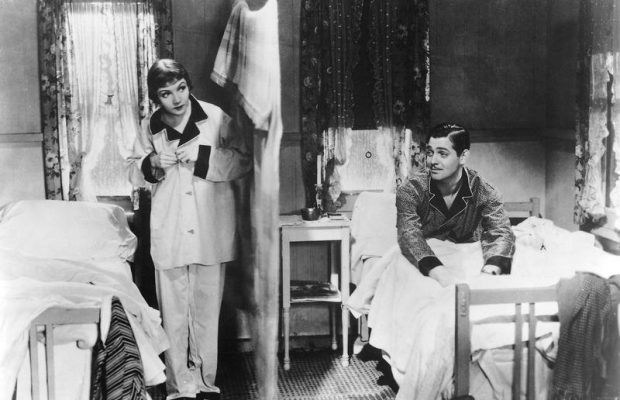 Toronto Film Society presented It Happened One Night (1934) on Monday, July 31, 1967 as part of the Season 19 Summer Series “Thirties to Forties”, Programme 1.

Robert Benchley’s lectures were one of the glories of comedy.  Those of you who were members of the 1966 Summer Series will remember his The Sex Life of the Polyp (1928).  Here is a much later example, but the Benchley style had not changed much over the years.  While no credits are available, it is almost certain that the script would be by Benchley himself, and he stars as both the lecturer and the “horrible example”.

The WB cartoons were one of the most important (and delightful) forms of short comedy from the ’40’s on.  From our modest festival of four of them in 1966, we expand to six this summer.  I Was a Teenage Thumb is the most recent of the six and does not utilize any of the famous characters.  It illustrates the less-realistic style of animation that Chuck Jones was favouring by 1963 for the cartoons he directed, as well as illustrating his high imagination.

In another time than our own, non-commercial sex was hard to come by.  Those who found it relatively easy to acquire–runaway heiresses and frenetic reporters–tended to practise self-denial whenever possible.

We fade to a dated motor court and the interior of a decadent bungalow.  The reporter tribe (symbolized by sly, good-hearted Clark Gable) and the runaway heiress tribe (symbolized by witty, lovely Claudette Colbert) lie in their own single beds separated by self-denial in the form of two blankets folded over a rope strung to either wall.  This structure has been named the Walls of Jericho and, like the walls of our ancient tribal pasts, it comes tumbling down.  Rather, it is pulled down by the two deniers.

You can hardly fail to see their plight.  They’ve spent days of denial in each other’s company, traversing the USA by bus and thumb, mingling with the natives.  In the course of this journey, the two have demonstrated that the male thumb (even Gable’s), however dedicated, is a shabbier hitch-hike instrumentality than the female thigh (if it’s Colbert’s).  So be it.  Colbert and Gable are picked up and the deniers deny their saviour his rightful reward.  That’s how it is when sex is hard to come by.

Thus, the motor court.  Thus, the Walls of Jericho (only one bungalow is available and the two must pose as man and wife to get it).  And thus, inadvertent sex (that is what happened that night) thanks to Frank Capra, the Hollywood ambience, the depression and the indecent innocence of the recent past.

It’s a good old movie.  You’ll like the principals.  Oscars went to the film, Capra, Gable and Colbert.