Mrs. Parkington is the fourth of Greer Garson and Walter Pidgeon’s eight co-starring vehicles.  As a result of the enormous success of their three earlier pairings (Blossoms in the Dust, Mrs. Miniver, and Madame Curie), M-G-M provided a spectacular budget for this adaptation of a popular Louis Bromfield novel.

The novel, a sprawling saga of several generations of a large and wealthy family, seems at times like all 16 volumes of Mazo de la Roche’s Jalna condensed into one.  While the film is a two-hour condensation of this volume, its pace is leisurely, and the audience has ample opportunity to admire Tay Garnett’s slick direction, Joseph Ruttenberg’s first-class camera work, and the lavish M-G-M sets.

The film tells the tale of this clan through a series of flashbacks from the point of view of Garson, the 84-year old matriarch.  We learn, then, through these flashbacks, of the matriarch’s evolution from her origins as an orphaned daughter of a boarding-house keeper in a Nevada mining-town, through the years when she and her good-hearted scoundrel of a husband try to crash the social set in nineteenth-century New York, to their final elegant life-style where they hobnob with duchesses and the like.  One would be very heartless indeed if one were to ask such basic questions as how this frontier girl instantly took on the charm, breeding, and dignified poise of a Greer Garson, or how her patience, loyalty and goodness could remain so constant when married to such a stubborn, violent and faithless cad.  The audience is meant merely to bask in such 1940s truisms as “Behind every Empire-builder, there is a strong, good woman.”  And indeed, the audiences of 1944 flocked to the film to do just that. 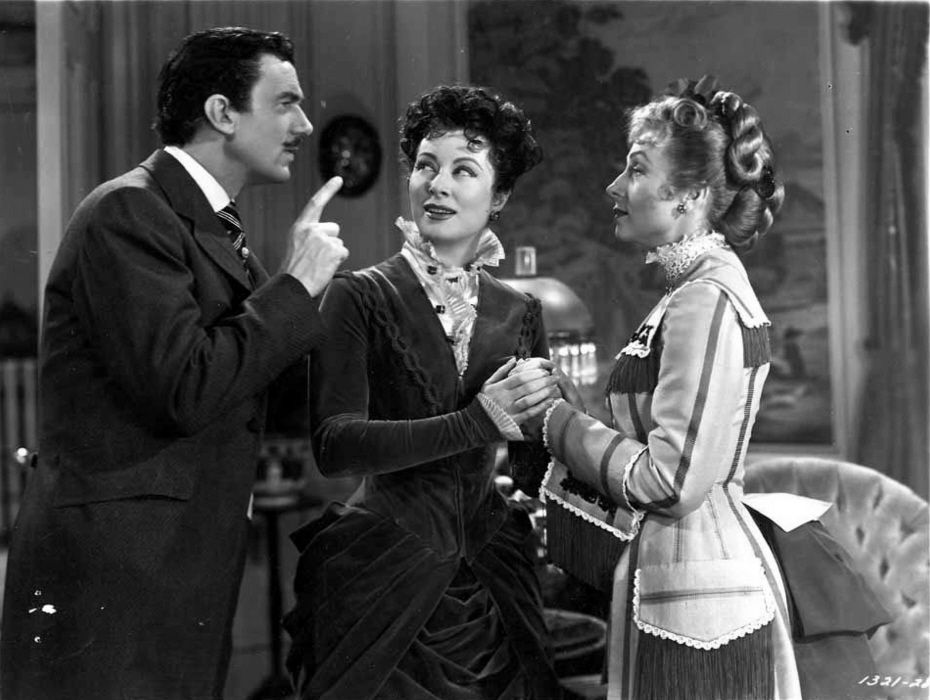 Mrs. Parkington earned Garson her fifth Academy Award nomination in almost as many years.  The next year, in another Tay Garnett-directed film, The Valley of Decision with Gregory Peck, she would again be so honoured.  But her future films with Pidgeon would be less acclaimed (Julia Misbehaves, That Forste Woman, The Miniver Story, and Scandal at Scourie).  It would be only in 1960 with her role as Eleanor Roosevelt in Sunrise at Compobello, that she would again be among the Oscar contenders.

Miss Garson’s grooming and good manners became so much an icon of the 1940s that she was almost as important to the studio’s public image as Leo the Lion himself.  From the vantage-point of 1984, the most appalling aspect of the Greer Garson phenomenon was that it encouraged Louis B. Mayer to subdue to the wondrous comic talent of Irene Dunne into a dignified Garson clone in films like The White Cliffs of Dover and A Guy Named Joe.  (It was the same yen for breeding that made Mayer steal the witty Jeanette Macdonald from Paramount and Maurice Chevalier to turn her into the often uninteresting plastic partner of Nelson Eddy in the 1930s).

As for the late Walter Pidgeon, in his obituaries this autumn, the newspapers quite naturally recalled this Canadian -born actor’s role as Queen Greer’s consort.  This whole Garson-Pidgeon corpus tends collectively to overshadow his fine work in such other films as How Green Was My Valley, Command Decision, Advise and Consent, and Funny Girl.

The cast credits for Mrs. Parkington read like a Who’s Who of the M-G-M supporting player stable.  As excellent as each performer is in this film, it would be in other films that each one would achieve a reasonable facsimile of unabashed immortality: Edward Arnold as the capitalistic bigot in Easy Living and You Can’t Take It With You, Agnes Moorehead as Aunt Fanny in The Magnificent Ambersons, Cecil Kellaway as the leprechaun in The Luck of the Irish, Gladys Cooper as the repressive mother in Separate Tables, Tom Drake as the boy next door in Meet Me in St. Louis, Dan Duryea as the uncouth lower-boy in The Woman in the Window and Scarlet Street, and Hugh Marlowe as the playwright in All About Eve.

And even blessed with a cast like this, Mrs. Parkington still belongs to its stars!