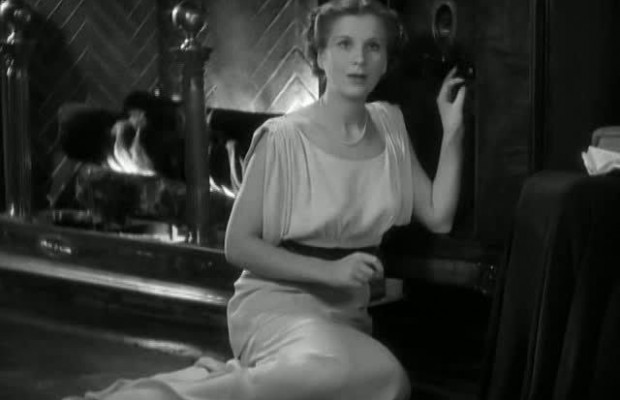 Toronto Film Society presented One More River (1934) on Monday, April 12, 1976 in a double bill with The Prisoner of Shark Island as part of the Season 28 Monday Evening Film Buff Series, Programme 7.

“One More River is quite possibly (and in my view almost certainly) James Whale’s masterpiece.  It is less known than many, certainly not a bravura work, and possibly less ‘entertaining’ than his best horror films.  And I admit to some British prejudice in that it is so thoroughly ‘right’ in detail and milieu that it is by far Hollywood’s most successful attempt at putting any suspect of England on the screen, not even excepting Cavalcade.  But given all that, it represents the fullest flowering of Whale’s unique, richly theatrical yet wholly cinematic style.  At the same time it shows such a disciplined application of that style that its technique is almost hidden, as of course all good technique should be.  Such Whale films as The Old Dark House and The Bride of Frankenstein (the latter not unreasonably considered by many to be his piece-de-resistance), while they couldn’t have been improved on by other directors, were so full of good basic material and solid actors that even a hack director couldn’t have helped but make a creditable job of them.  But I can’t think of any other director combining the necessary ability, tste and personal background so necessary to One More River, and so responsible for its success….

In a very loose sense, One More River is about a period of social change in Britain, and can join those novels and films (La Grande Illusion, Gone With the Wind and particularly a ’37 British film, Victor Saville’s South Riding) which are historically and sociologically valuable as reflections of an era.  One More River was written and filmed early in the 30s, when there was as yet no perspective on that change, and thus it is more of a mirror of the times than the other three films, which in varying degrees were reconstructions of them.  What makes it especially valuable however, is its unerring accuracy of milieu, detail and people.  England in the thirties was full of people, albeit elderly ones, who remembered the Victorian era with affection, and resented change.  The Femms in The Old Dark House were extremes, but not unrelated to the elderly couple here who refuse to vote because there’s been nobody worth voting for since Gladstone died.  Apart from one or two ‘types’, kept to the background, for the people in One More River are very real, and far less theatrical in their treatment than most of Whale’s screen characters….

The film works on so many levels–as film, as a Whale film, as translated Galsworthy, as social comment–that it could be used beneficially by virtually any class using film.  And it would be (and has been) a positive delight for acting students, not only for the performances themselves, but for the way they are handled by Whale.  And what a pleasure to hear good dialogue flawlessly spoken in this era of uninhibited ‘naturalism’.  Apart from its value to all kinds of film students, it is (and this of course is the most important aspect of all, since without it the other things don’t matter0 still a fine pictorially stunning, and entertaining film.  It’s admittedly rough for films like this to attract a large audience now–but if audiences could be lured into the Radio City Music Hall today (and that’s where it opened in August of ’34) they’d find it survives superbly well, more than capable of holding its own with any contemporary film.  This, incidentally, was proven by two showings over the past few years at NY’s New School, where audiences, knowing nothing about the film in advance, were quite bowled over by it.  In courses in film history and film aesthetics, there seems no reason for including a film like One More River, a film with no reputation and a director still not taken too seriously.  But it’s jut such films as this that can revitalize such courses and prevent them from becoming stale.  Perhaps more than any other film currently available, it deserves ‘Rediscovery’.”