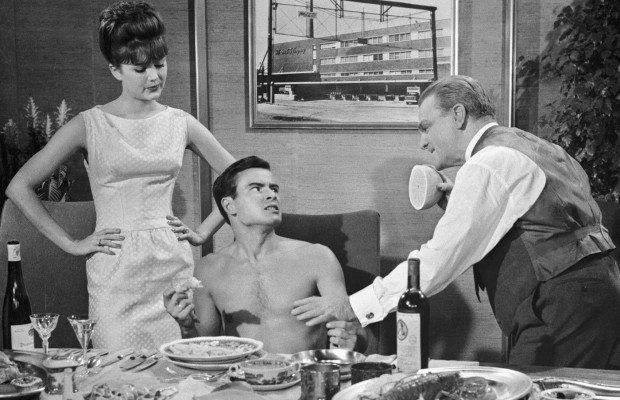 What is there left to follow Casablanca?  The film received a spurt of fortuitous publicity from being released at the time of the Casablanca conference of the Big Three, coasted along for fifteen years, became a cultist movie after the death and transfiguration of the Bogartian hero, has survived such masturbatory fantasies as Woody Allen’s unmentionable little film, and now seems firmly established as a great popular masterpiece in which so many American movie-made myths came happily together.

Billy Wilder’s One, Two, Three may well be one of the few films capable of keeping an audience in the theatre for more (more or less) of the same.  Here is another film in which several movie-made myths are (more consciously) brought together: Cagney’s previous roles, the divisions between American North and South, the ultimate machine-gun bursts of the Wilderian wisecracking style.  The plot, moreover, concerns an American entrepreneur in a foreign country, a nominal neutral caught between warring factions representing east and west, whom we last see, ambiguously, at an airport, en route to a new life.  But there are

similarities between Rick Blaine and C.R. MacNamara must cease: Rick is welcomed back to the fight by Victor Laszlo, Mac goes back to the States, disentangling himself from the Old World; Rick has sold his bar and its liquor to Ferrari, Mac still has the interests of Coca-Cola (over Pepsi) very much at heart.  the Nazis of Casablanca are formidable antagonists, the (former) Nazis of One, Two, Three are purely comic figures, washroom attendants or inadvertent transvestites.  The underground of Casablanca is heroic, the underground of One, Two, Three is Schlemmer’s “subway.”  Rick is a knight who does chivalrous service to Ilsa in Paris, and effaces himself before Laszlo’s higher claim, Mac is a mere shepherd, a forced guardian to the boss’s daughter on her foreign tour.  At the end, Rick, like all the great American heroes, gives up his own true love to walk, with his comrade, into the distant dusk.  Mac, like many another American hero, is going back to home and hearth, in Phyllis’s leading strings.  The difference is between a serious, patriotic treatment, and a comic, nihilist one (Wilder, Andrew Sarris once

complained, “is too cynical to believe even his own cynicism”).  And the ultimate difference is between a film of 1942, within a year of Pearl Harbor, and a film of 1961, the year of the Berlin Wall.  Set values versus confused values.  The ceremony of the Marseillaise versus the ceremony of the office staff rising as Herr MacNamara enters the room.

But a more direct and pertinent connection between One, Two, Three and a film of the Second World War is with Ernst Lubitsch’s Ninotchka.  Much of Wilder’s early work as a screenwriter had been with his legendary fellow German director, and he had a part in the writing of Ninotchka, whose star–“Garbo laughs!–was as much an icon in 1939 as Cagney would be in 1961.  Around her, Lubitsch (and Wilder) constructed a fable of east-west conflict between Communism and Capitalism.  These polarities survive into One, Two, Three, but with a more acerbic bite, reminding us more forcibly of the stupidities of communist isolation (“Totally unacceptable!  Full of holes!”) and, no less, of capitalist self-involved, automatic reation (“Vivisection?  It shouldn’t happen to a dog!”).  Garbo’s three comic commisars return, but a still gay paris has become a divided Berlin.

One, Two, Three is the last work of Wilder’s greatest comic period.  Following on the two masterpieces which transformed workaday stage plays into comic gems (Sabrina and The Seven-Year Itch), and the two original masterpieces (Some Lie It Hot and The Apartment), One, Two, Three temporarily reverses the trend towards deepening bitterness in Wilder’s work, and is a much more optimistic work than A Foreign Affair (1948), in which he had also returned to his native Germany.  But it is the last great flash before the self-indulgent darkness of Kiss Me Stupid, The Fortune Cookie, and even of The Private Life of Sherlock Holmes.  In One, Two, Three the wisecrack becomes an end in itself, a living thing that profitably feeds on itself (the reprise of the “fullof holes” joke, or the mindless repetition of Hazeltine’s time-worn prejudices by his son-in-law Piffl).  Nor are the wisecracks merely verbal: the classic visual wisecrack must surely be Cagney’s motion towards the grapefruit as the Mae Clarke of The Public Enemy momentarily dissolves into Horst Bucholtz.  It is this quality in Wilder, with his

frequent references to film history (“Put your pants on, Spartacus!”) which makes him one of the most allusive filmmakers before the current class of academic directors like Bogdanovich or Coppola.
One final parallel between this afternoon’s films may be noted.  Casablanca was originally to have starred not Bogart and Bergman, but Ronald Reagan and Ann Sheridan.  One, Two, Three, originally entitled A Day at the United Nations, was to have starred the Marx Brothers.  These two unrealized projects must stand high on everybody’s list of unfilmed favourites.
Notes by Barrie Hayne
Related ItemsArlene FrancisBilly WilderHorst BucholtzJames CagneyOne Two Three (1961)Pamela TiffinSeason 33Sunday Buffs 33
←Previous Tunes of Glory (1960)
Next → Beau Brummell (1954)