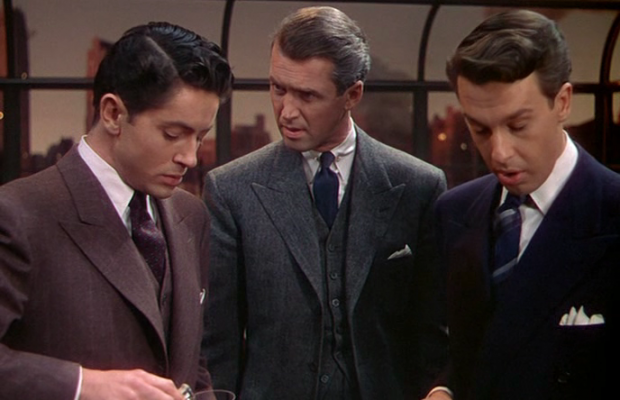 Toronto Film Society presented Rope (1948) on Sunday, January 19, 2020 in a double bill with The Trouble With Harry as part of the Season 72 Sunday Afternoon Film Buffs Series, Programme 4.

Whatever audiences thought of Rope, then or now, Alfred Hitchcock believed in it. “…[U]ntil Rope came along, I had been unable to give full rein to my notion that a camera could photograph one complete reel at a time, gobbling up 11 pages of dialogue on each shot, devouring action like a giant steam shovel,” he said.[1] The process of making the film, his first in colour, the first under the banner of his new production company, Transatlantic Pictures, had left him bombastic. Indeed, no discussion of Rope’s merits, or flaws, is more interesting than a simple description of how it was made. It’s what you would mention first, were you to recommend it to someone else. “It’s based on a play, but it’s structured like one too,” you’d begin. “It’s shot almost in real time, and the cuts are disguised—zooms into the back of a suit jacket, for example, then out again—so you feel like there are no breaks in action. You’ve never seen anything like it.”

The source material, a British play first performed in 1929, is based loosely, and unofficially, on a real-life murder case. Its plot concerns two private school twentysomethings, Brandon and Phillip, who lure one of their classmates to their apartment, murder him, and hide his body in an old chest in the living room. A dinner party follows, with the chest and its gruesome cargo dead centre, hidden beneath platters of food. The arrival of the boy’s old housemaster, Rupert Cadell, provides the young men with a challenge, as he knows them well and has a keen eye for detail. This is a classic Hitchcock premise. But the director’s decision to shoot it the way he did caused headaches, even for James Stewart, who was made so tense by the unorthodox camerawork that he couldn’t sleep nights. Hitchcock recalled: “To shoot Rope with stage technique under sound stage conditions but with continuous action called for months of preparation and days of exacting rehearsals. Every movement of the camera and the actors was worked out first in sessions with a blackboard—like football skull practice. Even the door was marked and plotted with numbered circles for the 25 to 30 camera moves in each reel. Whole walls of the apartment had to slide away to allow the camera to follow the actors through narrow doors, then swing back noiselessly to show a solid room…. [It was] designed to roll through everything like a juggernaut.”[1] 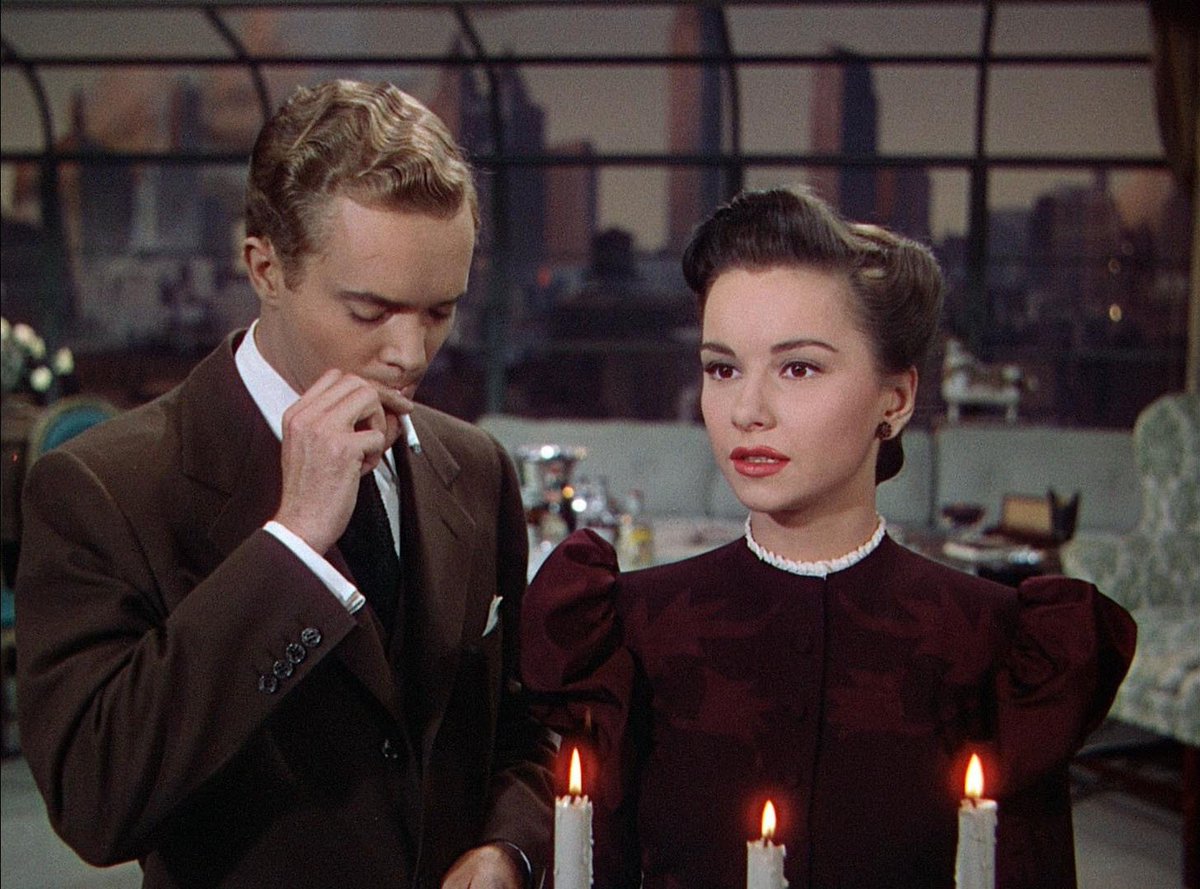 The screenplay was challenging too. It began as a treatment, prepared by Hitchcock and Hume Cronyn[2], with the adaptation handled by Arthur Laurents, who was tasked both with Americanizing a very British play and sublimating, where possible, its obvious gay subtext. These problems were sometimes related. In “Rope Unleashed” (2001), Laurents described the struggles they had with the phrase “my dear boy”, a more loaded term in American English than the British variety: “Every ‘my dear boy’ was marked in big blue pencil: ‘Homosexual! Out! Out! Out!’ So it had to be cleaned up from all those English remarks, which had nothing to do with anything really.”[3] Yet the camera sometimes said what the characters could not. Hitchcock often filmed Brandon and Phillip standing closer to one another than platonic friendship would demand, and Phillip’s dialogue at times recalls that of a regretful mid-century wife. Brandon stands awfully close to Rupert too, and while Stewart surely had the least homoerotic persona of any star Hitchcock could’ve cast, the simple fact that he does not move away is suggestive. The set, too, subverts. The young men’s apartment is adorned with Roman column wallpaper, which seems symbolic, at least, of their pseudo-intellectualism, and perhaps something else. Something could be made of Brandon lighting the wrong end of a candle, too. Amy Lawrence writes, “Rope can easily be seen as a saga of the closet where action equals identity (where what you do in private becomes who you “are”) and where the evidence of what Brandon and Phillip have done is smack in the middle of the room.”[2]

In a directorial canon that includes some of the greatest films ever made, Rope sits comfortably in the middle. There are no acting tours de force to be found in it, though there are likewise no duds. Thematically it is familiar Hitchcockian terrain. But the techniques the director used make it special, and anyone who loves film ought to see it. As Robin Wood once wrote: “Some said, absurdly, that it was mere filmed theater. On the contrary, it is one of the most cinematic of films, carrying one of the defining characteristics of the medium—its ability to use the camera as the eye of the spectator—to its ultimate conclusion.”[5]

Rope’s tiny cast is devoid of Canadians, but a mighty big one (metaphorically speaking—he was only 5’6”) loomed behind the scenes. Hume Cronyn, born July 18, 1911 in London, Ontario, adapted the screenplay, alongside writing superstars Arthur Laurents and Ben Hecht, from the play by Patrick Hamilton. It wasn’t the first or the last time Cronyn worked with Alfred Hitchcock. In addition to co-writing screenplays for both Rope (1948) and Under Capricorn (1949), Cronyn’s debut film performance was in Shadow of a Doubt (1943). He later appeared in Lifeboat (1944) and even a handful of Alfred Hitchcock Presents TV shows during the late-1950s.

The much-lauded actor/writer/director/producer descended from an even more prominent Canadian family. His great-grandfather, the Right Reverend Benjamin Cronyn, was the first bishop of the Anglican diocese of Huron and founded Huron College, which later grew into the University of Western Ontario. His great-uncle, Benjamin Jr, was an early mayor of London, Ontario. His father, Hume Blake Cronyn, enlisted in The Queen’s Own Rifles of Canada and served during the North-West Rebellion of 1885, fighting in the Battle of Cut Knife, before heading back to the University of Toronto to finish his law degree. Around that time, he married Frances Amelia Labatt, second daughter of brewing magnate John Labatt. The couple would go on to have three sons and two daughters. Cronyn Sr enjoyed a successful business career and was even elected for a short time to the House of Commons in 1917. After his death, his widow endowed the Hume Cronyn Memorial Observatory at The University of Western Ontario and an asteroid, (12050) Humecronyn, was named in his honour. Hume Cronyn Jr could also boast of some famous first cousins—Canadian-British artist Hugh Verschoyle Cronyn, actor Graham Jarvis (once removed), and theatre producer Robert Whitehead, born March 3, 1916 in Montreal, Quebec. Whitehead, winner of five Tony awards as well as a special Tony for his lifetime contribution to the theatre, is considered one of the 20th Century’s most prominent producers. His own film work includes Summertime (1955), The Fugitive Kind (1960), and The Prime of Miss Jame Brodie (1969). He was married from 1968 until his death in 2002 to actress Zoe Caldwell.

Back to Cronyn Jr’s early days: As was typical then, he was educated at boarding schools, first at Elmwood School in Ottawa (known at the time as Rockliffe Preparatory School) and later at St. Catharines’ Ridley College. He developed an early passion for boxing and was nominated as a featherweight for Canada’s 1932 Olympic team. Denied that berth, Cronyn went on to study pre-law at McGill University in Montreal. While there, he began acting with the Montreal Repertory Company and decided to switch his major to drama. After graduation, Cronyn studied under Max Reinhardt at the American Academy of Dramatic Arts in New York. He made his Broadway debut in 1934 and went on to work steadily from there, supplementing his acting income by writing, including articles for Maclean’s magazine. Later that same year, he married American philanthropist and former Olympic athlete Emily Woodruff. The couple never lived together—their “lavender marriage” was meant to disguise Woodruff’s lesbianism and the couple quietly divorced little more than a year later. Cronyn met his true life-partner, American actress Jessica Tandy, in 1940. They married in 1942 and together shared a memorable stage, film, and TV career until her death in 1994, aged 85, from ovarian cancer. Cronyn himself battled cancer—little known by fans was the fact that he lost an eye to optic cancer in 1969. In 1996, he married author/playwright Susan Cooper. His own death, from prostate cancer, occurred in 2003, just one month shy of his 92nd birthday.

Cronyn and Tandy partnered on-screen in 13 movies between 1944 and 1994, usually playing a couple. Their films include The Seventh Cross (1944)—for which Cronyn received a Best Supporting Actor Oscar nomination, The Green Years (1946), The Moon and Sixpence (1959), Honky Tonk Freeway (1981), The World According to Garp (1982), Cocoon (1985), Foxfire (1987), and Camilla (1994). On his own, Cronyn appeared in such major movies as Ziegfeld Follies (1945), The Postman Always Rings Twice (1946), People Will Talk (1951), Sunrise at Campobello (1960), The Arrangement (1970), and The Parallax View (1974). But for the most part he considered himself a stage actor, willing to forego character actor film roles for theatre’s meatier matter. Together with Tandy, Cronyn moved between Broadway, regional theatres, Minneapolis’s Tyrone Guthrie Theatre, and the Stratford Festival in Stratford, Ontario, where Cronyn was also a member of its board of governors.

Cronyn’s abilities were much celebrated during his long, illustrious career. He won two Tony awards (one a Lifetime Achievement award shared with Tandy) and was nominated six other times, both as an actor and producer. He also won an Obie, an Emmy, two Los Angeles Drama Critics Circle Awards, and a Drama Desk Special Award. He and Tandy jointly received Kennedy Center Honors in 1986. “The First Couple of the American Theatre” were honoured as well in 1990 with the American National Medal of the Arts from the National Endowment of the Arts in Washington, DC. Cronyn, who retained his Canadian citizenship, was the first Canadian to be so honoured. Home-grown tributes include an Honourary Doctor of Laws degree from the University of Western Ontario, Officer of the Order of Canada, a star on Canada’s Walk of Fame, the 125th Anniversary of the Confederation of Canada Medal, and the Queen Elizabeth II Golden Jubilee Medal. In 1988, he established the Hume Cronyn Scholarship at his acting alma mater, the American Academy of Dramatic Art. The scholarship was designated specifically for Canadian students, who make up about 10% of the school’s enrolment.

Also in the cast/crew: Donald P. Desmond, born somewhere in Canada on June 28, 1924. Desmond worked set construction on this film’s notoriously difficult scenery that had to fluidly break away and come together while the camera dollied in one long take.