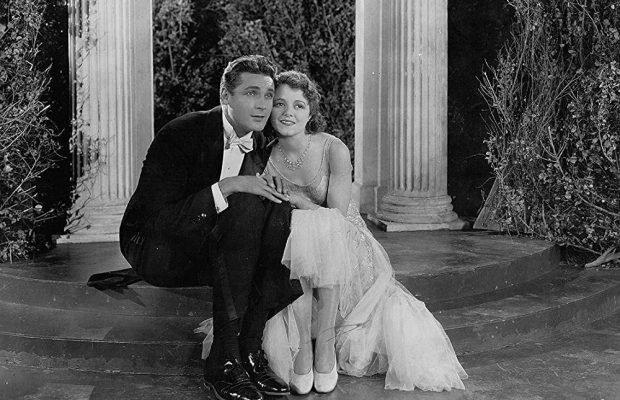 Toronto Film Society presented Sunny Side Up (1929) on Monday, August 15, 1977 in a double bill with Kid Millions as part of the Season 30 Summer Series, Programme 6. 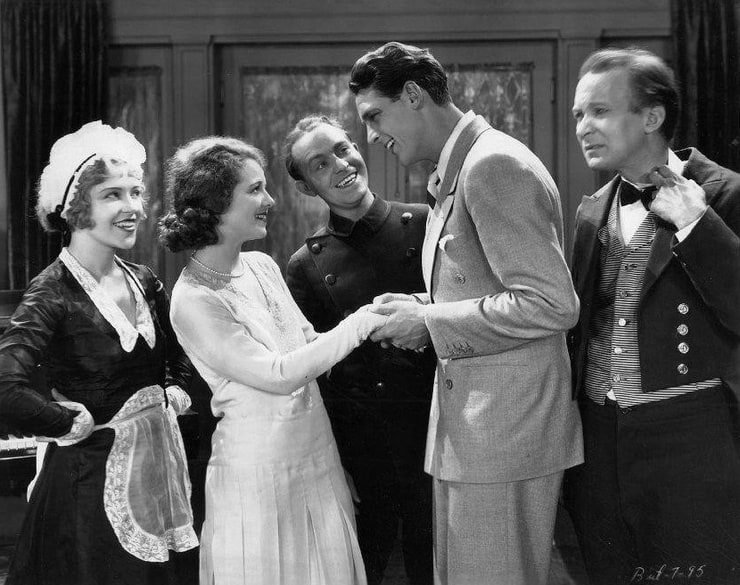 With the trend of movie musicals fully established, it was only natural to star Janet Gaynor and Charles Farrell in an all-talking, all-singing, and some-dancing cinema outing.  To concoct the vehicle, Fox used its ace writing-composing Tin Pan Alley trio of Buddy DeSylva, Ray Henderson, and Lew Brown [who would be subjects of their own musical movie biography, The Best Things in Life Are Free (1956)].  In contrast to the previous Gaynor-Farrell picture, Sunny Side Up was a very contemporary story set in the thriving metropolis of New York, with Farrell cast in a new cinema guise as a scion of the Four Hundred.  Photoplay magazine prosaically summed up the film by saying, “Something new for Janet and Charles, after their royal line of sobby little love stories.  But they came through like good troupers, and you’ll care for the results.”

While the Gaynor-Farrell silent films had showcased the two stars to equal advantage, Gaynor would fare much better in talking movies, being more adaptable to the requirements of more realistic emotion and better capable of verbalizing her visual image.  In Sunny Side Up, Gaynor’s Molly Carr is one of those delightful working girls, much in the manner of the more vivacious Marion Davies.  Gaynor’s shopgirl may live in a dreary walk-up flat, suffocate in the summer’s heat, and find her greatest diversion in sitting on the building stoop and chatting with her neighbors and pals, but she is a spunky lass who has enough energy at the end of her department store workday to be a lively companion to her friends, Marjorie White, El Brendel, and Frank Richardson.

Soon Gaynor is launched into her first production number, performed for the neighborhood during the Fourth of July block party.  Gaynor has prepared a soft shoe-song number entitled, unsurprisingly, “Sunny Side Up,” the title referring to cheerfulness in spite of the Depression and not any style of fried eggs.  With a borrowed top hat and cane, Gaynor presents a fine figure of a trim Irish colleen.  Her voice is deep, but light, in quality and a bit nasal.  Her time stepping is inexpert; however, she has vivacity and bounce with a glitter of happiness in her eyes.

In contrast, Farrell’s Jack Cromwell is the stereotype of the racquet-swinging, ukulele-strumming blue blood who devotes his days to the swimming pool, his evenings to the veranda cocktail hour, and his nights to escorting in his shiny new roadster vapid young society girls to the local country club dance.  While it was a limp one-dimensional, gutless characterization to have to play, Farrell’s weak interpretation of the part displayed more energy than conviction.

In the course of Sunny Side Up each star has his/her particular theme song, Gaynor refraining “I’m a Dreamer, Aren’t We All” on several occasions, and Farrell having his vocal moments with “If I Had A Talking Picture of You.”  During one rendering of this song, Farrell is seated at a piano with Gaynor’s radiant face superimposed on the sheet music.  The musical highlight of Sunny Side Up occurs during the midst of the inevitable encounter between the unswerving ritzy set and the accommodating hoi polloi.  Gaynor’s Molly, decked out in a becoming wardrobe and supported by her pals as bogus domestics, is ill at ease in the swank surroundings of a Long Island estate where the lowliest butler has more breeding and a bigger bank account than she.  But during the charity show, she comes to life, for performing for the public is something she can handle, even if her personal life has fallen to tatters (Farrell is being very inattentive since he is being swayed by his society friends to stick to his own class).  There occurs one of the cinema’s most grotesque but crudely captivating production numbers, staged by Seymour Felix in the best pre-Busby Berkeley tradition.  “Turn on the Heat” would be considered high camp today, but in its time the number was received by a willing public as imaginative entertainment.  The stage for this outdoor extravaganza number is separated from the oncamera audience by the swimming pool moat, giving the production gymnastics its own isolated, special, unreal look.  Within the elaborate routine, the society chorines emerge from igloos, the fake snow soon melts, and, in its place, tropical plants and palm trees shoot up, during which time the girls undulate to the changing native beat.  The song closes with tongues of flames darting up on the “island” and the chorus plunging into the pool.

Among the rash of 1929 movie musicals, Sunny Side Up fared well.  The august publication Cinema stated, “Sunny Side Up and The Love Parade [with Maurice chevalier and Jeanette MacDonald], each in its special way, are among the year’s leaders in finding out how sound and action can combine on the screen in a special form of its own.”  It should be noted that director David Butler chose to emphasize the plot of this Fox musical, sacrificing the potential romantic mood for a semblance of pace.  Within the genre’s artifices, this balance worked sufficiently well, but it is still interesting to conjecture how Frank Borzage of Seventh Heaven, etc. would have handled the film and the cinema team.

The full range of vocal display by Gaynor and Farrell in Sunny Side Up led Mordaunt Hall in The New York Times to offer a complete account of his reaction to the event.  “Miss Gaynor’s voice may not be especially clear, but the sincerity with which she renders at least two of her songs is most appealing.  Her performance is as fine as anything she has done on the screen.  So far as her singing is concerned, she is not supposed to be any prima donna….Mr. Farrell’s singing is possibly just what one might expect from the average young man taking a chance on singing a song at a private entertainment.  His presence is, however, ingratiating and his acting and talking are natural.”