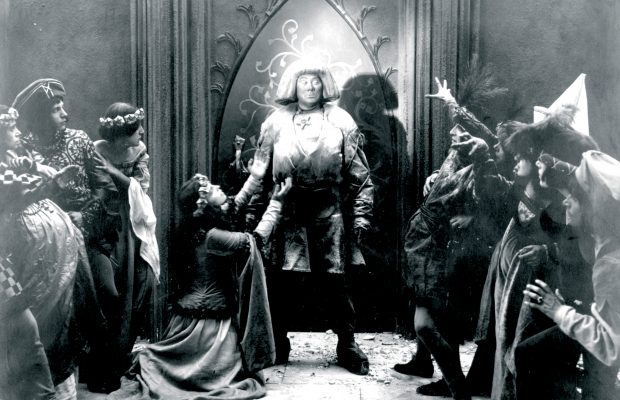 SORRY!  Although it had been booked and confirmed last summer, we were informed in mid-December that we could not have The Fall of the House of Usher for this programme, due to a booking mistake by the Museum of Modern Art Film Library in New York.  Other programmes could not be “switched”, so it was decided to substitute another European film of the supernatural–the German legend of The Golem.  The Epstein film may be shown next season.

Tonight’s programme will open with a selection from the early work in France of Ferdinand Zecca, Emile Cohl and Jean Durand.  (1905-1910).  Cohl is credited with making the first cartoon film, Phantasmagoria, in 1908; he made many more animated shorts, later turning to popular-scientific films.  Of Ferdinand Zecca, Bardeche and Brasillach in History of the Film say: “One of the outstanding directors, one of the real giants of an era of glorious absurdities (Melies’ trick-magic films, etc.)  He once growled while blue-pencilling a script: “I’m rewriting Shakespeare.  The wretched fellow has left out the most marvellous things.’  A long lineage of films was founded on Zecca’s Story of a Crime, a picture of real importance.  From it sprang a posterity of violence which is till with us.  He also made a 1200-foot Passion of Christ.”  (Not to speak of The Runaway Horse, a wildly uproarious one-reel slapstick comedy shown in the Silent Film Series’ first season – George G. Patterson.)

Made once before in 1914 by Wegener and Henrik Galeen, and re-filmed as a talkie in the ’30’s in France by Julien Duvivier with Harry Baur as the Emperor, The Golem is one of a considerable number of films with legendary or supernatural themes made in Germany in this period–among them The Student of Prague, The Cabinet of Dr. Caligari, Destiny and Siegfried.  All the last three have been shown by TFS).  In this story the clay image of the Golem, a legendary figure of the Middle Ages, is brought to life by an old Rabbi to deliver the Jews from oppression of their overlord.  The film was internationally famous in its day, and is of considerable interest for the richness of its atmosphere, its exterior settings and its lighting, as well as for the acting of Wegener.

H.H. Wolenberg in 50 Years of German Film says: “A decisive gain for the German cinema in its development into an art with the great actor Paul Wegener.  Above all he discovered novel possibilities of the camera in trick-technique and in bringing to the screen the supernatural and the fairy-tale.  As leading actor of his films he was never bettered in his particular style, nor did any other camera ever cast the spell of his legendary world over the eyes of the public.  His greatest achievement was The Golem.  The Story held the audience enthralled.  medieval Prague with its Ghetto came to fantastic life, and if there is any work to prove that the film may be an independent art form it is The Golem.”  (Mr. W. May have overstated things a bit, but we thing it’s worth seeing! – George G. Patterson.)

Paul Rotha in The Film Till Now lists The Golem among German films “superb in their creative architecture”, and writes of “the co-ordinated movements of the crowds in this remarkable film.  Seen at times through a window, they moved along narrow streets in straight lines and intersected straight lines across the screen.  The fact that their direction was restricted and indicated by the walls of the streets added emphasis to their destination and intent.”