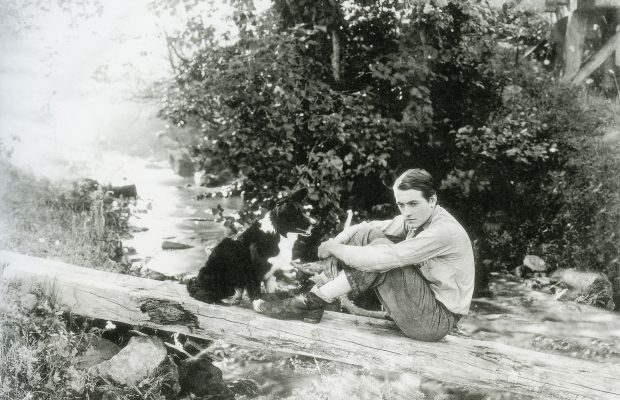 The first part of the programme will include these short films:

The following comments are from Film Notes of the Museum of Modern Art, N.Y.:

“Tol’able David is one of those rare films on whose excellence everyone–film audiences, film critics, film makers–are agreed.  A tremendous popular success, winner of the Photoplay Magazine Gold Medal for 1922, it is also continually cited by Pudovkin in his book Film Technique.  The story, simple and tender, follows very closely the plan and purpose of Hergesheimer’s novel, skilfully adapted page by page into screen terms.  Since the novel itself was as much dependent on character as on incident, no mere literal translation could have produced the profound sense of people and reality that Henry King worked into this film.  Audiences were impressed by the reality King achieved; film-makers by the means with which he achieved it.  As an example, Pudovkin quotes at length from one of the earlier scenes in the film, establishing the character of Luke Hatburn.  We already know he is an escaped convict; his appearance suggests a tramp.  A subtitle with a few literary adjectives might have completed the picture.  Instead, King correctly chose to build a graphic image of the man through what Pudovkin refers to as ‘plastic material’, externally expressive material that characterizes in completely filmic terms (the episode with the kitten).  This same approach is apparent throughout the film.  The impressive sequence in which David comes to realize his new responsibility after his older brother has been crippled, taking down his rifle to prepare for vegeance, is film-making of a high order.  From that point on, visual reference to the rifle symbolized the revenge motif; the rifle itself becomes revenge incarnate.

Seeing Tol’able David afresh after years of the sound film, one is made forcibly to realize the change in technique that sound produced.  One realizes it, too, with a sense of loss.  The smoothness in editing sought for in films today, the cut subordinated to a mere device for changing camera angle and skilfully obscured by a continuity of motion, seems to have robbed the art of some of its drama and much of its rhythm.  The tensions formerly built by purely filmic devices now tend to come from dialogue, music and acting.  The cutting in the climactic sequences of Tol’able David–from the fight in the cabin intercut with Esther racing to town for help, to the unforgettable shot of the cabin door slowly opening while the spectator waits in suspense to discover the victor–is masterful in its continued acceleration of tempo.  It is the cutting again that reveals the gathering force of passion as tragedy strikes the Kinemons, after Allen has been crippled.  Shots of the family in the cabin alternate the shots of Allen’s wife rocking by his bedside, rocking faster and faster as the passion mounts, then suddenly still as their anger flows over into grief.  In all of this, Henry King’s debt to D.W. Griffith is apparent.  To Richard Barthelmess, who had already established himself as an outstanding screen actor in Griffith’s Broken Blossoms and Way Down East, Tol’able David brought stardom.”

Lewis Jacobs in the Rise of the American Film writes:

“One of America’s celebrated pictures–revealed Henry King as a director with an unusual taste and talent for cinema values and methods.  He became one of the most respected and esteemed director because of his delicate and moving artistry and technical command of the medium.  King said in 1922: ‘You have got to tell a story if you want to make a good picture.  You’ve go to think in terms of pictures.  Films demand different treatment from the stage’.  This understanding has been evident in all King’s efforts.  Raised in a Virginia village, he endowed stories of small-town American life with a naturalism uncommon on the screen.  Tol’able David, shown with a minimum of advance publicity, made its mark immediately as a small-town masterpiece.  During a year when the industry was undergoing its first major depression, when panicky producers were making more and more lurid ‘sexy’ pictures to attract customers, the public flocked to see this simple, unextravagant, sincere and moving tale of Southern life.  Its subject matter was fresh and unstereotyped; its characterizations were honest and rounded; the narrative was simple and unmelodramatic; the whole picture was frank and pungent rather than sentimental.”

Paul Rotha in The Film Till Now said:

“Henry King is one of the most sincere American directors, whose work seldom achieves the attention it deserves.  In Tol’able David he expounded his theme with a delicate use of detail and a sympathetic employment of landscape for the emphasis of atomosphere.  The material was distributed with a nicety of feeling rare in the American film; the continuity was balanced to perfection and flowed with admirable smoothness.”

Rotha ranks Tol’able David as an example of “almost perfect continuity and complete fluidity of development”, along with Murnau’s The last Laugh and the films of Eisenstein and Pudovkin.

HENRY KING, save for John Ford, has the longest seniority of any veteran American director still working today.  In nearly 40 years of film-making, h has had, naturally, his ups and downs, but has remained a sensitive and able craftsman, whose more successful works include the following:

(SOUND):  State Fair (non-musical version) with Will Rogers, Janet Gaynor, Lew Ayres.
In Old Chicago.
The Song of Bernadette, with Jennifer Jones.
Twelve O’Clock High and The Gunfighter, both with Gregory Peck.
Carousel.