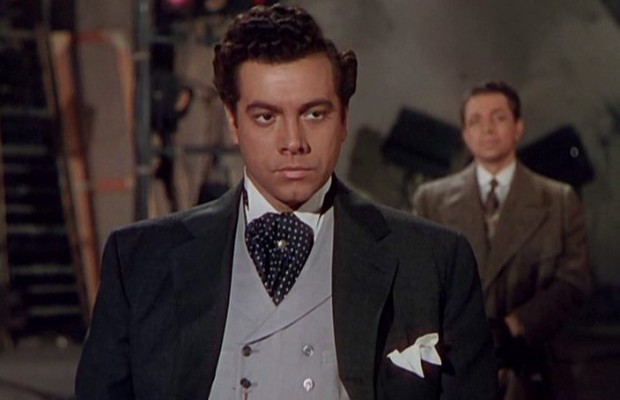 Toronto Film Society presented The Great Caruso (1951) on Monday, November 30, 2015 in a double bill with Charlie Chan at the Opera as part of the Season 68 Monday Evening Film Buff Series, Programme 3.

Toronto Film Society presented The Great Caruso (1951) on Monday, January 25, 1982 in a double bill with Brigadoon as part of the Season 34 Monday Evening  Film Buffs Series “B”, Programme 7.

Caruso possessed one of the most beautiful tenor voices the world has ever known.  In his young days it was mellow, sumptuous, of baritone-like quality in its lower register, and until 1906 he sang with almost reckless abandon and gaiety.  During the next stage of his vocal career he perfected his art, and his phrasing and style became well nigh impeccable.  In 1908-9 he suffered a temporary vocal setback (no doubt caused by his first wife’s desertion in 1908, a fact entirely overlooked in The Great Caruso), and subsequently his voice darkened.  But all who heard him sing at any stage in his career claim that no sound like it has been heard since.  He was moreover a convincing actor, especially in such roles as Eleazar, Canio, and Vasco da Gama.

Caruso was perhaps the first true ‘gramophone’ tenor; he began recording in 1902 and made his last recordings in 1920.  It is said that during his lifetime his royalties from records amounted to something between four and five hundred thousand pounds ($2 to $2 1/2 million).  From his many records perhaps his ‘Una furtiva Lagrima’ (1904) and ‘O Paradiso’ (1910) represent operatic singing t its very greatest.  His career came to an end on Christmas Eve 1920 when he was singing Eleazar in ‘La Juive’ while suffering from acute pain which developed into bronchial pneumonia.

“Mario Lanza was one of the screen’s comets: his light dazzled briefly, then fizzled out.  Today his records still sell and there are posthumous fan clubs; apart from their members, he is perhaps only remembered by some aged MGM accountants.

He was born Alfred Cocozza in 1921 (on January 31, the same year that Enrico Caruso died) in Philadelphia, where his dislike of discipline manifested itself early; he was expelled from high school.  He sang as a child and studied voice; was still studying and working temporarily as a piano-mover when Sergei Koussevitsky of the Boston Symphony Orchestra heard him sing (while shifting a piano, it says here).  As a result he sang at the Berkshire Music Festival in Tanglewood  in 1942. During his army service he sang in the chorus of Moss Hart’s “Winged Victory” and took part in the film version (1944).  In 1945 he was signed to an agreement by Sam Weiler, a real-estate man and amateur music-lover, who offered to spend $60,000 on training him in return for which he would become his agent and, if he clicked, get his money back.  He got Lanza an RCA Victor recording contract, but, due in part to Lanza’s squabbling with them, the first record wasn’t issued till three years later.  Lanza began a heavy schedule of concert tours; sang in a concert performance of “Andrea Chenier” in the Hollywood Bowl (1947) and made his opera debut as Pinkerton in “Madame Butterfly” (1948).  MGM executives saw another Bowl concert that year and signed him to a contract.

Joe Pasternak was given the job of producing his first film and came up with That Midnight Kiss (1949), all about a barrel-chested piano-mover who has a glorious voice and turns out to be just what the Philly Opera needs!  Special operative sequences were written, but couldn’t save it at the box-office.  Kathry Grayson was the leading lady and MGM thought of them as a new Macdonald-Eddy.  They were teamed again, after a year’s hesitation, in The Toast of New Orleans (1950), all about a fisherman who becomes a famous–guess what?  This did use “real” opera and was fractionally less inane.  It still flopped; but about six motnhs after its release one of the songs (“Be My Love”) turned out to be a hit; and Lanza’s Red Seal records were not only selling, but were highly regarded by (some) music buffs.  MGM took a gamble: they could remake The Jolson Story with “classical” music, starring Lanza.  They called it The Great Caruso and filled it with opera pops, like a pudding stuffed with plums.  It made $10 million during its first year on release, and perhaps the only one unhappy was Caruso’s widow, who bitterly regretted selling her Caruso memoir to MGM.  Lanza became the new golden boy.

There was one problem, but it was a major one; the star himself.  Pasternak in his memoirs says that Lanza was difficult from the start: “There was a wild, unpredictable streak in his nature.”  Also he could “put on fifty pounds as easily and quickly as most people add an ounce or two”–nor could he be persuaded to stop eating.  His capacity for booze was equally sensational (later, drugs were added) and a Time Magazine profile detailed a number of unpleasant habits, such as a dislike of soap-and-water and not bothering to go to the men’s room to take a leak.  This article, understandably, made Lanza furious; he blamed MGM and refused to report for his next film.  When he did, says Pasternak, he was “writing a new definition of the word temperament.”  Grayson had flatly refused to co-star, and Lanza’s behaviour towards his leading lady–Doretta Morrow, brought in hurriedly from Broadway–reached a new low.   …Shortly after finishing For the First Time (1959) Lanza died in Rome of a heart attack (October 7, 1959); his wife, a non-professional, died a while later, with alcoholism a contributing factor.  Hedda Hopper wrote of him: “He recognized no authority, no discipline, no frontiers except his own gigantic appetite for food and drink and women.”

The Great Movie Stars: The International Years by David Shipman