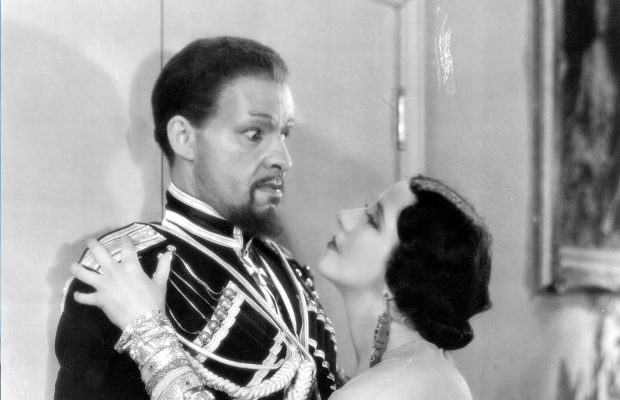 Toronto Film Society presented The Guardsman (1931) on Monday, August 17, 1981 in a double bill with The Chocolate Soldier as part of the Season 34 Summer Series, Programme 5. 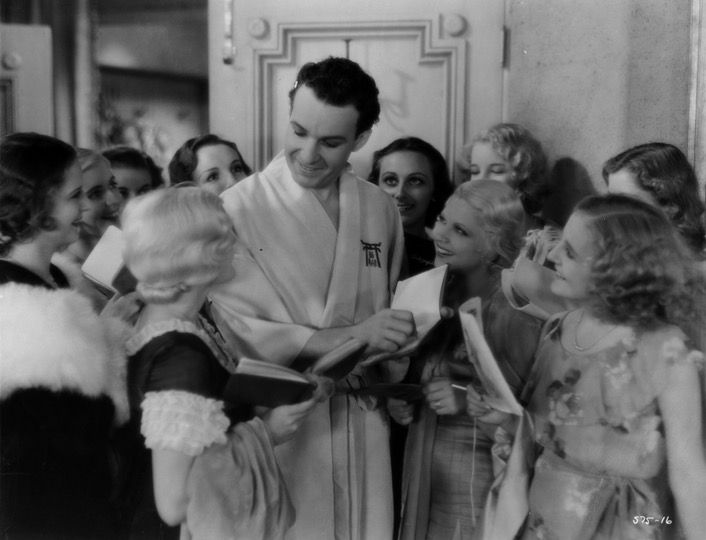 It might well be claimed that one of the most important playwrights of the American theatre of the early-middle 20th century was Ferenc Molnar (1878-1952)–this in spite of the fact that Molnar was born in Hungary, lived there for most of his life, and wrote all his plays in Hungarian for Hungarian audiences.  Broadway, however, especially in the 1920s and 30s, had a passion for Hungarian plays, above all those of Ferenc (pronounced “Ference”) Molnar, some sixteen of which were produced there in English versions between 1908 (The Devil starring George Arliss) and 1940, the year in which Molnar, a war refugee, moved to New York.  This love affair really began in earnest in 1921 when the Theatre Guild produced Molnar’s 1909 play Liliom (the original of Rodgers’ and Hammerstein’s 1945 musical, Carousel).  Among the best known of the later follow-ups are The Play’s the Thing, The Swan, The Good Fairy, and of course the subject of tonight’s program: The Guardsman.  (The Billy Wilder film, One, Two, Three, was based on a 1926 one-act play by Molnar of the same name).

“A testör” (The Guardsman) was first produced in Budapest in 1911.  Later the same year it was presented in London as Playing with Fire, with Robert Loraine and Alexandra Carlisle, but without success.  (Molnar never did catch on in England).  As Where Ignorance is Bliss, in a translation by Philip Littel, it played in New York in 1913, but though it got good notices, it only lasted a week and a half.  Not till 1924, when the Theatre Guild presented it in a new adaptation by Philip Moeller, with Alfred Lunt and Lynn Fontanne, did it become a hit, running or 248 performances and revived many times since.

Disguised as a Guardsman the actor seduces his own wife, but when he confronts her with the truth, she claims she knew all along who he was.  Thus the poor man is torn between the wounding of his professional pride as an actor and the agony of believing his wife is unfaithful.  The Moeller adaptation used by the Lunts makes it ambiguous as to whether the wife did or did not really recognize her husband all along; but apparently Molnar’s original text makes it clear to the audience that she had not recognized him, and that her claim that she had was only quick thinking on her part.

The Theatre Guild’s production of The Guardsman is also notable historically for being the first time in which Alfred Lunt and his wife Lynn Fontanne appeared together on the stage.  Lunt was born in Milwaukee in 1892, and made his debut as an actor in Boston in 1912.  Lynn Fontanne was born in England in 1887 (?) and made her debut in a Drury Lane Christmas pantomime in 1905.  Her professional career was centered in London until 1916 when she moved to New York, where she became very successful.  She and Lunt were married in 1922, but it was not until two years later, with The Guardsman, that they became a professional team as well.  The success of the play launched their joint career as one of the greatest husband-and-wife teams in American theatrical history–too well known to require a precis here, even for a film audience; but among their other successes were Reunion in Vienna, Elizabeth the Queen, Design for Living, The Taming of the Shrew, There Shall Be No Night, and The Great Sebastians, to name only a few.  Toronto last saw them in 1960 in The Visit.  The partnership, on and off stage, ended only with Lunt’s death in 1977 at the age of 84.  Fontanne is, to the best of our knowledge, still living quietly in their country home in Wisconsin at the age of 94.

Apart from a cameo bit as themselves in Stage Door Canteen (1943), this screen version of The Guardsman was the only film that Lunt and Fontanne ever made.  (Lunt himself, however, made three unimportant silent films in 1923-24: Backbone, The Ragged Edge and Second Youth).*  The Guardsman thus has additional priceless value as the only permanent record of their artistry.

Although The Guardsman regrettably failed to make popular movie stars of the Lunts, the film itself thereafter became something of an underground classic, occasionally turning up in commercial theatres as well as on film society programs.  It will probably continue to do so for many years to come.