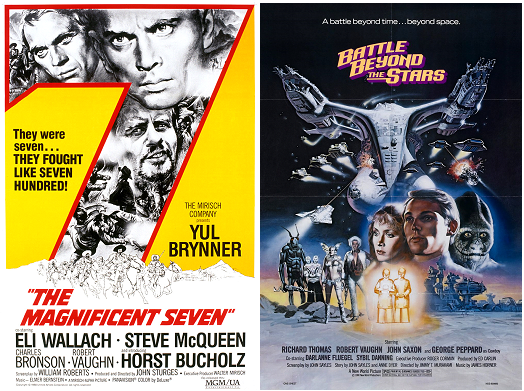 Toronto Film Society presented The Magnificent Seven (1960) on Monday, August 10, 1981 in a double bill with Battle Beyond the Stars (1980) as part of the Season 34 Summer Series, Programme 4.

Tonight’s two films are remakes of a film originally produced in 1954, and directed by Akira Kurosawa, called The Seven Samurai.  In order to discuss tonight’s two features, one must discuss the film from which The Magnificent Seven and Battle Beyond the Stars are derived.

In the true dictionary meaning of the word, rather than the devalued English of the advertising agency, Akira Kurosawa’s The Seven Samurai is an epic.  Even the heavily cut, yet still lengthy version must e rated one of the most extraordinary masterpieces of the fifties.

Kurosawa had long wanted to make a real “jidai-geki”, a real period film.  These films were very rare, most of them (as now) were “chambara” with the American western (the “seibu-geki”) and the comparison is appropriate.  Digging back into the history and myths of his country, Kurosawa eventually discovered the figure of the “samurai”, a wandering knight as quick to draw his sword in defence of the weak as the legendary westerner had been to draw his gun.  Freely interpreting the Japanese folk hero in light of cowboy films, Kurosawa came up with the samurai movie.  The Seven Samurai attempts to transplant the morality of an American western to an ancient eastern setting.

It is not unrewarding to compare Kurosawa with John Ford, by whom he claims to have been influenced.  There are many superficial resemblances: the reliance on traditional values, the use of folk ceremonies and rituals, the comic horseplay, to Ford in particular and to the western in general.  The fast, vivid handling of the action sequences, the staccato cutting, the variety of angles, the shooting up through horses rearing in the mud, are all reminiscent of films in this genre.

The tory is of a small village that is yearly invaded by bandits and the farmers lose their crops and sometimes their lives.  One year the elders decide to do something about it.  they decide to hire a samurai.  The elders find their first samurai rescuing a small child.  They cannot offer him any pay, merely food, a place to sleep, and the fun of fighting.  Thus the villagers have the first samurai, the Leader.  One by one the others are recruited: the Aide, the Young One, the Swordsman, the Good Natured One, the Quiet One and the Would-Be Hero.  The warriors enter the village in triumph, and first the farmers are terrified.  Gradually the Samurai are accepted, and under their supervision the farmers prepare for both the harvest and the upcoming battle.  Then the on-rush of horsemen, the siege is on, and the farmers, led by the seven Samurai, fight victoriously.  Many lives are lost including four of the Samurai, but the village’s freedom is secure.  Life continues almost uninterrupted.  The Samurai reflect that no matter who wins the war, the soldier always loses.  As the Leader states, “It is those peasants who have won the peace, and not ourselves.”

When the film was released in the States, John Sturges immediately seized on the idea of remaking it as a western.

In William Roberts’ Hawksian script much of the Japanese original, including most of the characters and incidents, are retained.  The seven become out-of-work gunmen and fugitives in a border town and their task is the protection of a Mexican village from a bandit gang.

As in The Seven Samurai, each of the gunmen is individualized.  Chris, the leader; Vin, who is restless and seeks activity and employment; Chico, who wants prestige and sees obtaining it by joining the group; Harry, who is seeking some fabulous fortune; Britt, an opportunist who tests his skills to their limits; Bernardo, half-Indian, a wanderer who sympathizes with the people; and Lee, a fugitive gunman who is looking for asylum and an escape from his failing ability.

The role of Lee, played by Robert Vaughn, is almost the same role that he plays in Battle Beyond the Stars, Gelt, an outlawed trouble-shooter, wearily attracted by the promise of food and shelter. 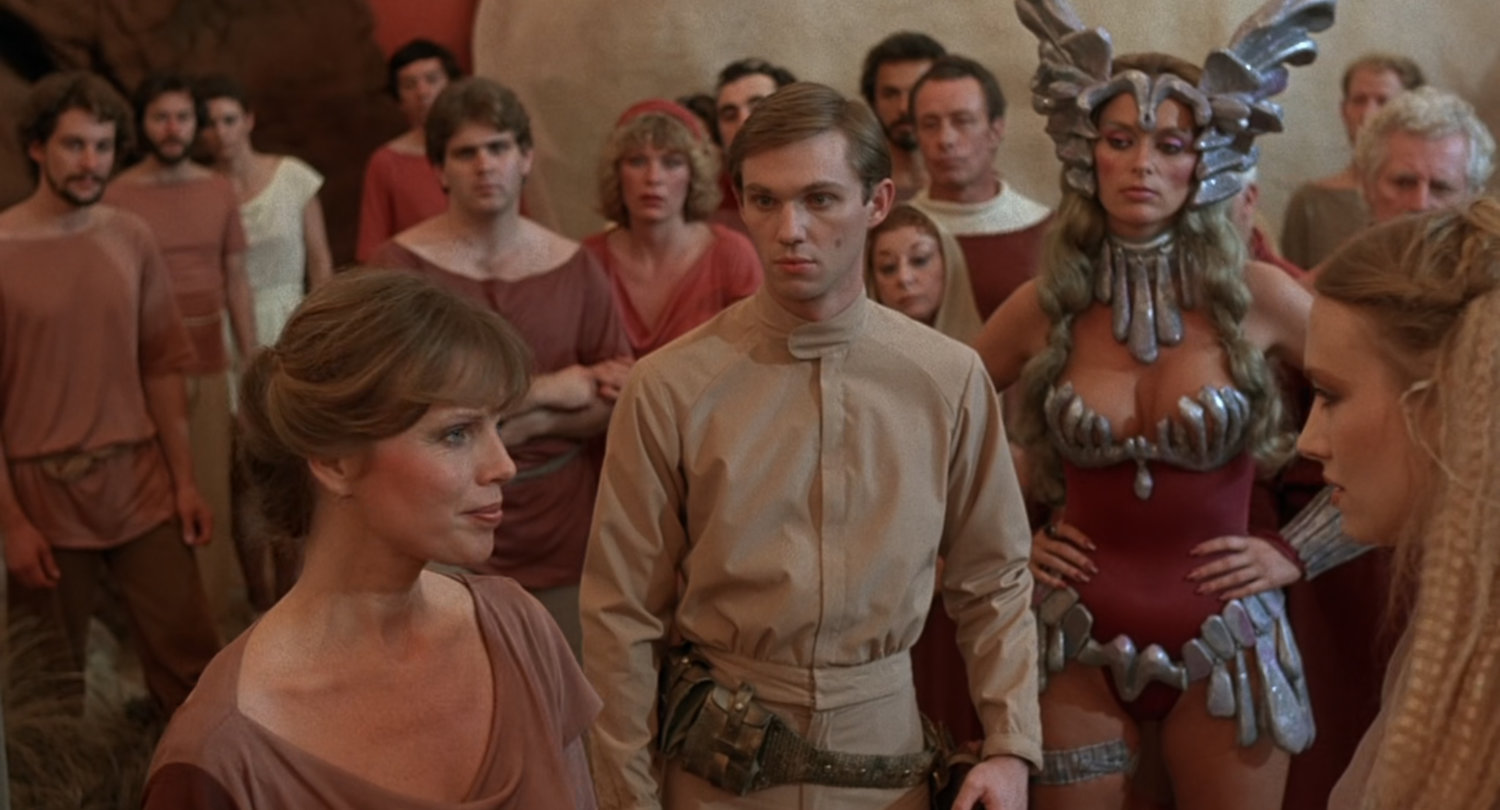 As in its predecessor, four of the seven mercenaries die in the savage fighting.  The three survivors are finally victorious, but their triumph is a bleak one sowed by the realization that they themselves must remain wanderers.  As Chris the leader states, “It is not we who have won, it is the peasants.  They love their earth, but we have nowhere.”

Sturges, like Kurosawa, makes great use of deep focus, low-keyed interiors, but eschews Kurosawa’s use of slow-motion and frequent close-ups.

The Magnificent Seven in fact marks a return to that hazardous dichotomy of the traditional and the anti-romantic, initiated over ten years earlier by The Gunfighter.  First, The Magnificent Seven gives an off-beat, articulate western in Yul Brynner, a clear departure from tight-lipped westerns of the past.  Even Brynner’s black outfit was an innovation, previously associated with villains.

Another innovation as well was that previously westerns had been shot either on studio sets or actual locations in the American west.  The Magnificent Seven was the first of many major westerns shot in Mexico, Italy and Spain, giving audiences a new visual experience as background for such stories, while beginning a trend towards international westerns.

The Magnificent Seven is a serious remake of The Seven Samurai, but 20 years after John Sturges’ film appeared, a new remake came out, Battle Beyond the Stars.  This is a rather clever remake using the space adventure elements employed by George Lucas in Star Wars.  Instead of a small village being terrorized, it is a peaceful planet named “Akira”.

This film has a sense of humour about itself, being produced by Roger Corman.  Richard Thomas’ spaceship looks like a moose’s head; the enemy ship looks like a black beetle.  The characterizations are all exaggerated and are played strictly for laughs.

Again it should be noted that tonight’s two films both owe very much to their predecessor, The Seven Samurai, whose complete version has never really been seen.  Although heavily edited (a major cinematic tragedy) it is a most vital film.