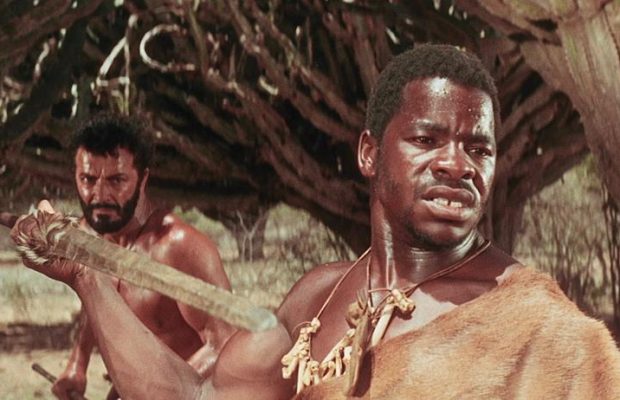 Toronto Film Society presented The Naked Prey (1966) on Monday, November 9, 1981 in a double bill with The Third Man as part of the Season 34 Monday Evening Film Buffs Series “B”, Programme 3.

This is an odd, misguided, but by no means uninteresting attempt to make an experimental film within a conventional framework.  Producer-director Cronel Wilde has evidently modelled his conception upon Bunuel, and the story is a sort of Robinson Crusoe in South Africa, with a Girl Friday, and the addition of a pursuit motif.  Wilde is intent on showing us primitivism at its extremes: rarely has an adventure film used up such reserves of blood and sweat and brutality.  Wilde’s own performance has a simple honesty: he really is a man naked, and when he tears a rattlesnake to pieces and gorges on the flesh we see the real thing in prolonged and awesome detail.  Though the direction and photography are often inventive, they fail to resist great chunks of indigestible symbolism: the patterning of man’s predicament in the lives of the animals all around him is maddeningly trite.  Even so, it’s an unexpected film.

TFS badly needs volunteers to type our programme notes, and
to run them off on the mimeographer.  (We provide the machines:
the typewriters are late models; the mimeographer is a truly
historic vehicle).  If either of these tasks is to your taste,
please approach one of the directors (wearing the blue and
white badges); he or she will overwhelm you with gratitude!