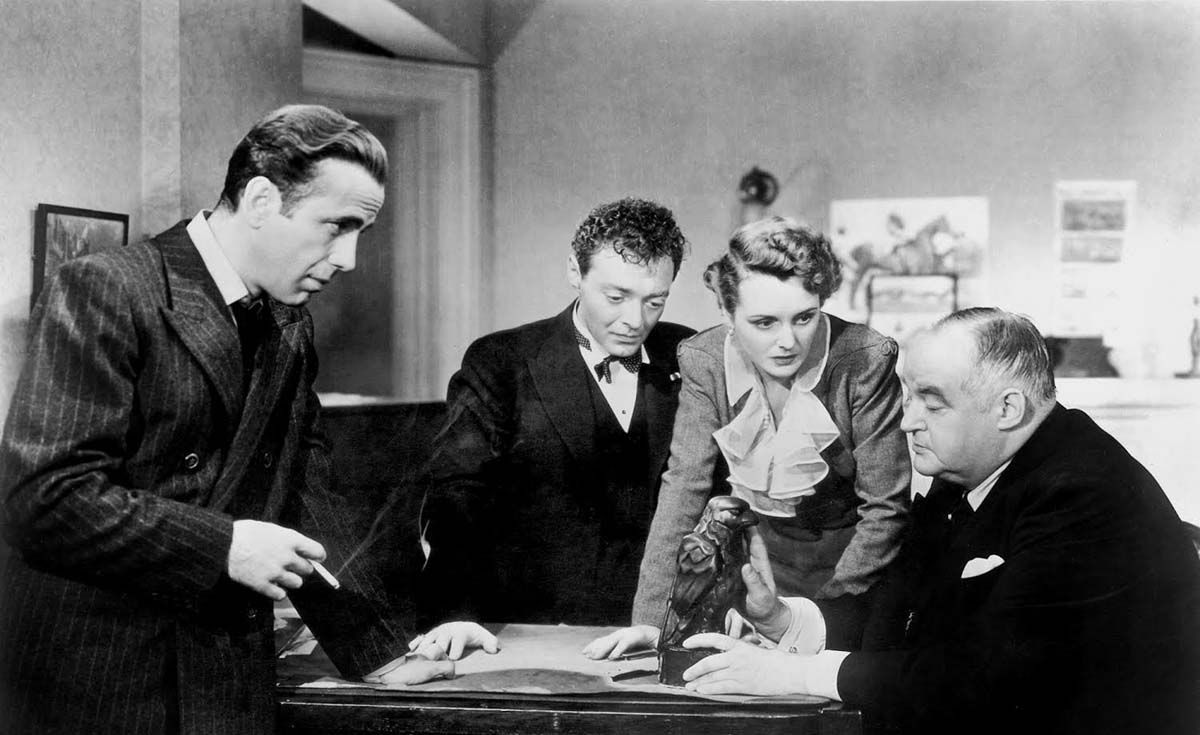 In 1941, John Huston made his directorial debut with The Maltese Falcon (shown previously by TFS on 6 Oct. 69) and initiated a new film genre related to the detective story.  Thirteen years later, he made Beat the Devil (1954), a film containing many of the components, and indeed even some of the cast of The Maltese Falcon but in which the comic elements inherent in the genre are exploited to satiric effect.

Two major variations on the classic detective story have been developed by changing the world view presupposed in the detective story.  The police procedural story remains relatively close to the detective story but changes the narrative perspective to that of the police who continue to deal with readily attributed crimes and a host of bureaucratic concerns even when dealing with the exceptional localized intrusion of evil that calls upon them to function more in the rationalistic, deductive fashion of the detective.  Along with this refocusing of the milieu, the narrative thrust of the police procedural story is impelled less by logic than by unrelenting routine.  Often the small and ordinary events that make up the lives of the detectives in police procedural stories tend to take on greater importance than the socially and personally disruptive consequences of the hidden guilt that tends to remain in the centre of the story.  Thus the criterial attributes of the police procedural story can be reduced to two, namely, (1) the story is structured around a localized intrusion of evil which stands out as figure against a background of lesser apparently routine instances of evil, and (2) the narrative thrust of the story is sustained by routine supplemented by the almost mundane application of logic while being decorated with the everyday details of the personality and private lives of the detectives.

The Maltese Falcon was written by Dashiell Hammett and had been previously filmed both under the title The Maltese Falcon (1931) and Satan Met a Lady (1936) before it was scripted and directed by John Huston in 1941.  Hammett’s novel is a hard boiled detective story but the first two film treatments failed to achieve any particular distinction.  By returning more directly to the novel and at the same time making the hero more of a paladin figure, Huston created a new film genre, i.e., the noir detective.

Other films which might be considered to be noir detectives were made during the following decade, e.g., Murder, My Sweet (1944), (shown by TFS on 28 and 29 July 75), The Big Sleep (1946) (shown by TFS on 19 Aug. 68), The Blue Dahlia (1946) and The Lady in the Lake (1947).  Critical examinations of such films published during the sixties focused so singularly on their use of black and white photography that some writers all too glibly expressed their opinion that it was no longer possible to make such films.  Indeed during the fifties noir detective films did not find much of an audience.  That appears to be because the ethos of the time didn’t support the world view that must be entertained if one is to like noir detectives.  It was only later in the seventies when the assumption of a pervasive evil became sufficiently tenable again after Vietnam and Richard Nixon, that noir detectives such as Chinatown (1974), Night Moves (1975) (shown by TFS on 14 Apr. 80), The Late Show (1977), and more recently The Formula (1980), and The First Deadly Sin (1980) were made.

Although James Helvick was obviously no Dashiell Hammett, his book Beat the Devil contained a large number of similarities to The Maltese Falcon.  However, when both Humphrey Bogart and Huston were dissatisfied with the initial screenplay for Beat the Devil, and the decision to hire Truman Capote was made, it was a conscious opting for a comic treatment of the material.