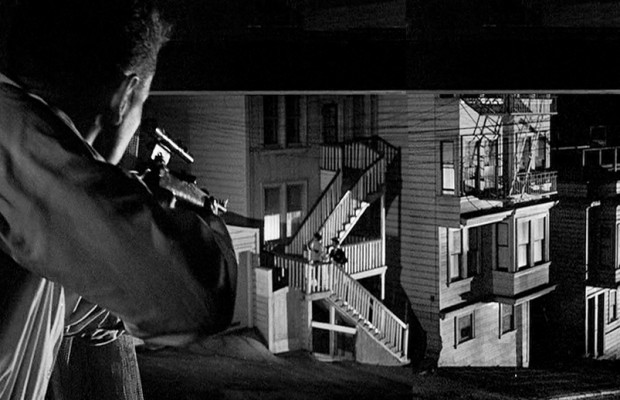 Toronto Film Society presented The Sniper (1952) on Monday, December 19, 1977 in a double bill with The Unknown Man as part of the Season 30 Monday Evening Film Buff Series, Programme 4.

A solemn rebuke to society for not doing enough to confine and correct the incipient sex criminal is dutifully put into words in Stanley Kramer’s new picture, The Sniper.  But the preachment is primly academic and it seems but a dignified excuse for working a slightly different angle into a simple man-hunt on the screen.

The focus in this decorous crime film is a seemingly normal young man who is, nonetheless–as a foreword puts it–“an enemy of womankind”.  For some unaccounted reason he has a mad grudge against dames that he takes out, on periodic occasions, by shooting women from windows and rooftops as they walk in the streets.

…The kick-off murder of a sultry saloon singer, whom Marie Windsor plays, is ticklishly enacted, and the dragnet thrown out by the police, headed by a clean-shaved Adolphe Menjou, is interesting to observe.  Frank Faylen, Gerald Mohr and Richard Kiley also contribute to the pace as assorted police factotums, and the real San Francisco building and streets used for locales of the picture give it authority.”

Excellent, realistically filmed drama of mentally deranged sniper who can’t help himself from killing unsuspecting women.  Fine performances by all.