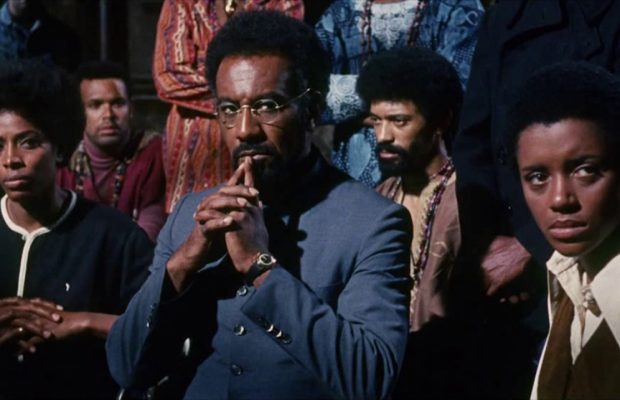 Toronto Film Society presented Uptight (1968) on Monday, December 6, 1982 in a double bill with Murder Most Foul as part of the Season 35 Monday Evening  Film Buffs Series “B”, Programme 3. 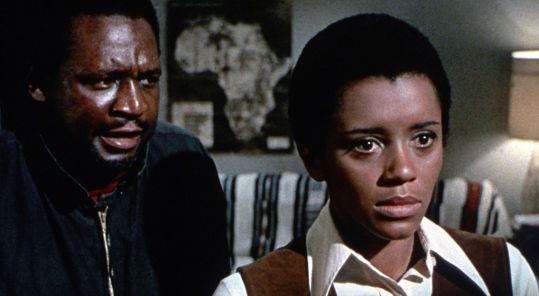 In his New York Times review, Vincent Canby calls Uptight “an earnest hybrid of a movie . . . the transportation of The Informer from Dublin at the time of ‘the troubles’ to the Cleveland of 1968 in the hours immediately following the assassination of Dr. Martin Luther King in Memphis.

The betrayed Irish patriot has been turned into a black militant, and the British Occupation Force into the White Establishment.

Canby is frank in his assessment: “None of this really works . . . but Uptight is such an intense and furious movie it is impossible not to take it seriously.  It is the first American film to deal bluntly with the mind and mood of the black man who has move beyond the range of the white man’s voice.”

Canby continues: “Dassin’s first American film in more than 20 years . . . jumps into the middle of a social phenomenon which has been carefully avoided by almost everybody except a few documentary film-makers. . . and the national magazines.

He terms the effect on the big theatre screen “stunning and hair-raising.”

“The central character, Tank, is played by Julian Mayfield, in his first movie role.  Herein lies one of the major differences between The Informer and Uptight.  The subsidiary characters here are all more interesting than Tank himself. . . whereas Victor McLaglen was the key figure in The Informer.”

Both Mayfield and Ruby Dee, who plays his mistress, were involved in the writing of the screenplay.  Raymond St. Jacques has a fine role as the militant leader, and Frank Silvera also performs well as the conciliatory black man.  The crowd scenes as staged by Dassin are extremely well-done.

Canby concludes: “Uptight is so important in its essentials that it may not be possible to judge it simply as an entertainment movie.”  Other critics were well divided in their opinions.  Leonard Maltin calls it “a tough remake of The Informer . . . ghetto style,” and awards three stars.  Angela and Elkan Allan, in Movies on Television, say the use of newsreel footage simply shows up the phoniness of the rest.  Halliwell’s Film Guide calls it “too schematic to make any dramatic or human impression.”

ABOUT JULES DASSIN: He was born December 18, 1912, in Middletown, and began with a series of shorts on such personalities as Arthur Rubinstein (1941) (1941) and Pablo Casals, in the same year.  For MGM he produced a memorable short version of The Tell-Tale Heart in 1941.

He was one of several American Filmmakers driven out of Hollywood by the McCarthy witch-hunt of the 1950s, and developed a new career in Europe.  From 1936 to 1940 he had been a stage actor, producer, and radio scriptwriter.

He worked for RKO for a year, then joined MGM to direct shorts.  After the successful trio of Brute Force, Naked City and Thieves’ Highway in Hollywood, he built an even more successful career in Europe with Rififi, He Who Must Die, and Never on Sunday.

In an interview, Dassin explained his philosophy: “What interest me is truth.  The cinema is a mass art, and the cheapest form of entertainment.  You discover in my films a blend of documentary and poetry.  This is my poor search for an expression of truth.

In a 1963 interview in Films an Filming, Dassin was obviously still bitter, telling the interviewer: “The international Hollywood business octopus still uses the infamous blacklist as an excuse to keep certain people out of the world film arena if their ‘profitability’ is uncertain.