Toronto Film Society presented Blondie Johnson (1933) on Sunday, February 24, 2019 in a double bill with Gabriel Over the White House as part of the Season 71 Sunday Afternoon Special Screening #8. 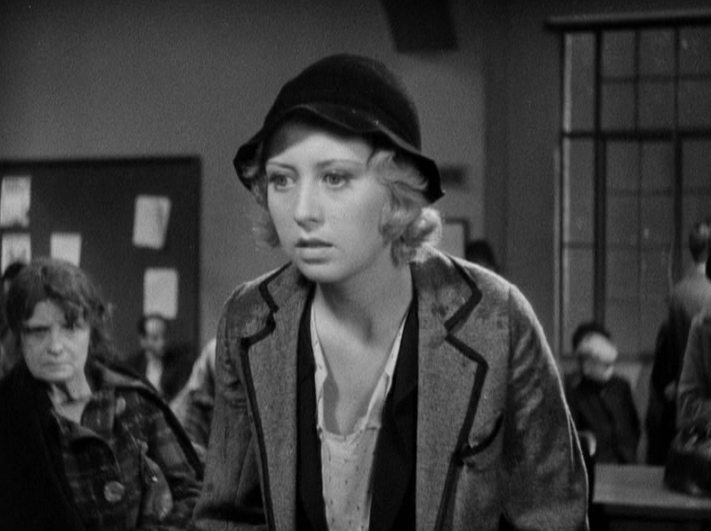 I became aware of Joan Blondell as a kid when my mother pointed her out while watching the popular 60s show, Here Comes the Brides.  Ever since then, I was able to recognize her.

Joan Blondell began working for Warners Bros. in 1930 when she played Dorothy Mackaill’s sister in The Office Wife.  Warner Bros. was a work factory and Blondell was one of their busiest work horses.    In 1933 alone, besides Blondie Johnson, six other of her films were released along with one short.  Among these films were Broadway Bad, which we screened here at the Kingsway recently, Gold Diggers of 1933, Footlight Parade and the controversial and, so far lost film, Convention City.

There are three interesting aspects to Blondie Johnson.  It was made at the height of the Depression and the opening depicts how the average person was suffering even with the government attempting to assist by setting up Welfare Relief Associations throughout the States.  We learn early on that there is very little money for all the people who are suffering poverty.  Blondie is in a pretty precarious predicament—a sick mother, out of a job due to molestation, feeling guilty for taking charity from those who are no better off than herself, a younger sister who died from a botched abortion—but even with these serious problems, she begins to realize that she only has herself to rely on.

The second interesting aspect is that Blondie chooses to use her brains instead of her body to acquire wealth, regardless of whether the wealth is ill-begotten or not.  Considering she sometimes looks like what you would imagine a grown-up Shirley Temple would have looked like at the time, it’s quite a feat.  She becomes the boss of a gangland syndicate, something that I don’t recall seeing a woman—and a woman we can’t help liking—do in any other movie.  She must decide, as well, whether it’s love or business that comes first.  Things become rather strange and tense when she finally decides.

The third aspect that’s quite unusual is that there’s an interracial relationship between Lulu and Joe played by Toshia Mori and Donald Kirke and no one blinks an eye.  It’s noticeably refreshing.

The ending is worth pondering.  Is it a true pre-Code ending, or was it designed to appease both the censors and the public?  So, with that, we hope you enjoy the film. 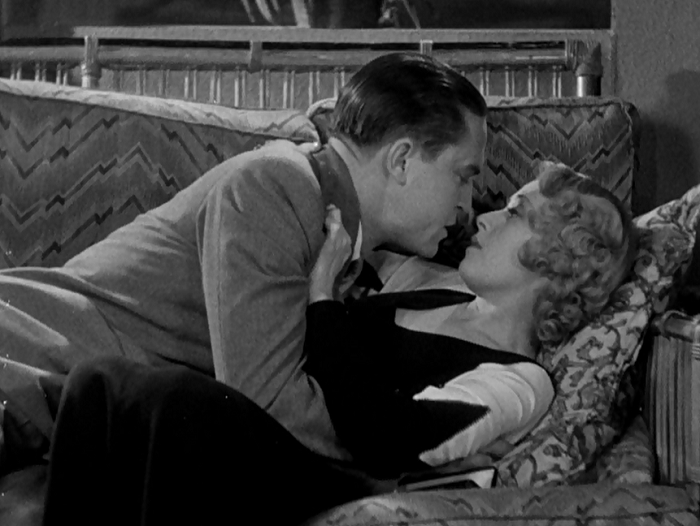 Joan finally had her chance at a solo turn with Blondie Johnson.  This was her movie outright; she worked every day of its four week schedule.  Conceived as a female Little Caesar, Blondie undergoes an extreme transformation at the hands of an indifferent society.  As a Depression victim, she appears before a magistrate begging for assistance so that she may care for her sick mother.  She gets no sympathy, then goes home to find her mother dead.  She hardens quickly.  “This city’s going to pay me a living, a good living, and it’s going to get back from me just as little as I have to give,” she says with bitter certainty.

Blondie Johnson gently twisted movie storytelling and sexual stereotypes.  This time Joan was not a gangster’s female sidekick, she was the gangster.  She became that way by the malfunctions of government, not because of a predisposition to be bad as was often the case in roles played by Cagney and Robinson.  There is humor and authenticity in Blondie Johnson, and Joan enjoyed a personal success.  She showed a new command on screen, occupying the space with full, confident strides and persuasively shifting from charity case to tough Mafiosa to vulnerable woman in love.  It was a tidy hit at the box-office, grossing $325,000, more than twice its negative costs.

Joan Blondell: A Life Between Takes by Matthew Kennedy (2007)

Blondell was one of the workhorses of Warner Brothers in the pre-Code years.  Between 1931 and 1933, she made twenty-seven pictures–as many as Garbo made in her entire career.  Yet, for all that overwork, Blondell hardly ever had a false moment.  Self-possessed, unimpressed, completely natural, always sane, without attitude or pretence, Blondell was the same at twenty-two as she would be at seventy, in Grease(1978): the greatest of the screen’s great broads.  No one was better at playing someone both fun-loving yet grounded, ready for a good time, yet substantial, too.

Her best pre-Code role would come in 1933, with Blondie Johnson, as a gangland crime boss.  At the start, she is just a girl struggling to find work, so she can care for her sick mother.  She can’t get a job, can’t get government assistance, and one day she comes home and finds her mother dead.  The truth of Blondell’s reaction, her wild grief and sense of betrayal, underlies and gives dimension to the melodrama that follows.

The inevitable distaff version of the gangster film was Blondie Johnson (1933), featuring Joan Blondell in the Rico Bandello (Little Caesar) role.  Almost always, good girls gone bad have been forced to sin by extreme circumstances.  Whereas Little Caesar is congenitally bad, period, women go wrong for a reason, usually one in trousers, or in Blondie’s case, judicial robes.

When the spunky but penniless Blondie appears before a magistrate, pleading for help on behalf of her sick mother, she seems a nice enough girl.  Blondie has tried to find work, but the scarcity of jobs and the paws of brute men foreclose her options.  Unmoved, the stern government official brushes aside her pleas.  When Blondie returns home, her mother has died of pneumonia.  The same fate, she resolves, will not befall her.

Unlike the scheming minx of the bad girl cycle, Blondie relies on her smarts not her body, trading on her looks but not offering sexual favors.  She cons men to get ahead, but finally, she is a self-made, not man-made woman.  “I got plans–big plans,” she tells a would-be suitor.  “And the one thing that don’t fit in with them is pants.”  Like Rico Bandello and Tony Camonte (Scarface), Blondie Johnson is a criminal visionary with the grit to grab for her dream.  Like Rico and Tony too, she is brought down by a romantic fixation.  The man she loves has married another and perhaps betrayed her to the police.  She assents to his murder, but reconsiders and runs to his rescue.  Despite the mayhem and murder each has caused, they are sentenced to a token term of imprisonment of six years.  As a woman, Blondie can be redeemed and domesticated by true love.  A man would have been gunned down in the last reel.

The 1933 film Blondie Johnson typified the efforts of the inventors of the gangster to explore the new territory on which modern men and women interacted and to fashion values that would guide others over that terrain.  In an unusual plot variation, the eponymous heroine is a gang leader and thus a personification of women’s potential independence.  Trouser-clad Blondie, suggesting modern society’s blurring of conventional gender categories, is sarcastic, strong, and defiant, and she professes to care about nothing except her own material advancement.  The film centers on the problematic dynamics of power between men and women.  Warner Brothers publicity boilerplate played up that enticing angle:

In her long list of screen successes Joan Blondell has invariably been ruled by men.  She’s been slapped and cheated–often she’s been the sacrificing girl who lets “her man” go to another–but throughout the string of pictures in which she has appeared, a man has dominated her.  Now along comes Blondie Johnson…. As Blondie Johnson Joan not only refuses to allow the male to govern her, but she rules that species with a hand of iron.

Blondie is an exciting, sympathetic embodiment of women’s power.  Nevertheless, at film’s end, she reforms and recognizes not only the error of her criminal ways but, more important, the error of ignoring her female nature.  Finally admitting her love for the man who has pursued her, she promises to be faithful.  When he tells her, “you’re a fresh dame,” Blondie corrects him: “Sweetheart to you, Danny.”  The modern woman, the underworld again taught, could be and must be domesticated.

“All we want is to get a line on the judge.”

“Then you can give me your idea about the jury, see.”

“….and that sacred message rests under the heart of that little woman.”

…”The cruel mockery that we’ve perpetrating here makes me cast aside respect for statutes, to shout condemnation at man-made laws.”
“Should have had the Swede on the jury.”

“Those once big, shiny eyes of hers look now through tears toward woman’s greatest glory–motherhood.”

REEL 4 – “Working on his own–my racket–with that blond bag.”

“There’s no limit to this new field we’re going to get in.  Here’s your cut.”

Eliminate all view of Blondie distributing money, received from shakedown, to her confederates, Mae and Lulu.

REEL 5 – Eliminate all view of machine gun shown in opening in back of trick bar.

REEL 6 – Eliminate italicised words:  “And  as long as you and the boys are getting your cut, I don’t see why you worry about what I do.”

A complete record of cuts in motion picture films ordered by the New York State Censors from January, 1932 to March, 1933
Published by THE NATIONAL COUNCIL ON FREEDOM FROM CENSORSHIP
(Organized by the American Civil Liberties Union)

Blondie Johnson, which should, and perhaps could, have been one of the big (and when we say big, we mean BIG) Warner Bros. productions of the year, turned out to be only fair entertainment.

Its story, which deals with a woman racketeer who achieves big things in her line and who eventually is forced to have her racketeer lover put on the spot to satisfy the whims of her mob, is film matter which should carry a punch.  It somehow falls short of its expectations.  It is only the fine acting of Joan Blondell and Chester Morris that saves the picture from being an altogether total flop.

Joan Blondell’s emotional scenes in the opening shots of the picture are, in this writer’s estimation, about the finest bits of acting she has ever performed on the screen.  The rest of her sequences are devoted to idle chatter and many would-be smart cracks.

Ray Enright’s direction smacks of thoroughness while the photography of Tony Gaudio is both novel in its effects and intelligent for the picture runs along smoothly.  Earl Baldwin supplied the screen play.