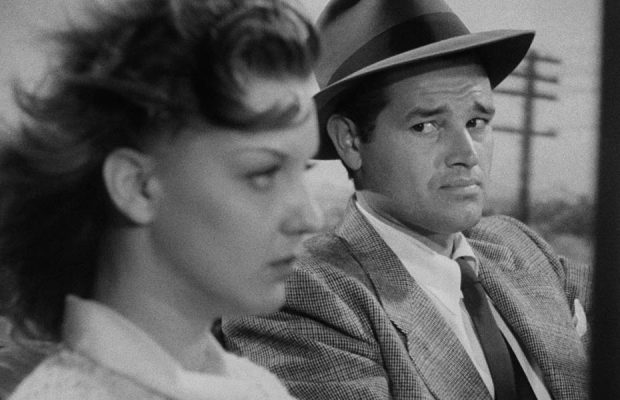 Al Roberts (Tom Neal) is a jazz and classical pianist fixture in a local nightclub in New York where he works as an accompanist to his fiancée, singer Sue Harvey (Claudia Drake), who has eyes on Hollywood. They both half-heartedly want to get married, but are unfulfilled in their careers. Sue leaves for Hollywood. Al stays in New York. Sometime later Sue calls from California and she’s working as a “hash slinger” (well, you gotta start somewhere). Tom decides to sell what he owns and hitchhikes across country to meet her. Eventually, a real piece of work, Charles Haskell Jr. (Edmund MacDonald) picks him up. Haskell tells Al that he’s a bookie who is driving to California, and that he picked up and kicked out a woman hitchhiker on the road as she was somehow unreceptive to his advances. When Al takes over the driving from Haskell, Haskell suffers a heart attack and dies. A befuddled Al, in a senseless panic, dumps Haskell’s body in the bush, takes the man’s money, and his car, and his ID, and then, in a Herculean feat of lunacy, assumes the man’s identity, as one does.

Both Director Edgar George Ulmer and lead actor Tom Neal’s careers took hits over chasing after someone else’s wife and they both paid a steep price for it, not dissimilar to this wonderfully lean bargain basement noir they collided in called Detour, but let’s start 40 years before that.

Ulmer was born in 1904 in Austria-Hungary, now the Czech Republic. Later in Vienna as a teenager, he studied architecture, which led to designing sets for Max Reinhardt (see Ann Savage’s Max Reinhardt connection below.) He went with Reinhardt to New York City and signed with Universal as a set designer. For a few years, he pinballed in various capacities, learning the industry from soup to nuts as an assistant director, art director, production manager, editor, technical director, producer, set designer, costumer designer, and even landed in the music department on Disney’s Fantasia (1940). Earlier in his career, Ulmer worked on F.W. Murnau’s The Last Laugh (1924), Sunrise: A Song of Two Humans (1927) and Fritz Lang’s Die Nibelungen: Siegfried (1924), Die Nibelungen: Kriemhild’s Revenge (1924), Metropolis (1927), and M (1931).

He worked with other notable directors including Robert Siodmak, Billy Wilder, and Fred Zinnemann. These experiences served him later when he directed The Black Cat (1934) with Boris Karloff and Bela Lugosi, The Strange Woman (1946), and many other films between 1930 and 1964.

Ann Savage was born Bernice Maxine Lyon on February 19, 1921, in Columbia, South Carolina. This fiery actor deserved many more roles than she received. In an interview with Skip E. Lowe, she noted that she attended Max Reinhardt’s acting school and worked in his office to pay for her tuition.

The school put on shows for talent scouts to view new actors leading to tests at both Columbia and Fox. She was told there were “too many blondes at Fox”, so she ended up at Columbia. Savage claimed notoriously difficult Columbia president Harry Cohn treated her wonderfully.

Ann Savage filmed one movie in 1942, and in an explosion of work over the next few years, she appeared in 20 movies between 1943 and 1945. Though she retired in the late 1950s, she had several minor roles decades later. Her last performance was in Canadian director Guy Madden’s acclaimed My Winnipeg (2007). Savage died the following year.

Thomas Carroll Neal Jr. (born January 28, 1914 in Evanston, Illinois) was the son of a wealthy banker, Thomas Sr, and Mayme Martin. Neal was an accomplished amateur boxer before his acting career.

Including Detour, Ann Savage and Tom Neal appeared in four movies together: Klondike Kate (1943), Two-Man Submarine (1944), The Unwritten Code (1944), and appeared together for the last time in 1955 in a TV episode of Gang Busters, “The Red Dress Case”. Savage and Neal reportedly didn’t get along. She called him “childlike”. It was almost like her loathing for Neal in Detour was real.

Both unlucky in love, Neal and Savage were each married three times. Tom Neal married actor Vicky Lane in 1948 and they divorced the following year. He then had a romance with actress Barbara Payton who moved on and became engaged to actor Franchot Tone. Payton, however, continued seeing Neal while engaged to Tone. In September 1951, Tom Neal, in a rage, mercilessly beat Tone with the latter suffering a smashed cheekbone, broken nose and concussion.

Payton married Tone after he came out of the hospital, but then went back to Neal. Tone filed for divorce in 1952 over Payton’s adultery. After all that was over, Neal and Payton broke up shortly after. This incident severely affected both Neal and Payton’s career.

Tom Neal got married again, but his wife Patricia Fenton died of cancer within two years, but not before giving birth to his only child, Tom Neal Jr.

Tom Neal later became a gardener in Palm Springs and started a landscaping business. During an altercation with his last wife, Gale Bennett, Neal claimed a gun accidentally discharged, shooting her in the back of her head and killing her.

Prosecutors sought the death penalty. However, a jury convicted Neal of involuntary manslaughter, resulting in him serving only six years in prison. On August 7, 1972, he was found in his bed dead of heart failure. Detour director Edgar G. Ulmer died one month after Tom Neal.

MY THOUGHTS ON DETOUR:

Al Roberts is a self-pitying pianist with a couple of dimes to his name, drowning in his uneventful life. He’s living in a threadbare relationship with his fiancée, Sue Harvey. He’s dead inside. Despite his protests to the contrary, this dirty world of scabs and scavengers that Vera, (who can’t even be bothered to own a last name) and Charles Haskell Jr. populate, is exactly what he wants and where he belongs. Roberts is coward and a liar. He’s lying to himself and everyone around him. He doesn’t want to settle down with Sue. He wants to feel something.

After an argument with his paramour Sue, what does Al do? He plays the best he ever has in a furious rendition of a Brahms waltz. He’s finally free of the straightjacket of his nightly set at the nightclub and does what he wants. He’s unshackled and ready for a new life. Hell, he even hits the jackpot, getting US $10 (1945) tip for his troubles, that’s CAD $221. in 2022. His going off script is the beginning of his life. Sure, Sue calls and he’s going to hitchhike to her in California, but he doesn’t really want to.

I’ve seen Detour many times over 30 years and initially I thought Al Roberts was a complete idiot, a rube. After the slimly Haskell keels over from what looks like a heart attack, does Al Roberts, with no crime record, just simply call the police and clear up the issue in 5 minutes?  “I was hitchhiking with this man, and he suffered a heart attack. He has medication for it in the glove compartment. Thank you, I’ll be on my way.” Nope. Does he flag down a passerby? Nope. Al Roberts doesn’t do that. Instead, he makes the insane choice to hide the dead man’s body off the side of the road in the dirt, and then steals all his money, his car, and his identity.

Initially, one would think Roberts a colossal fool, until one realizes that this life that Al Roberts stumbles into is the life Roberts wanted all along. Exciting. Unpredictable. Free of the repetition of the life he discarded. He’s a man now with money, a new identity and an unscripted future. He’s ecstatic. The only thing that would make him completely whole is a femme fatale. Al pretends that he is of high moral character while draping himself in the trappings of a criminal and murderer.

His self-delusion should be studied by doctors. When he meets Vera, he wants her to control and dominate him in ways that Sue wouldn’t. Only when one realizes that Al happily embraces this life do any of his actions make any sense. For the first time in his life he’s living, of sorts.

Charles Haskell Jr. is just the kind of catch you bring home to Mom for supper. He refers to women as “dames,” and “tahmaytahs,” and if you “give a lift to a “tahmaytah” you expect her to be nice don’t yah?”

On the surface, Haskell Jr. is a complicated character. On one hand, he’s a sleezeball rapist misogynist conman, and on the other he’s generous to Roberts, offering a ride, lively conversation, and even buys him dinner. Of course, it’s entirely possible Haskell Jr. is a raging narcissist who was looking for a captive audience in Roberts. He wants Roberts to ease his conscience. What’s Al going to do, disagree with him?

As we don’t know much about Vera, it’s more difficult to understand her motivations. A best guess is she’s had a hard life and she’s had to navigate the worst kinds of men. She’s a hitchhiker too. Vera terrifies me. About halfway into the movie, Al meets her on the road. At thirty-five minutes into the movie, Vera springs up from her car seat like a psychotic unhinged demon rabbit. What a performance.

Vera is the most frightening of film noir women I have ever seen. We see her in profile and then a half hour into the movie, it always feels to me like she is breaking the fourth wall and looking at us! It has always unsettled me and I’m not sure why.

Her words burn into his soul. A few minutes ago, it was a nice leisurely country drive. He was speculating about what a poor kid she may have been with her hair blowing in the wind. And there she is. She’s no kid. No sucker. She’s fast, vicious, her dialogue stabbing and corrosive. And that’s too bad, because any hope of a Doris Day-Rock Hudson meet cute has evaporated. His new partner is calling the shots.

Detour is an endlessly watchable wonderful fatalistic noir that for the last 30 years always feels like a half-remembered dream whenever I watch it. It has terrific direction and sparkling noir dialogue with Ann Savage spitting her venomous dialogue at Tom Neal. Savage gives one of the strongest and most acerbic performances in any noir film, A, B, or otherwise that I’ve ever seen. Her character really creeps me out. As long as you don’t think too deeply about the coincidences, the logic of Al Roberts’ actions, and the plot, you’ll be fine, because it’s terrific.

While the hapless Al Roberts’ life in Detour indeed seems tragic, it feels like a fun time at Disneyland compared to Tom Neal’s own dark life.