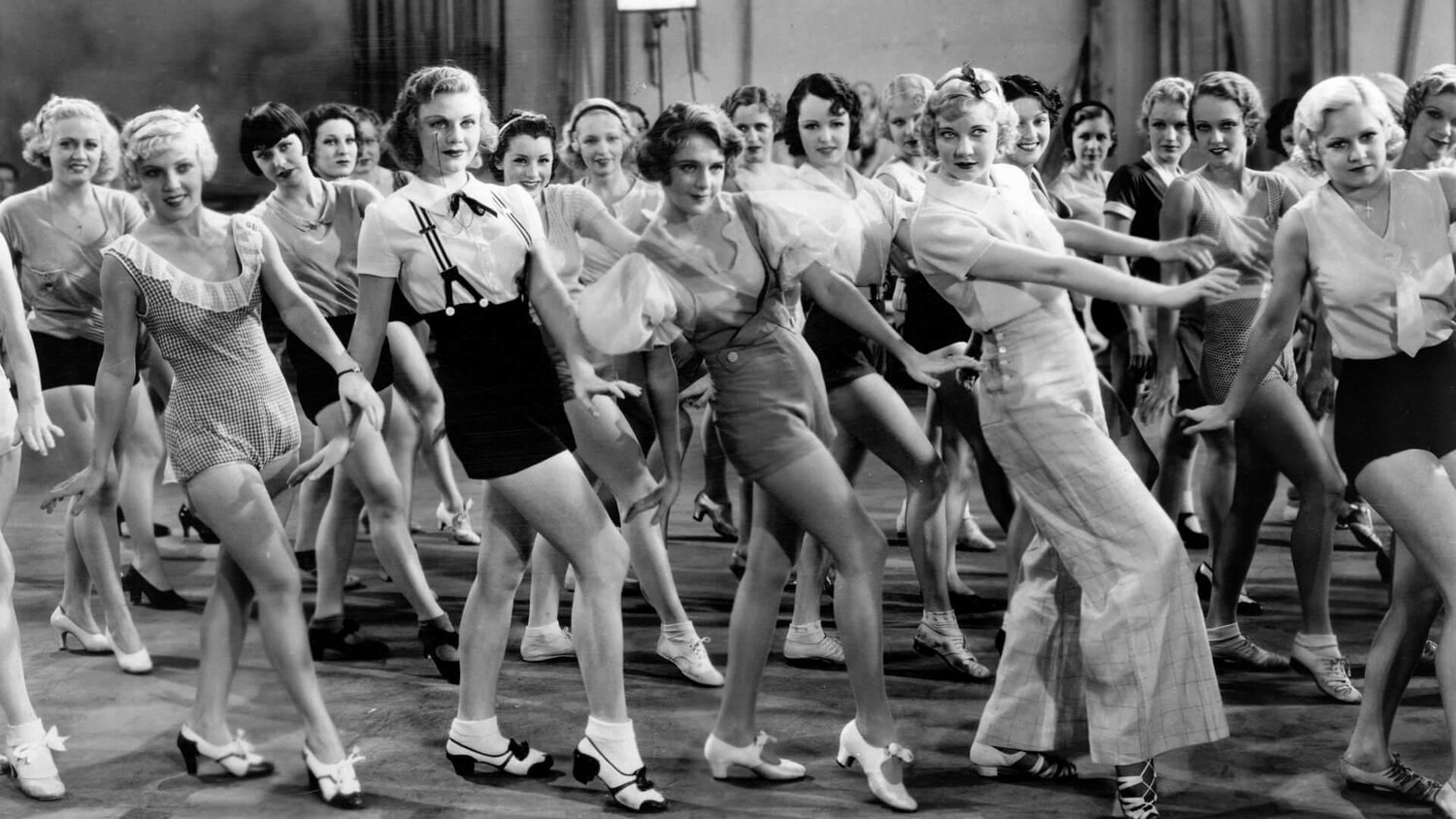 Warner Brothers created many firsts in the musical movie world.  They started movies singing in the first place.  Back in 1926 they produced the first full-length film with a complete musical score.  Don Juan, cleverly synchronized music and sound effects to heighten the mood and emphasize the action.  As a companion piece on the same programme, Warners presented a musical demonstration film featuring the New York Philharmonic, opera stars (Giovanni Martinelli and Marion Talley), instrumentalists (Efrem Zimbalist Sr. and Mischa Elman), and a Spanish dancing troupe.  The uncanny precision of timing the sound to the movement of the lips of the singers and the actions of the musicians was the result of a new method of combining sound discs and film–a process Warners called Vitaphone.  (Both Don Juan and the programme of shorts were shown last December at the Ontario Science Centre by Miles Kreuger, founder and president of the Institute of the American Musical, and our guest at this year’s film seminar at The Briars).

Less than a year later, Warners released The Jazz Singer with Al Jolson, followed by The Singing Fool and Say It With Songs.  The first movie operetta, The Desert Song, starring John Boles, Carlotta King and Myrna Loy, came from Warners.  So did the first colour musicals (On With the Show, Gold Diggers of Broadway).

By the early 1930s, public enthusiasm for both colour and musicals had tapered off drastically.  Critics were complaining about all the sound-alike, look-alike operettas.  The studios had turned out too much too soon, and were imitating themselves and each other to a ridiculous degree.  Musical movies ha become a thing of the past and even Warners didn’t make them anymore.

Then, in 1932, Warners filled a special train with stars like Preston Foster, Laura LaPlante, and Bette Davis and sent it roaring across the country on an exploitation tour.  The studio had something it thought worth promoting–and the “42nd Street Special” drew attention to it with its celebrity-filled tour.  Warners had made another musical!

42nd Street brought them back with a bang.  Vaguely based on their earlier On With the Show, it had a story that was dated even then but it introduced a new element–song and dance numbers created by Busby Berkeley especially for movies, bursting far beyond the bounds of what could be done on a stage.  There were new songs too, by Harry Warren and Al Dubin; new personalities like Ruby Keeler and Dick Powell, in addition to such established names as Bebe Daniels and Warner Baxter; lots of bright supporting people like Ginger Rogers; and above all, girls in abundance–all shown off by the Berkeley technique.  It was an immediate sensation.

More of a designer than a choreographer, what Berkeley lacked in choreographic talent he more than made up for in flair and imagination.  It didn’t matter if his leading players couldn’t dance or danced clumsily.  Reverse-action sequences, quick cuts, montages, mirrors, hydraulic lifts–he used them all, to stunning effect.  He used them so well that he almost single-handedly brought back the audiences which had stayed away from movie musicals in the first years of the decade.  His cameras did the dancing.  People and pianos, revolving doors and waterfalls, they were all props–movable parts of a gigantic choreographic jigsaw puzzle fitting together into endlessly fascinating visual patterns.

42nd Street is the backstage musical par excellence.  The casting is especially effective.  Warner Baxter had long been a respected film actor and Bebe Daniels, who began her film career in 1919, is perfect as the temperamental actress.  Dick Powell, signed by Warners one year earlier, had been given small parts in three films, but it was his appearance in this film that led to stardom.  Ruby Keeler made her movie debut in 42nd Street and became the principal discovery of the film.  She would go on to make nine musical films for Warners, seven with Dick Powell, before retiring from films in 1939.  It was Ginger Rogers’ thirteenth appearance in the two years she had been in Hollywood.  Character actors like Guy Kibbee and Allen Jenkins were players in what was virtually a stock company for the Warners’ musicals.

42nd Street became a landmark film.  It turned the tide for movie musicals, and helped Warners grow into a major studio introducing new, great talent.  With its success, Busby Berkeley was assured continuous employment for years to come.  The title finale, with its hints of the “story-telling” technique which Berkeley was to use later with even more skill is genuinely creative.  Th title tune, which hums in our ears throughout, is finally hitched to a visual set-piece of picturesque raffishness.  Massed tap-dancers, a mobile craning and tracking camera, and the final dolly on to Dick Powell standing at a bar and commenting “The big parade goes on for years/A melody of laughter and tears” make this a true Berkeley extravaganza.  We leave the theatre humming the songs.  Yes, 42nd Street proves that they can indeed put on a good show–even as early as 1933.