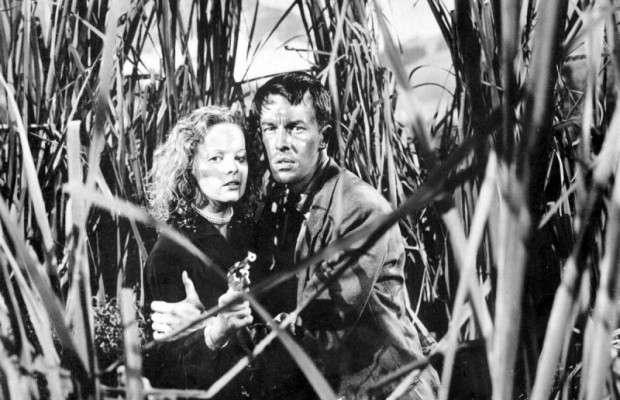 Toronto Film Society presented Gun Crazy (1950) on Monday, July 31, 2017 in a double bill with Born to Kill as part of the Season 70 Summer Series, Programme 4.

One way of looking at Gun Crazy is to see it as a story about star-crossed lovers.  If that brings to mind Romeo and Juliet, then continue onto another fork in the road to lovers Jennifer Jones and Gregory Peck in 1946s Duel in the Sun or again Jennifer Jones and Charlton Heston in 1952s Ruby Gentry.

Director Joseph H. Lewis, a noir veteran, began his career in the 1930s, directing westerns for Universal and Columbia, and became known by the crew as “Wagon Wheel Joe,” for his habit of dragging half a broken wagon wheel from shot to shot, urging the cameraman to frame each scene through the spokes of the battered wheel for an added Brechtian effect.  Abandoning westerns, Lewis began a frenzied round of freelancing that took him from Poverty Row studios to the majors, with such films as the 1942 disquieting horror Universal film The Mad Doctor of Market Street and the astonishing Secrets of a Coed (aka The Silent Witness) also 1942, which opens with a continued ten-minute take of a courtroom scene that predates Alfred Hitchcock’s 1948 long-take experiments in Rope.  Lewis designed the shot starting off in a wide shot, then moving across the jury box to get close-ups of the witness stand, the judge, and various shots of the spectators—all in one continuous take.

In Gun Crazy you will notice a three-minute, twenty-seven-second uninterrupted take, as Laurie looks for a place to park.  They are attired as cowboys, garb which suggests the unpredictable danger of the Old West, as well as the couple’s instability.  Similarly, the pair’s intermittent periods of privation suggest the urgency of a Great Depression story, but that, too, is past.  This is 1950, when the American economy was on a postwar rebound and jobs were becoming plentiful.  It’s not just that our couple are anachronisms reminiscent of the Old West and the Depression—the truth is that they are lazy!  And our characters are both aware of this.

But back to 1945, when Lewis directed My Name is Julia Ross which is as equally dazzling as his two films of 1942 above, he worked for Columbia’s “B” unit, where he had much better technical facilities and capable performers, such as Dame May Whitty and George Macready, at his disposal.  The film is a remarkably inventive psychological suspense thriller, in which a young woman is drugged and forced to assume the identity of a psychopathic killer’s dead wife; for 65 minutes, it creates a genuine mood of suspense.  Nina Foch is excellent in the title role.  Lewis then went on to direct his two most famous films, tonight’s Gun Crazy and 1955s The Big Combo.  Both films were done on a shoestring, and both use long takes for the sake of economy, achieving a near-documentary feel in certain sequences that adds to the realism of each film.

Russell Harlan’s cinematography is breathtaking and varied: documentary-like during the robberies and deeply expressionistic when the couple suffer and love together.  Bodies are bisected or swallowed by shadows and many closeups are startling in their emotional immediacy.  Lewis was enamored of the faces of both of his stars and pulled us unusually close to them, so that we may feel attached to them, rather than distain for them.

Noir aficionados have long hailed Lewis’s Gun Crazy (aka Deadly is The Female) as the director’s masterpiece, a film shot on a non-existent budget for the notorious King Brothers, who specialized in producing low-budget tales of violence, such as Max Nosseck’s Dillinger starring tonight’s Born to Kill’s star Lawrence Tierney.  Jean-Luc Godard and Francois Truffaut were two of the Cahiers du cinema critics who were astounded by the film when it first appeared, and Lewis became a darling of the Nouvelle Vogue.

Gun Crazy was written by MacKinlay Kantor, adapting his Saturday Evening Post short story, in collaboration with blacklisted writer Dalton Trumbo, who used his “beard” Millard Kaufman to get past the HUAC watch-dogs.  So enjoy!

Sourced from Film Noir and the Cinema of Paranoia by Wheeler Winston Dixon (2009) and Film Noir FAQ by David J. Hogan (2013)

Joseph H. Lewis found his métier, if not his personal vision, in the popularity of the film noir.  From My Name is Julie Ross (1945) on, all his successful films were either outright films noir–Gun Crazy, Undercover Man (1949), The Big Combo (1955), A Lady Without Passport (1950), –or contained maudit elements–Desperate Search (1953), So Dark The Night (1946), Cry of the Hunted (1953), A Lawless Street (1955), The Halliday Brand (1957), Terror In A Texas Town (1958).  Upon these films–of varying quality, but none without interest–Lewis’s reputation rests.  Though it seems difficult to claim for Lewis a consistently black vision, his visual style contained several elements conductive to the genre; a taste for Bazinian depth of focus; and for its temporal twin, the long take; for camera movement rather than alternating static cuts; for cinematographers with dramatic, concrete styles, often harshly black and white; for naturalistic location shooting, or, failing that, for modestly scaled back-lot work stressing character/environment interactions rather than explicit spectacle.

Gun Crazy is regarded as the best film Lewis made.  In many ways, the film is Lewis’ most simple work, and so his most consistent.  The integration of character and action, and the operation of amour fou in the film are the clearest realizations of these elements which underlie other Lewis films.  The long take sequences, the cramped interior shooting, the staging of a scene in which the characters walk away from the camera, turn their backs to the screen and continue their dialogue, and the constant return to John Dall’s face as the basic image and motif of the film, can all be seen as extremely influential pre-nouvelle vogue elements.

Lewis achieved sequences in Gun Crazy that were unprecedented in American film.  His famous single-take bank robbery reconciled budget problems and dramatic impact with imaginative flair.  The location shooting gives the film a feel totally out of keeping with its period, and much of the staging and framing antedates the Jean-Luc Godard of Vivre Sa Vie (1962), and Bande A Part (1964).  The freshness of Lewis’ direction closely parallels the giddy elation of his lovers, as he daringly attempts “impossible” shots and stunningly brings them off.  The robbery of the Armour Meat Packing Plant, covering no less than six locations, is organized with exemplary narrative lucidity, enabling Lewis to let the whole operation go surprisingly awry and to have the audience recognise the slipups as immediately as the participants.  We experience the exhilaration and tension and rush of bravado as they do.  Gun Crazy  entices the audience into the dizziness of irresponsibility.  Contrasts with the other “Bonnie and Clyde” films are instructive.  In They Live By Night, the couple risks a night out because of their deep desire to live like “normal people”, but the forces of normal society won’t leave them alone.  In the comparable sequence in Gun Crazy, the couple go out for the sheer daring of it, as one more jolt to sustain their relationship.  Their own incaution gives them away.  Similarly, when Bonnie and Clyde visit home, the scene is a nostalgic idyll, concocted only to be shattered by the mother’s clear thinking.  No such clear thinking burdens Dall and Cummins as they eventually flee back to his sister’s place.  When they go there, it isn’t because of some fatalistic apprehension of impending disaster (as with Faye Dunaway’s Bonnie), but because, quite simply, their jig is up, their crazy passion has faltered, there is no place left to go.  When the car stalls in the penultimate chase, Lewis’ two frontal close-ups emphasize that their amour fou has lost its sustaining energy.

Kings of the Bs by Myron Meisel