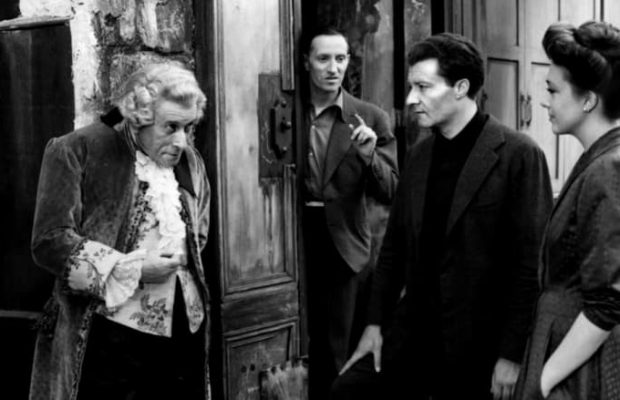 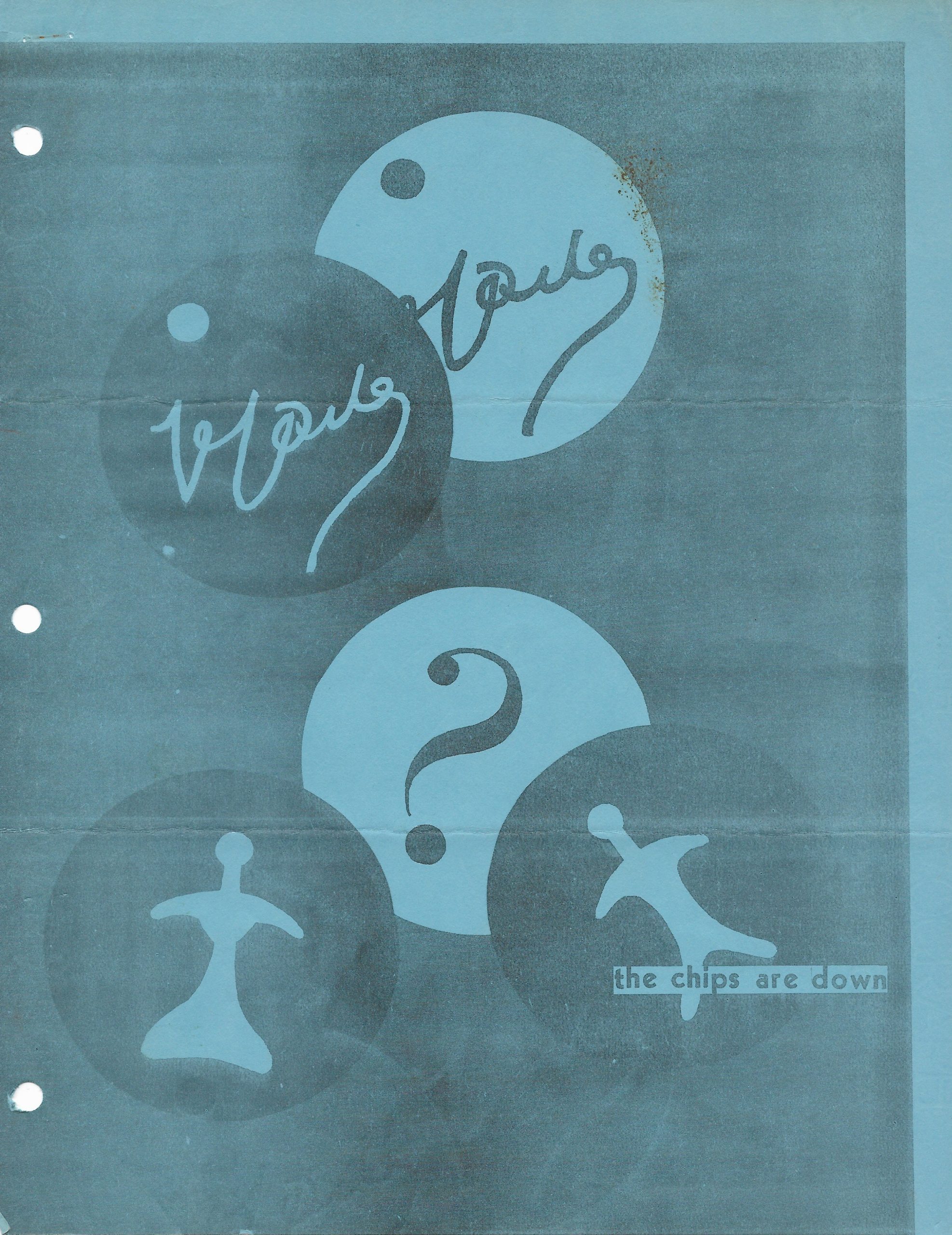 The producers call this film a “Related Documentary”.  A highly original blend of satire and poetry, it presents a humorous and poetic impression of the California Beach, contrasting the languors of a summer afternoon with the fervour of exercise devotees.  The witty counterpoint of sound (the song) and image reflects the charming pliancy of its mood; the whole is a unique virtuoso achievement.

This film, one of the shorts with which Carl Dreyer of Passion of Jeanne D’Arc and Day of Wrath fame has been associated, is a study of Kronborg Castle at Elsinore.  It was there that Shakespeare is supposed to have played with an English troupe of actors.

The Danish commentary gives the historical background of the castle.  It stands at the entrance to the Sound at the narrowest point between Sweden and Denmark and was originally built about 1420-25 by the King of Denmark in order to enforce a toll imposed on Foreign vessels entering the Sound.  The cannons are still turned against the sailors of the Sound; the coat of arms of Frederick the Second who re-built the castle on the old foundations in 1574 is still over the entrance gate.  About 1600 a troupe of English actors arrived at the castle to perform before the court of Frederick.  If Shakespeare accompanied them, he saw the interiors as they are today–the Chapel with its woodcarvings, the Knights’ Hall where a scene is re-enacted as it might have been played at that time.  Back to the present, the commentary explains that today the courtyard of the castle is the background for performances of Shakespeare’s “Hamlet” revived every summer by the Royal Theatre Company from Copenhagen.

Imagination in the treatment of many details grace the film: the moving camera as it surveys the exterior of the castle and pokes around it; its entrance into the castle and scrutiny of the carvings, with quick cuts on the sound of footsteps–these are a few.  In the sequences with the actors the style changes, which some will regret, however the cutting and soundtrack remain outstanding.

This is a most attractive and sensitive film; the text, beautifully read by Vincent Price, composes harmoniously with the images to make up something fresh and personal.  If the design is rather loose, the film holds by its continuity of genuine feeling.  A love of place is really conveyed.

The following quotation is from a letter Mr. Stauffacher wrote to the Society regarding his film:

“San Francisco as a city has such obvious visual qualities that it always struck me as almost criminal that no documentary film treatment had ever been even attempted, save for one boring travelogue made in the Fitzpatrick tradition, which, as a matter of fact, made San Francisco considerably duller than most travelogues.          …………The filmic style I used was not new.  I think it was influenced to some extent by Basil Wright’s Song of Ceylon, as well as certain lyrical documentary minds like Rouquier’s, Franju’s, and Flaherty’s.  The narrative, taken from Robert Louis Stevenson, was part of a piece of journalism he did for The London Art News Magazine, in 1882.  As used in the film, the text is considerably edited since Stevenson’s own medium, so masterfully used, pictured San Francisco in words that hardly needed illustration.  The footage was shot in 1951, and then due to other commitments, was laid aside until the summer of 1952.  During that interlude my whole concept of film style had changed and perhaps progressed.  Thus, when I edited the footage I was at odds with my original fancy, but could not shoot further material to alter that original conception.  So it was put together along the lines of the first plan.  As a result, I personally feel that while some parts of the film are successful, other parts are not, that the cutting should have been tighter, more material removed, the rhythm made more concise, and especially, more shots of people, less of architecture and vistas….. but at least it was an attempt to convey the atmosphere of the place and avoid the usual pictorial clichés.” 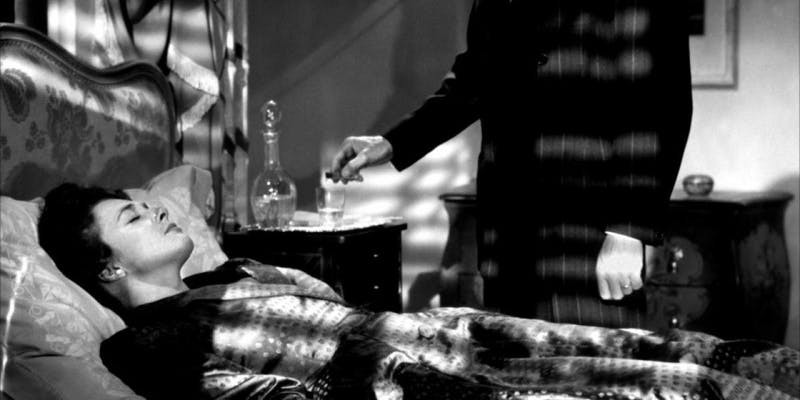 This is an interesting film, and a hopeless one.  The after-life is treated in a matter-of-fact manner, the alive and the dead mingle, the dead feel emotions like love, pity and curiosity, but they cannot kiss or touch each other.  It tries to prove that love is only strong when no other interests intervene; a despairing theory proving the weakness of human nature.  It is a good piece of “theatre” with all dramatic effects, well written dialogue and directed with insight and conviction.

In a visit to the set of Les Jeux Sont Faits at Pathe Studios, Jean Vietti writes in Compagnie France film ….. ‘We tried, naturally, to get some information on existentialism.  But Sartre said to us:

“It is not something which is explained in one or two words.”

But if Sartre the philosopher reveals himself with discretion, Sartre the scenarist is, on the contrary, much more open to gossip:

“Les Jeux Sont Faits is a scenario which I wrote in 1942, long before my play “Huis Clos”…..  It is not at all an existentialist subject.  It is a love story between a bourgeoise woman and a working man.”

According to replies to the above received by us, the feature film most enjoyed by members last season was Louisiana Story, closely followed by Orphee, Trouble in Paradise and The Strong Man–none more than one or two votes apart.  Of the remaining features, Partie de Campagne, Variety, Nanook of the North, Mother, and Rubens all received votes in that order.

The most enjoyed documentary was Coral Wonderland, closely followed by Critic & Film on “Odd Man Out” and Works of Calder.  Then, Nanook of the North, Land of the Long day, Louisiana Story, and Uirapuru.

In the best made feature category, Louisian Story and Orphee also led the poll, with Variety, Trouble in Paradise, Mother, Partie de Campagne, and Nanook of the North following in the order named.

The best made documentaries (in order) were thought to be Industrial Britain, Works of Calder, Louisiana Story, and Land of the Long Day; followed by Nanook of the North, Critic & Film on “Odd Man Out” and Coral Wonderland.

In the vote on outstanding experiments, Neighbours was a standout, with Barn Dance a good second, followed by Lot in Sodom, Uirapuru, Rubens, La Rose et le Reseda, Night Lights, A Phantasy,  Propos de Nice, and Object Lesson, in that order.

Though we appear to have neglected to ask for a vote on “shorts”, many members marked preferences anyway, with these results:  Gerald McBoing Boing leading, Man Who Snatches Lightning Conductors second–followed by Chess Fever, The Champion, Spring ’52, in the order named.

Now for the least enjoyed films!  Rubens proved to be an easy winner, with Mother and Lot in Sodom close behind–then, in order,  A Propos de Nice, Object Lesson, Orphee, Night Lights, Land of the Long Day, Variety, Barn Dance, The New York Hat, La Rose it le Reseda, The Seventh Age, Partie de Campagne, and Spring ’52.  42% of members replying were “sorry” that their least enjoyed films had been shown:  58% were not.

Among “Pet Peeves”, many, while expressing much appreciation of experimental films individually, objected to so many being shown on one program, feeling that this was hard to take and dissipated their impact.  A few members objected to the showing of Russian films on ideological grounds; some did not like silent films, etc.

Pickings have been fairly lean in the movie houses during the summer, but there have been bright spots, and one brilliant one–Rene Clair’s stylish and delectable Less Belles de Nuit (Night Beauties).  Then there were: Walt Disney’s wonderful animal documentary Bear Country; two good John Mills vehicles, The Long Memory and The Gentle Gunman; Elia Kazan’s interesting and suspenseful Man on a Tightrope; The Moon is Blue, important only as the landmark in film history when a movie producer (Otto Preminger) finally had the guts to defy the Production Code and the Legion of Decency and get away with it–otherwise good fun, strictly as a photographed play, and actually quite harmless; Lili, Charles Walters’ charming, delicate romantic trifle with Leslie Caron’s lovely performance; The 5,000 Fingers of Dr. T, Stanley Kramer’s highly unusual if not altogether successful excursion into fantasy; Vincente Minnelli’s The Band Wagon, the best current musical, rather spotty but with some fine numbers and colour decor; The Titfield Thunderbolt, in which Ealing Studios add Technicolor, sympathy and excitement to their successful comedy formula; Sky Full of Moon, one of MGM’s enterprising lower-budget program, decidedly fresh and agreeable; Shane, George Stevens’ superior Western job (marred somewhat by the Imperial’s wide-screen and stereo-sound shenanigans, but worth a visit to a “normal” neighborhood showing); and The Steel Trap–to me the surprise of the year–I can scarcely recall a film with such fabulous sustained suspense!